Through Friday, the S&P 500 was down almost 8% for the month and the Nasdaq was off 12%, falling into correction territory, defined as a 10% decline. 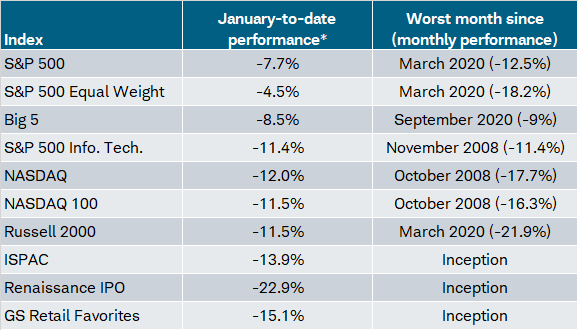 Major market indexes continued their decline Monday with the S&P 500 slipping into a correction before reversing their declines by day’s end. By mid-afternoon Tuesday, they had resumed their descent and the S&P 500 and Nasdaq had lost another 1.7% and 2.2% respectively.

“The heightened weakness this year — on and below the surface — have the added kicker of a murkier corporate earnings season and the Federal Reserve’s pivot to tighter monetary policy,” Sonders writes.

Fewer companies are beating earnings expectations, and those that do are exceeding consensus forecasts by smaller amounts compared with the past six earnings seasons, she adds.

Investors are now waiting for the Federal Reserve to more fully reverse its easy monetary policy, hiking interest rates and ending its asset purchases, rather than just reducing them, which has already begun. The Fed “is still adding” to its balance sheet even though it has started to taper its securities purchases and it hasn’t started to raise interest rates, writes Sonders.

Fed policymakers are meeting Tuesday and Wednesday to decide on next policy moves — hiking rates and shrinking its $8 trillion balance sheet.

“This week’s Fed meeting will be all the more interesting with the backdrop of this month’s market weakness; and deteriorating near-term economic outlook,” says Sonders.

Moody’s Analytics and Goldman Sachs have lowered their first quarter GDP forecasts to an annualized growth rate of just 2%, down from 5% and 3%, respectively. Jefferies has cut its Q1 GDP growth forecast to just 1.5%.

Investors around the world are eagerly awaiting the Fed’s latest statement and after-meeting press conference, listening for when the Fed intends to start raising rates and reducing its balance sheet.

Economists are forecasting four to five Fed rate hikes in 2022, beginning in March, to battle rising inflation — the consumer price index surged 7% in 2021, a 39-year high — and an announcement by the Fed as early as March about plans to shrink its balance sheet later in the year.

“A shift in the monetary policy backdrop can mark significant turning points in the equity market and typically lead to more frequent bouts of volatility,” writes Sonders.