For First Time, Renewables Surpass Coal in US Power Mix

For the clearest sign yet that renewable energy has gone mainstream, consider this: Clean-energy resources supplied more of America’s electricity than coal for the first time ever in April.

Hydroelectric dams, solar panels and wind turbines generated almost 68.5 million megawatt-hours of power in April, eclipsing the 60 million that coal produced that month, Energy Information Administration data released late Tuesday show. That’s the most clean power the U.S. has ever made — and the least coal it has burned for power in years. 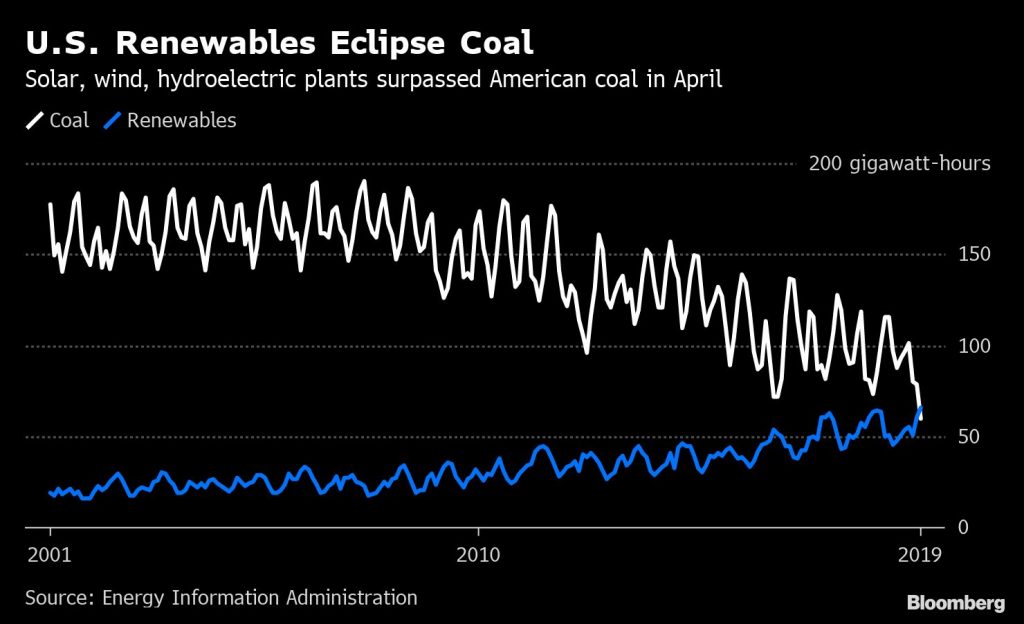 The shift comes as power plants fueled by cheap natural gas are crushing the economics of coal. But it’s also a testament to the rapid development of solar and wind farms across the country. The two forms of power have become so cheap to build that BloombergNEF is projecting that half the world’s power may come from renewable energy by 2050.

The onslaught of clean power is coming largely at the expense of coal, which only a decade ago supplied more electricity in the U.S. than anything else. The mining industry is collapsing even as President Donald Trump works to restore coal to its former glory by gutting environmental rules.

Quiz: Do You Know These Annuity Tax Facts?

Russia's Dirty Oil Crisis Is Worse Than Anyone Predicted

The clean-energy industry should enjoy this moment while it lasts. One of the main reasons coal-fired power plants produced so little in April was because some were down for routine, spring maintenance. Coal is forecast to return to its perch as the second-biggest source of electricity — after natural gas — as those units return to service and demand peaks this summer. Even by 2028, hydro, wind, solar and biomass are expected to have a slightly smaller combined footprint in the U.S. than coal, according to a report this week by Fitch.

But the trend is clear: Renewable energy will continue to eclipse coal in future months as more wind and solar farms are deployed, EIA’s forecasts show.

(Michael R. Bloomberg, the founder and majority stakeholder of Bloomberg LP, the parent company of Bloomberg News, has committed $500 million to launch Beyond Carbon, a campaign aimed at closing the remaining coal-powered plants in the U.S. by 2030 and slowing the construction of new gas plants.)

Russia's Dirty Oil Crisis Is Worse Than Anyone Predicted