Oil explorers still reeling from the late-2018 price collapse shut down drilling rigs in the biggest U.S. field and elsewhere at the fastest pace in almost three years.

The number of working oil rigs plunged by 21 this week to 852, the lowest since late May, according to data released Friday by oilfield-services provider Baker Hughes. A 26 percent surge in American crude prices since Christmas Eve has failed to reassure management teams chastened by a fourth-quarter price collapse that crushed drilling plans and wiped out speculators.

Schlumberger Ltd. earlier on Friday predicted a slump in North American shale investment this year and slashed its 2019 spending plan to conserve cash. Oil explorers are reluctant to expand activity without more concrete signals that the recovery will endure. In fact, the rig fleet may continue to shrink, according to Colin Davies, an analyst at Sanford C. Bernstein & Co.

“Drilling rigs have remained relatively resilient” through market gyrations, Davies wrote in a note to clients before Friday’s report. “Drillers will begin to get more scrutiny as rig count flattens and begins to fall.”’

In the Permian Basin of West Texas and New Mexico, seven rigs were deactivated, the data showed. Although the drilling fleets in other major U.S. shale fields remained stagnant or inched higher, 18 rigs were idled in a category of miscellaneous regions that Baker Hughes groups under the “others” tab.

Oil production in the U.S. rose to a record 11.9 million barrels a day last week, according to the Energy Information Administration. On Friday, oil futures rose as much as 3.5 percent to a six-week high of $53.90 a barrel on the New York Mercantile Exchange. 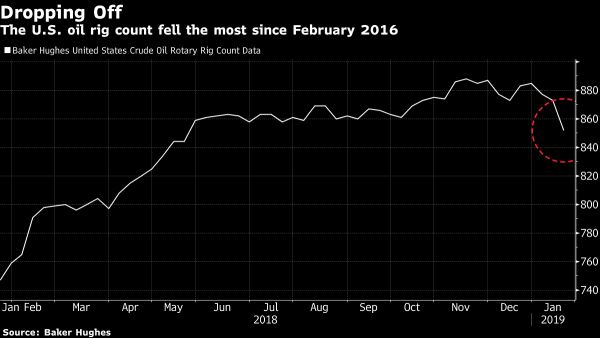