The SEC charged the traders for lying about massive derivatives losses and also charged several microcap companies and stock promoters in penny-stock schemes.

Recent enforcement actions included charges brought by the SEC against two JPMorgan traders associated with the “London Whale” for lying about massive derivatives losses, and against a number of microcap companies, their CEOs and stock promoters in penny stock schemes. In addition, FINRA fined and censured VSR Financial and registered principal Donald Beary over sales of nonconventional investments.

Javier Martin-Artajo and Julien Grout, former traders at JPMorgan Chase & Co., were charged by the SEC with fraudulently overvaluing investments in order to hide massive losses in a portfolio they managed.

The pair worked in JPMorgan’s chief investment office (CIO), which created the portfolio known as the Synthetic Credit Portfolio (SCP) as a hedge against adverse credit events. The portfolio was primarily invested in credit derivative indices and tranches, and Martin-Artajo and Grout were required to mark the portfolio’s investments at fair value in accordance with U.S. GAAP and JPMorgan’s internal accounting policy.

However, improving credit conditions and a change in investment strategy caused the portfolio’s losses to mount. Instead of marking the investments at true value and reporting that fact, the two conspired to conceal the losses instead, and cooked up fraudulent valuations of hundreds of positions. When these were reported to management, they caused JPMorgan’s reported Q1 income before income tax expense to be overstated by $660 million.

According to the SEC, Martin-Artajo instructed Grout how to mark the portfolio’s investments so that, instead of being priced based on the midmarket prices contained in dealer quotes the CIO received, the positions instead were marked at the most aggressive end of the dealers’ bid-offer spread. Several times Martin-Artajo even gave Grout a desired daily loss target to work with. Grout had to keep a spreadsheet to keep track of the differences between the actual midmarket prices that should have been used to price the positions and the marks he actually used.

By the middle of March, the spreadsheet indicated a spread of $432 million between the phony prices and the real ones, and Martin-Artajo told Grout to wait till March 30, against JPMorgan’s policies, hoping that better prices after London trading closed would provide U.S. market activity that would support better marks for SCP’s positions.

The two kept at their deception till late April, when trading counterparties raised collateral disputes over positions amounting to more than half a billion dollars. In short order, the two lost their marking authority and the bank began to value the book at the consensus midmarket prices.

In a parallel action, the U.S. Attorney’s Office for the Southern District of New York also announced criminal charges against Martin-Artajo and Grout.

Four microcap companies, their CEOs and five promoters were charged in the SEC’s ongoing crackdown on penny stock schemes in the Florida area.

Charges were filed against Health Sciences Group (HESG) formerly based in Indian Harbour, Fla., and now based in Newport Beach, Calif., and Thomas Gaffney, its president and CEO, of Satellite Beach, Fla.; Nationwide PharmAssist Corp., based in Boca Raton, and Stephen Molinari, its chairman and CEO, of Boca Raton; Redfin Network (RFNN), based in Fort Lauderdale, and Jeffrey Schultz, president and CEO, also of Fort Lauderdale; and VHGI Holdings (VHGI), based in Fort Worth, Texas, and its CEO, Douglas Martin of Wellington, Fla.

The SEC said that the Health Sciences Group/Gaffney scheme involved an arrangement to pay an undisclosed kickback to a pension fund manager in exchange for the fund’s purchase of restricted shares of stock in the company. The scheme involving Nationwide PharmAssist, together with Molinari and Balbirer, focused on agreements to pay undisclosed kickbacks to hedge fund principals in return for their funds’ purchase of restricted shares.

Other schemes involved the arrangement of inducement payments by officers or promoters of penny stock companies to coordinate the manipulation of their stock. Those who arranged the payment of bribes to create fictitious market movement were Redfin Network and Schultz, its president; VHGI and its CEO Martin; and promoters Greene, Santamaria, and Simon. Freedman, on the other hand, arranged to pay an undisclosed bribe to a stockbroker who agreed to purchase a microcap company’s stock in the open market for his customers’ discretionary accounts. The agency seeks financial penalties, disgorgement of ill-gotten gains plus prejudgment interest, and permanent injunctions, as well as penny stock bars against each of the officers and promoters, and officer-and-director bars against Gaffney, Martin, Molinari, and Schultz.

VSR Financial Services of Overland Park, Kan., and registered principal Donald Beary were censured and fined by FINRA over the firm’s failure to have in place a supervisory system to review nonconventional investments, and Beary’s failure to implement written supervisory procedures relating to a discount program.

The firm’s WSPs provided that no more than 40%–50% of a client’s exclusive net worth could be invested cumulatively in alternative investments unless there was a substantial reason to do so, with documentation to back it up. In addition, the firm, through Beary, created additional procedures that applied a discount to some nonconventional instruments that reduced the percentage of a customer’s liquid net worth invested.

Not only that, but on top of the 40%–50% net worth concentration limit for alternative investments, the firm’s new account form asked each client to specify the percentage of liquid net worth he or she would be comfortable investing in various risk categories. Most alternative investment program sponsors identified their products as having a high degree of risk, but the firm assigned its own risk category to each of the alternatives it sold — and these risk categories were routinely assigned lower risk categories than their own sponsors provided. Several times the firm dropped the internal risk rating it had already assigned to an investment once it agreed to sell the product.

The firm also failed to document alternative investment levels that exceeded the concentration guideline, as well as failing to document substantial reasons to exceed that guideline, despite its WSPs requiring it to do so. FINRA cited additional failures, including the firm’s recommending high-risk investments to clients for whom they were unsuited and failed to supervise the actions of its registered representatives regarding these unsuitable transactions.

The firm was fined $550,000 and Beary $10,000; both consented to the sanctions and entry of the findings without admitting or denying them. 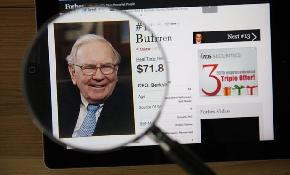 The Oracle of Omaha's holding company, Berkshire Hathaway, shares a breakdown of its portfolio.

Schwab to Buy $10.5B RIA Focused on Fixed Income

Schwab says the deal with Wasmer, Schroeder & Co. will complement its fixed income offerings and expand its SMAs.