Sales of previously owned U.S. homes fell to the weakest pace in more than three years, falling short of estimates and indicating the housing market remained in a slowdown as the year ended.

Contract closings decreased 6.4 percent from the prior month to an annual rate of 4.99 million in December, the National Association of Realtors said Tuesday. The median sales price rose 2.9 percent from a year earlier, the least since February 2012, to $253,600, while inventory increased.

The latest results brought the 2018 tally to 5.34 million, the weakest pace since 2015. Analysts expect economic growth last quarter got little help from the industry.

Declines in both single-family and condominium sales indicate the residential real estate industry was struggling to gain traction as elevated property values and a lack of affordable listings discouraged buyers, though more inventory has become available compared with past years. 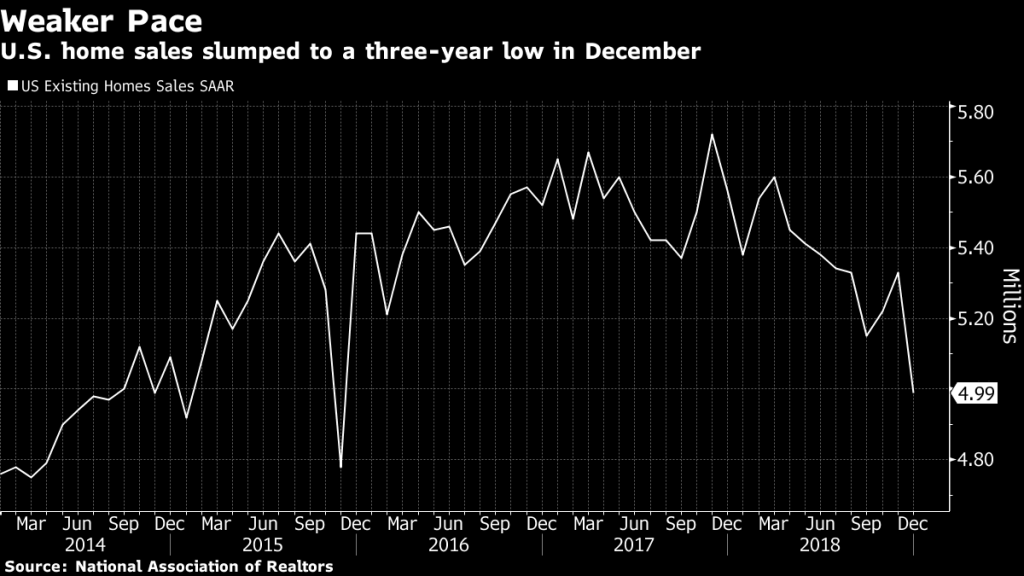 While home-price growth is cooling, it’s been outpacing gains in worker pay for several years. That’s kept buying out of reach for many Americans, especially young people who are also saddled with student loans.

Nonetheless, a tight labor market is underpinning demand. “Affordability is more important than jobs,” NAR Chief Economist Lawrence Yun said at a briefing in Washington, referring to the softer results despite a strong labor market.

Several consecutive months of rising inventory could lead to more-tepid price gains, Yun said in a statement, adding that lower mortgage rates also may revive sales in the spring. Borrowing costs are near the lowest since April, and loan applications have surged in recent weeks.

The NAR report is likely to be more closely monitored than usual as the government shutdown has delayed the release of key official data such as on housing and residential construction.

So far, a majority of realtors are reporting little impact from the closure, Yun told reporters. Home purchases fell in all four regions, led by a 11.2 percent decline in the Midwest and 6.8 percent drop in the Northeast.

Economists surveyed by Bloomberg had projected a 1.5 percent decline in sales to a 5.24 million pace. At the current pace, it would take 3.7 months to sell all homes on the market, down from 3.9 months in November though higher than a year earlier; Realtors see less than five months of supply as a sign of a tight market.

Existing-home sales account for about 90 percent of U.S. housing and are calculated when a contract closes. New home sales make up the remainder of the market and are seen as timelier, because they’re counted when contracts are signed. Those figures are currently being delayed, however, because of the shutdown.