Oil Drops Most in 3 Years as Investors Flee Darkening Outlook

Futures plunged 7.1 percent in New York on Tuesday for the biggest one-day drop in three years. OPEC’s dire forecast for 2019 demand came at a time of steadily rising American production and stockpiles. Trump admonished Saudi Arabia for planning to curb output and lamented prices that settled below $56 a barrel for the first time in a year.

“This tweet certainly did not help prices,” said Warren Patterson, a senior commodities strategist at ING Bank NV. “Given the growing global surplus over the first half of 2019, OPEC will likely try to ignore President Trump’s call as much as possible.”

West Texas Intermediate futures have fallen for a record 12 sessions on fears that a supply glut similar to the price-killing surplus of 2014 is redeveloping. In London, Brent futures have declined in 11 of the past 12 sessions. Money managers’ combined bullish positions in WTI and Brent sank to the lowest in 14 months as of Nov. 6, Commodity Futures Trading Commission data show, as long positions shrank and shorts increased. 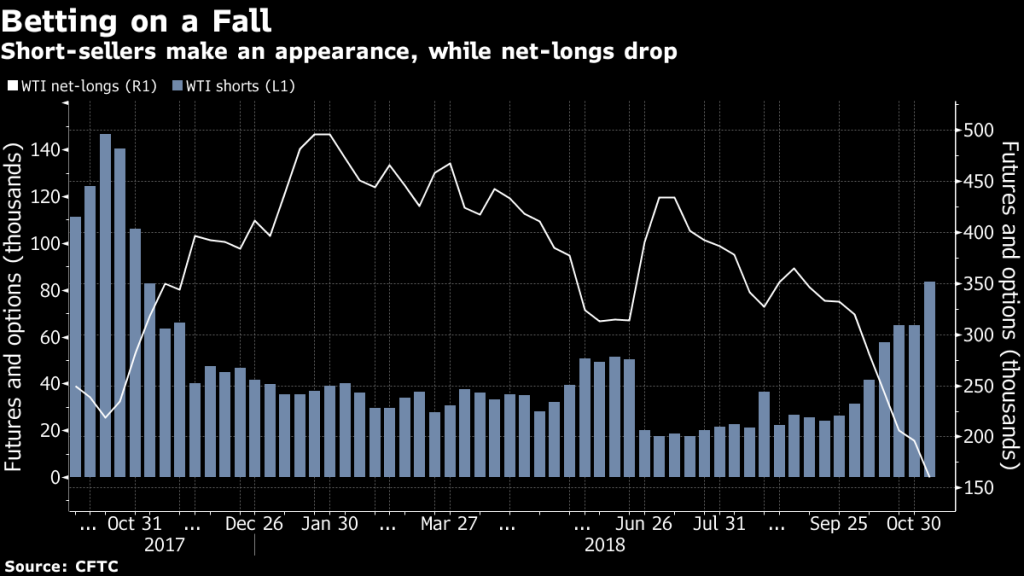 WTI for December delivery dropped $4.24 to end the session at $55.69 a barrel on the New York Mercantile Exchange. Total volume traded Tuesday was about 90 percent above the 100-day average.

Brent for January settlement closed down $4.65 at $65.47 on the London-based ICE Futures Europe exchange. The global benchmark crude traded at a $9.63 premium to WTI for the same month.

A closely watched meeting between the Organization of Petroleum Exporting Countries and its allies including Russia on Sunday yielded no formal change in output policy, but delegates warned they may need “new strategies.” Saudi Arabia also unveiled a plan over the weekend to reduce its own shipments by about 500,000 barrels a day next month.

Oil chiefs from Venezuela and Oman indicated they may side with the kingdom on the issue of output cuts. Russian Energy Minister Alexander Novak was less supportive, saying Monday in a Bloomberg television interview that “we have to wait and see how the market is unfolding.”

“That reluctance yesterday and over the weekend by Russia to participate in coming together to cut 1 million barrels sent a negative signal to the market,” said John Kilduff, partner at Again Capital LLC. “On top of it all, there’s tremendous dollar strength happening right now and over the past few days.”

The Bloomberg Dollar Spot Index touched the highest since May 2017 early Tuesday, before slipping back.

The meeting in Abu Dhabi raised the odds of a production cut next month to “fairly high,” and the reduction may be in the 1 million-barrels-a-day range, according to RBC Capital Markets.

In the U.S., crude inventories stowed at the key pipeline nexus in Cushing, Oklahoma, rose by an estimated 2.5 million barrels last week, according to a forecast compiled by Bloomberg.

Other oil-market news:  Gasoline futures fell 5.7 percent to $1.5427 a gallon. There’s a risk the world is becoming too  reliant on the rapid growth of U.S. shale oil, according to the International Energy Agency’s latest World Energy Outlook. General Electric Co. is speeding plans to pare its stake in Baker Hughes with a  deal that would raise almost $4 billion at current prices. The shares of both companies climbed.