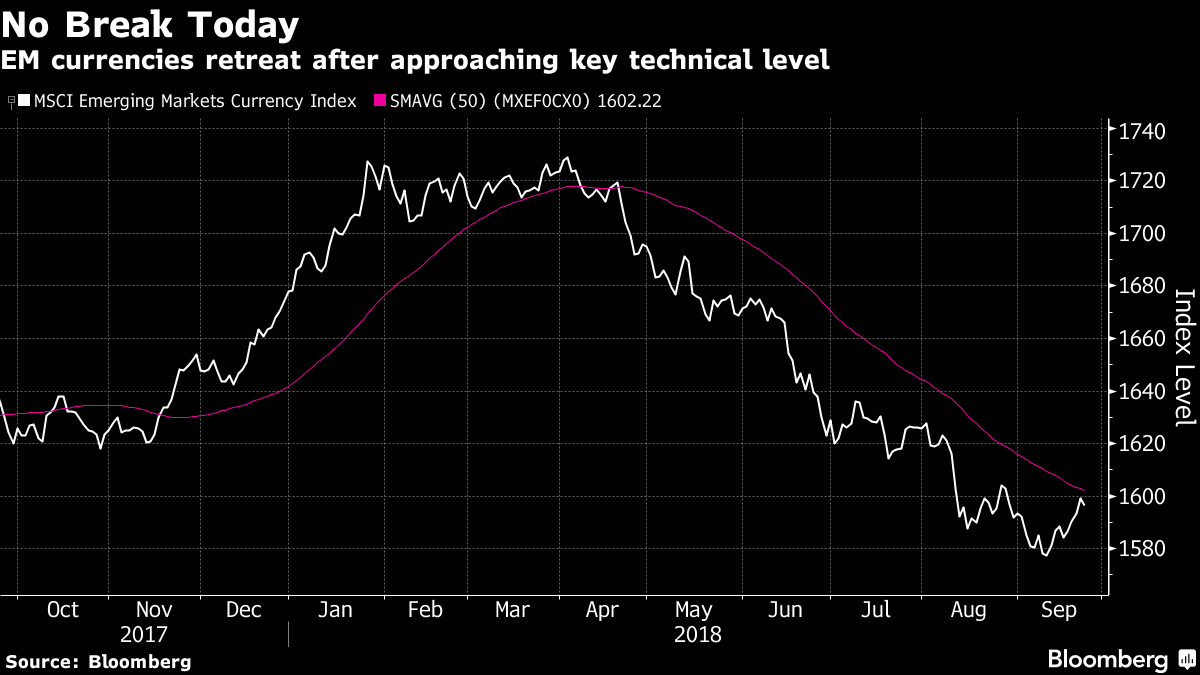 Mounting U.S.-China trade tensions and a shadow-banking imbroglio in India are keeping investors on edge Monday, just as emerging markets showed signs of recovering from seven months of turmoil.

Fresh from a week in which a gauge of developing-nation currencies had its best five-day stint since February as both stocks and bonds advanced, markets are now having to cope with the imposition of levies on another $200 billion in Chinese goods and the fallout of missed payments by Mumbai-based IL&FS Group.

Later in the week, traders will focus on interest-rate decisions in Indonesia and the Philippines and the tightening race in Brazil’s election. All this when the Federal Reserve’s Sept. 25-26 meeting will likely provide clues as to how quickly policy makers will push ahead with the removal of stimulus.

“Pressure on EM will remain, as the U.S.-China trade tensions continue to simmer in the background,” said Khoon Goh, the head of research at Australia and New Zealand Banking Group Ltd. in Singapore. “U.S. tariffs on Chinese imports have the potential to increase U.S. inflation and how the Fed reacts to this will be important.”

With the yield on 10-year Treasuries holding above 3.05 percent and Brent crude having surpassed $80 a barrel, “current-account deficit currencies” will remain vulnerable, Goh said.

MSCI Inc.’s gauge of developing-nation currencies climbed 0.7 percent last week, putting it close to breaking above its 50-day moving average. Apart from two days in April, the last time the index crossed that level — in November — it heralded a four-month rally that drove it to a record high.

The index retreated on Monday, along with a measure for equities, which pared the rising streak in about seven months.

China dashed prospects for a near-term resolution to the trade war with the U.S., warning President Donald Trump his threats of further tariffs are blocking any potential negotiations.

A 10 percent U.S. tariff on about $200 billion of Chinese goods takes effect from Monday, with the duties rising to 25 percent on Jan. 1 The risk of tariffs being raised to 25 percent from January, as announced by Washington, could still be negotiated away through concessions from Beijing over the next few months, according to NatWest Markets

Investors are concerned that defaults by IL&FS, which has total debt of $12.6 billion — 61 percent in the form of loans from banks and other financial institutions — could spread to other shadow banks in Asia’s third-largest economy.

Investors will monitor rate decisions by the Indonesian and Philippine central banks on Thursday to see if policy makers extend their hiking cycles.

Both countries run current-account deficits, making their currencies among the most vulnerable in Asia to the emerging-market sell-off Bank Indonesia has been the most hawkish Asian central bank this year, raising its policy rate by a total of 125 basis points since May.

It will probably lift it again this week. It’s also burned through about 11 percent of its foreign reserves since January to stem declines in the rupiah, which has lost more than 8 percent of its value against the dollar this year

The Philippines has struggled with inflation that accelerated to 6.4 percent year-on-year in August. Bangko Sentral ng Pilipinas has delivered 100 basis points of rate increases since May and more tightening looks likely after Governor Nestor Espenilla pledged “strong monetary action” at the Sept. 27 meeting.

The Czech Republic’s rate meeting on Wednesday is likely to result in an unprecedented third consecutive hike. Governor Jiri Rusnok joined an emerging consensus by saying he saw no reason to delay the move, meaning the focus after the meeting will be on any forward-looking comments

With an interest-rate increase from the Federal Reserve already priced in, investors will be seeking clues about the pace of hikes next year and beyond.

The central bank will announce updated economic and financial projections, including its first forecasts for 2021.

The dollar’s strength faltered in the last two weeks, boosting returns for carry-trade investors, who borrow where interest rates are low to buy higher-yielding assets.

A Bloomberg currency index that tracks carry-trade returns from eight emerging markets, funded by short positions in the dollar has risen about 3 percent since reaching a 2 1/2-year low on Sept. 4

Nigeria’s central bank announces its decision on interest rates on Tuesday in Abuja.

All analysts surveyed by Bloomberg forecast that policy makers will hold the key rate at a record high of 14 percent to bolster the naira and try to counter an acceleration in outflows in recent months amid the emerging-market selloff Central bankers in Ghana and Kenya are also likely to keep rates on hold.

Taiwan and Egypt decide on rates on Thursday, while Colombia is likely to hold its benchmark the following day

Two weeks ahead of the presidential election, investors will be focused on two new polls from Ibope expected on Monday and Wednesday.

Traders are trying to figure out who stands the best chance of making it to any runoff against right-wing lawmaker Jair Bolsonaro, the front runner. So far, Fernando Haddad, the Workers’ Party candidate, is in second, followed by leftist Ciro Gomes, a former Ceara state governor.

Markets have been reacting positively to any improvement in Bolsonaro’s chances and negatively to any gains for the leftist candidates, who are seen as opposed to an economic overhaul that would shore up the budget .

The minutes of last week’s meeting will be published Tuesday and the quarterly inflation report will come out Thursday. The short-end of the DI curve is pricing in more than 100 basis points in hikes this year

China will release data on industrial profits on Thursday and a private measure of manufacturing activity on Friday .

Taiwan reports on industrial production and unemployment on Tuesday Thailand will unveil trade figures and current-account data on Friday.

South African data on producer prices, payrolls, money supply, the trade balance and the monthly budget balance will give investors clues on whether the country is emerging from a first-half recession.

Starting Monday, Polish equities will have a 0.154 percent weighting in the FTSE Russell Developed All Cap Index, compared with their previous 1.33 percent share in its emerging-market group.

Poland presents its August unemployment rate on Tuesday, expected to stay at the lowest since 1990 at 5.9 percent. Moody’s holds its annual Poland & CEE Credit Risk conference in Warsaw on Thursday, followed by Poland’s announcement of its bond-supply plan for October and the whole of the fourth-quarter on Friday