Jeremy Siegel, professor of finance at the Wharton School and author of “Stocks for the Long Run,” says 5.5% is the “new normal” return for stocks after adjusting for inflation.

It incorporates a 2% dividend and 3.5% earnings per share, 2.5% of which is due to buybacks. The 5.5% real return is equivalent to a price-to-earnings ratio of 18, which is the current P/E for the S&P 500 based on future earnings (12 months forward).

“We’re at the new normal,” said Siegel, who spoke Friday at a conference sponsored by Wharton’s Jacobs Levy Center on the financial markets 10 years after the financial crisis. “Stocks are not underpriced or overpriced.”

But if recessions are built into the calculation, the 5.5% could drop to around 5% – 5.1%, said Siegel, who is working on building recessions into his calculations.

Siegel, who’s often considered a perennial market bull, says his current forecast for real rates of return is “very low,” reflecting two bear markets since 2000, slow population growth, slow economic growth and an aging investment class. “Real rates are low and likely to stay low for quite a while.”

He noted, however, that 5.5% real return and 18 P/E is not so low when considered within a historical context. Investors now benefit from a “zero cost for indexing.” Historically they had to pay commissions and operate in a market with wider bid/ask spreads, which together cost them about 1.5% per year.

Siegel prefers to use operating earnings in his forecasts instead of reported earnings by companies — “the most liberal” — and GAAP earnings, which require that assets and liabilities be valued at market rates (marked to market).

Stick With Quality Stocks as Market Gets Shaky: Strategists

Robert Shiller, the Nobel Memorial prize-winning economist and author of “Irrational Exuberance,” who shared the stage with Siegel, prefers reported earnings and noted that stock prices don’t always rise when earnings do.

The S&P 500 index, for example, didn’t rally along with earnings in 1916 just before the U.S. entered World War I or in 1982, when inflation was high and considered the main reason earnings were rising, but that’s not the case now. Earnings are rising along with stock prices, in part because of the corporate tax cut and because Donald Trump is president, said Shiller.

Trump’s presidency is not permanent and a trade war is brewing, said Shiller. “It’s likely to be a bad time for the stock market.” 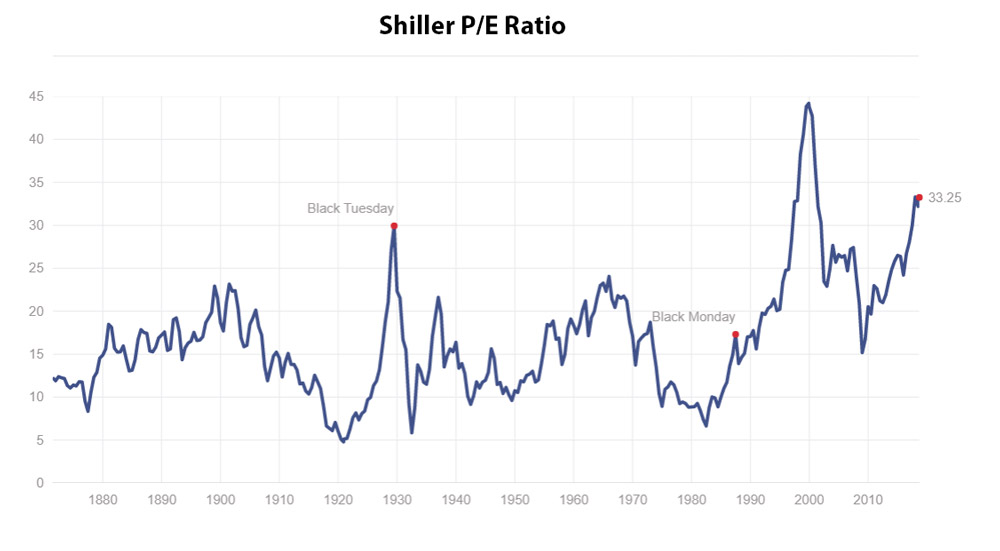 Shiller noted that the cyclically adjusted price-to-earnings ratio (CAPE), which he designed, is “by far the most consistent predictor of subsequent returns, short and long term.” A chart of the CAPE, which is based on average inflation-adjusted earnings from the previous 10 years to smooth out the data, showed that the ratio did indicate a highly overvalued S&P 500 around the time the Depression began and the dot-com bubble burst.

But, said Siegel, the CAPE Ratio has stayed above the mean for the last 30 years, suggesting that stock prices have been overvalued during recent bull markets, including the current one. “That looks strange to me.”

The current CAPE ratio is near 32.