Turkey’s market carnage rippled across emerging markets, sending both stocks and currencies toward their lowest levels in a year.

The lira led losses among global peers after the nation’s first steps to bolster the financial system were seen by some analysts as insufficient to protect markets in times of distress. As President Recep Tayyip Erdogan lashed out at the U.S., took higher rates off the table and said he wouldn’t accept an international bailout, traders pushed down Turkish assets in a selloff that spilled over to other developing economies.

The rand’s one-month implied volatility soared by the most since December 2015, while the yield on Argentine’s century bonds rose to 10 percent as the peso sank to 30 per dollar.

“It’s another Manic Monday,” said Jordan Rochester, a currency strategist at Nomura International in London. “We go through the list of options they have to stop this: it involves rate hikes, getting the IMF involved and restoring market confidence in the lira. Unfortunately, all the components are going the other way.”

Fear that the Turkish meltdown will keep punishing emerging markets resurfaced Monday as traders also grappled with tensions between the U.S. and major economies such as Russia and China. Still, many analysts say there are few fundamental reasons to add the whole space to the same basket as several countries have done their homework. That means: while the stress in Turkey may continue, its correlation to the rest of the asset class may decline soon.

“EM has already seen a large selloff between April to July and negative developments in Turkey will eventually be seen (along with Argentina) as isolated given their exceptional external imbalances compared to most EM countries,” JPMorgan analysts including Luis Oganes and Jonny Goulden wrote in note to clients.

Turkey’s market turmoil didn’t just erase a July rebound in emerging-market stocks — it also made them the cheapest since early 2016, before a two-year, 60 percent rally. At 10.8, the MSCI Emerging Markets Index’s 12-month blended forward price-to-estimated earnings ratio is now also below where it was after a sell-off in the second quarter. The gauge itself fell 2 percent this month, extending its yearly decline to about 10 percent. 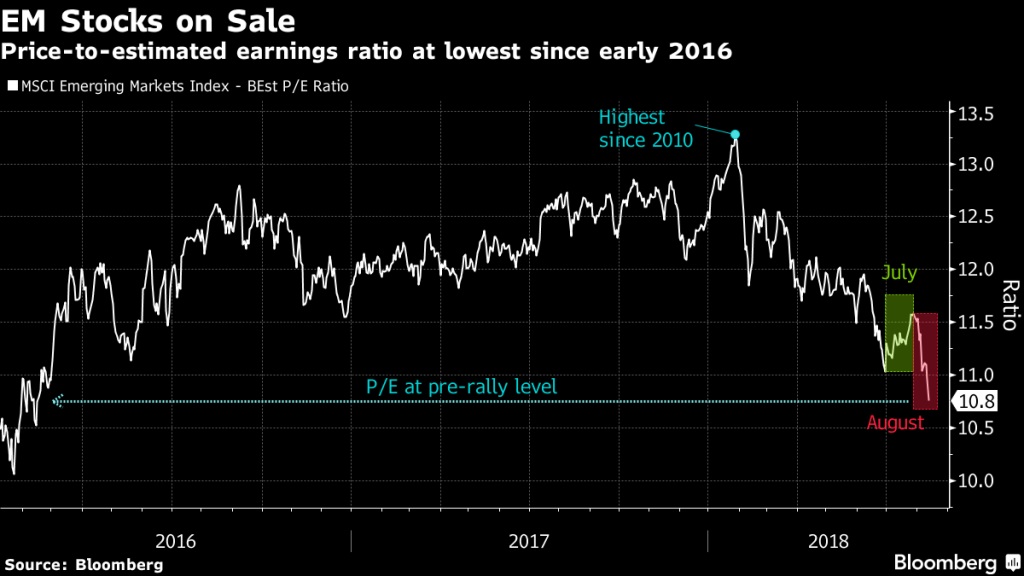 While some analysts say they are happy to nibble at stocks, they aren’t really diving in. Equities in developing markets will likely remain turbulent with little sign of stability to lure bargain hunters despite Monday’s selloff, according to UBS Asset Management.

“We see building value, but you have no visibility on when that value can be realized,” said Geoffrey Wong, head of global emerging markets and Asia Pacific equities at UBS Asset. Investors can be forgiven for feeling wary, “given that we’ve got a 1-2-3-4-5-6 punch, not just a 1-2 punch.”

Here’s what other analysts and investors are saying:

Nigel Rendell, analyst at Medley Global Advisors LLC in London: “Certainly there is some knock on impact through association, by being merely EM, but Turkey has some very unique problems. It’s hard to find another EM with such deep-rooted issues that policymakers are refusing to counteract with conventional monetary policy. … There has been some panic offloading of positions in some of these other markets, which could provide cheap re-entry points.”

Paul McNamara, a London-based fund manager at GAM UK Ltd., said in a Bloomberg Television interview: “It can be contained to just Turkey because there aren’t really any other emerging markets that have exactly the same toxic blend that Turkey has….Only Argentina really has the external deficit, and they don’t have as much domestic debt.”

Jan Dehn, head of research at Ashmore in London: “While the plunge in Turkish assets has led to cries of contagion, the ensuing volatility is “replete with opportunity.” This contagion “has not happened in EM for twenty years, nor, in our opinion, will it ever re-appear.” EM fundamentals much more resilient to external headwinds today. Recommends buying weakness in non-Turkey EM assets.

Esther Reichelt, strategist at Commerzbank in Frankfurt: On potential downside for EM currencies: “It depends on whether the central banks are likely to show a clear sign that they are going to take stabilizing measures. That’s very likely for Russia and the rand, less likely for the Indian rupee. … The dollar is up due to safe haven demand. Right now, it seems like the main stress has calmed down and it doesn’t seem like there is contagion in EM currencies, which would also imply that the risk-off sentiment is going to fade.”