Say goodbye to the Fed you once knew

In the panic of 1907, a son of Italian immigrants turned American bank executive highlighted a truism of global finance. Having stockpiled liquid assets ahead of potential financial turmoil, Amadeo Giannini stemmed a run on his bank by displaying his bulked-up gold reserves to a nervous public, offering to convert customers’ deposits into the precious metal at a time when other banks were refusing to do the same.

It was a move that insulated Bank of Italy, later to be renamed Bank of America Corp., from much market mayhem at the time and demonstrated the importance of maintaining liquid buffers in the financial system—an importance that was arguably forgotten in the runup to the recent financial crisis. In the years before 2008, reserves held at large U.K. banks had drifted from around 30 percent of their total assets to a mere 1 percent, for instance.

Seven years after the crisis, reserves and high-quality assets required to be held by banks to cover potential funding outflows are still being built up through the introduction of new financial regulation, with far reaching consequences. A new paper by Zoltan Pozsar, director of U.S. economics at Credit Suisse AG, underscores the complex interplay between new banking regulation and the role of the Federal Reserve in financial markets, arguing that the existence of these new liquidity requirements may force the U.S. central bank to revamp itself into a new global funding force.

Indeed, the Fed’s bloated balance sheet may prove to be its permanent state rather than a temporary phenomenon in the aftermath of years of stimulative monetary policy, he says.

In the wake of the financial crisis, the Fed’s monetary policy toolbox evolved to provide additional stimulus to an economy reeling from negative shocks. New measures—namely, asset purchases known as quantitative easing—were used to support the economy. Novel steps have also been taken to begin to withdraw this accommodation.

Due to the magnitude of the excess reserves in the banking system—a legacy of the Fed’s large-scale asset purchases—traditional open-market operations to adjust the so-called federal funds rate (FF) were viewed as insufficient. As such, the central bank has made use of overnight reverse repurchase agreements, a tool dubbed the Death Star, to further drain liquidity from the financial system.

“Big is not odd; small was odd,” Pozsar writes. “Instead of asking when the Fed will shrink its balance sheet, it’s about time the market gets used to the idea that we are witnessing a structural shift in the amount of reserves the U.S. banks will be required to hold, where reserves replace bonds as the primary source of banks’ liquidity. And that this shift will underwrite demand for a large Fed balance sheet.”

In some respects, a big central bank balance sheet may represent a return to normality. Had regulators asked banks to hold an extra $50 billion in reserves every year from 1971 onwards to coincide with the explosion in wholesale (repo) funding markets, Pozsar says, the Fed’s balance sheet would look roughly like it does now. 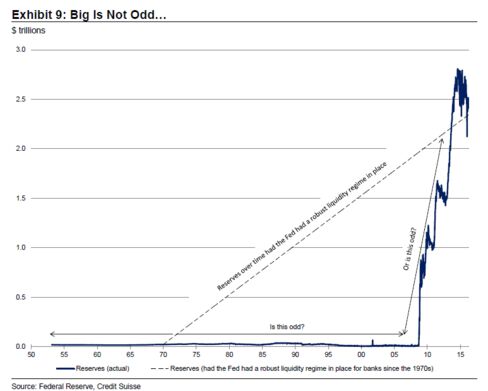 Powell Says Rates to Be Raised ‘Purposefully’ to Curb Inflation

Instead, banks were allowed to vastly increase their exposure to wholesale funding without a coinciding increase in reserves to help insulate them from the vagaries of short-term financing.

New regulations requiring financial institutions to hold bank reserves—in the form of money and other high-quality assets—are aimed at correcting this. Such reserve requirements, however, in the form of the liquidity coverage ratio (LCR) and high-quality liquid assets (HQLA) rule will likely diminish the importance of the fed funds market, where banks have historically borrowed to meet their excess reserve requirements.

In doing so, it will also affect the way the Fed controls benchmark interest rates, forcing the central bank to move away from the fed funds rate and instead focus on the overnight bank funding rate (OBFR).

“One unintended consequence of the LCR is that the federal funds market will slowly fade into irrelevance,” Pozsar writes. “Excess reserves are not sloshing but rather sitting at the Fed. They sit passive and inert because banks must hold these reserves as HQLA to meet LCR requirements.”

Such a development would reinforce an already existent trend that has seen the fed funds market drop from $250 billion in 2007 to a mere $60 billion today, dominated by trades between Federal Home Loan Banks (FHLBs) and a handful of other, mostly non-U.S., financial institutions.


“We think the Fed will soon have to begin a conversation with market participants about the problems of the FF market, the fading relevance of the FF rate as a reliable measure of banks’ funding costs and the need to switch to another, more meaningful policy target,” Pozsar notes. “The overnight bank funding rate is the obvious candidate and we think the switchover will happen before year-end.” 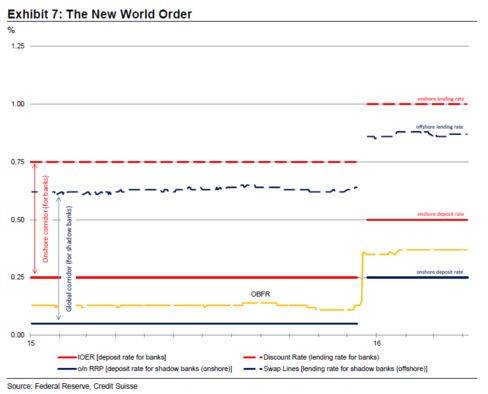 That move would see the U.S. central bank aiming ”to target the price of dollar funding not only onshore but also globally,” in effect becoming a cross-currency swap lender of last resort for the entire world. That, conversely, would force the Fed to be even more mindful of global financial conditions as it tweaks U.S. monetary policy.

“If the world is depending on dollars and the dollar is the funding currency not only in the U.S. but globally, then you must be extra careful in how you tighten global policies so as not to create dollar funding stress,” Pozsar said in an phone interview. “If you make an error it’s coming back to your own balance sheet. That’s going to make the Fed more careful and more dovish going forward.”

Powell Says Rates to Be Raised ‘Purposefully’ to Curb Inflation