New COVID-19 Data for All 50 States, and the District of Columbia 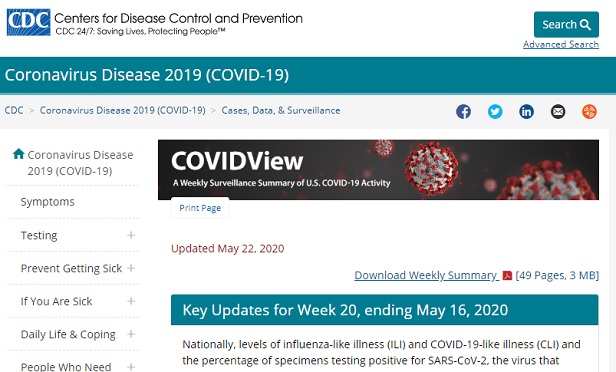 The new weekly CDC 'flu-like illness' activity map suggests that the country still has COVI9-19 flames to put out. Here are 5 images that tell the story, based on CDC data... In late March, the CDC colored many U.S. states red, meaning that those states had a very high rate of outpatient activity for COVID-19, flu, pneumonia and other COVID-19 look-alike illnesses. 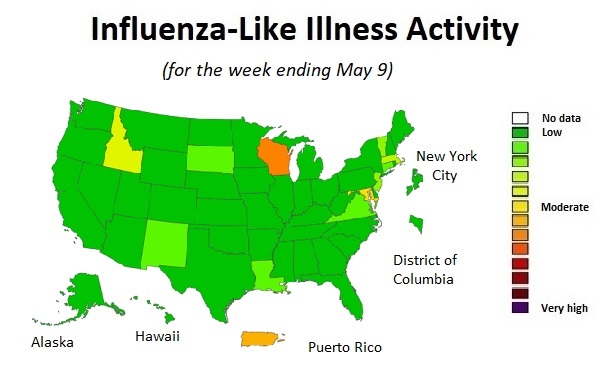 By the end of the week before last, most states had cleared to the healthiest, dark green level, or at least to a light green, minimal activity level. This map, for the week ending May 16, shows that most states are a nice, healthy green... but not Idaho and Wisconsin. 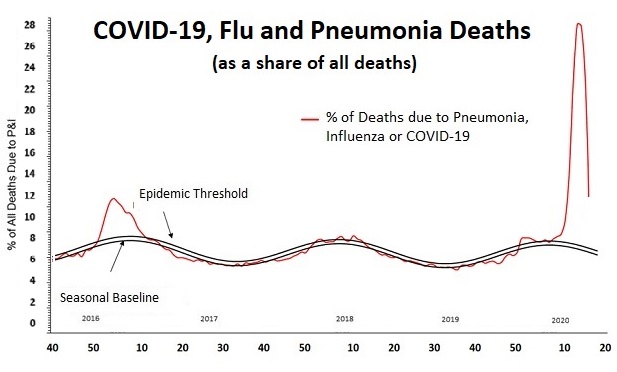 4. COVID-19 and COVID-19-Look-Alike Deaths as a Percentage of All Deaths

This outbreak intensity indicator is lower than it was in April, but it's still well above the CDC's epidemic threshold. 5. The More Death Numbers the CDC Gets, the Deadlier the COVID-19 Outbreak Looks

One key outbreak intensity indicator is the percentage of all deaths caused by COVID-19 and COVID-19 look-alikes. For one particular week in April, for example, this indicator is now 27%, up from 18.6% when it was first announced.

The number of patients showing up at U.S. doctors’ offices with illnesses that look like COVID-19 is falling, but the outbreak is still killing people at epidemic levels.

For the U.S. Centers for Disease Control and Prevention (CDC), one sign that a disease outbreak may be an epidemic is if the disease accounts for more than about 6% of all U.S. deaths in a given week.

Early U.S. death counts for the week ending May 16 show that COVID-19, and illnesses that often resemble COVID-19, caused about 13%  of the deaths reported to the CDC.

That outbreak mortality intensity indicator was over 6% in 21 states.

In recent days, some analysts have suggested that COVID-19 may be hitting harder in high-population states led by Democrats than in more spread out states led by Republicans, but five of the states that rank in the top 10 in terms of outbreak mortality intensity — Iowa, Mississippi, New Hampshire, Maryland and Massachusetts — have Republican governors.

A team at the National Center for Health Statistics, an arm of the CDC, has reported COVID-19 outbreak tracking data in the CDC’s latest COVIDView report.

The report was released Friday — May 22 — and covers deaths and other events that happened during the week ending May 16.

The COVIDView team is also wrestling with weaknesses in COVID-19 diagnostic testing efforts.

The COVIDView reports are similar to the CDC’s weekly influenza tracking reports. To get around flu testing gaps, the CDC reports data on confirmed cases of COVID-19 alongside data on similar conditions, such as pneumonia, flu and flu-like illnesses. The CDC also reports total death counts, in addition data on deaths officially attributed to COVID-19, flu and pneumonia.

The COVIDView numbers for May 2 are the latest numbers that appear to be reasonably complete.

The CDC keeps updating its numbers as new data comes in, and some key indicators can change dramatically over the course of a month.

On April 24, for example, the CDC published its first version of the COVID-19 mortality intensity figure for the week ending April 18: The CDC reported that 18.6% of all people who died that week had died from COVID-19 or similar-looking conditions.

States that were slower to send in their data had higher COVID-19 mortality intensity than the early filers. The CDC has revised the indicator almost every week. In the latest report, the CDC  says 27% of all of the people died during the week ending April 18 died of COVID-19 or similarly conditions.

For the ending April 11, the COVIDView mortality intensity indicator has increased from 18.8%, in the April 17 report, to 26.4%, in the report that came out Friday.

— Read 7 Things the Senate Is Hearing About Covid-19, for Agents, on ThinkAdvisor.

COVID-19 mortality increased. One question is whether that will matter to earnings.

Terms were not disclosed for purchase of Crowe and Associates.