Mutual fund and ETF flows turned positive in April, reversing a historic decline in March, which saw the biggest decline since at least 1993, according to Morningstar. Investors, however, remained skittish in April, favoring money market funds above all others, as they did in March, and withdrawing funds from stock funds.

U.S. equity funds saw outflows of $18.1 billion compared with net inflows of $10.5 billion in March. About two-thirds of April outflows were from the Vanguard Total Stock Market Index (VTSAX).

In another reversal, taxable bond funds saw net inflows of $36.6 billion in April, versus outflows of $240.3 billion in March. 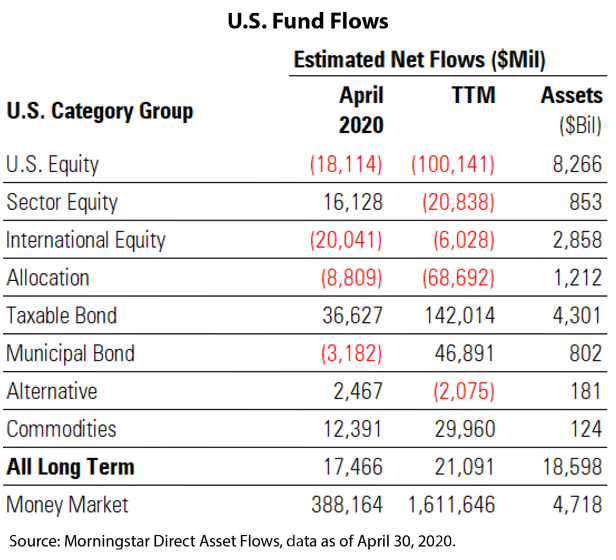 High-yield bond funds led the bond fund category for net inflows, collecting $10.7 billion, the most in more than 21 years of data, as “investors’ interest in risk-taking appeared to revive,” according to Morningstar.

International equity funds, however, suffered the biggest withdrawals among all fund categories — $20 billion, close to 60% more than the previous month.

Sector equity funds, in contrast, experienced near-record inflows of $16 billion, led by health care funds, which accounted for about half those inflows, followed by technology funds.

Even energy equity funds saw net inflows, of about $2 billion, led by $3 billion moving into the United States Oil Fund USO. Investors poured money into the ETF in March and April, betting that oil prices would rebound from recent lows, which pushed the ETF to the maximum allowed new share creation. That investment ultimately backfired when oil prices plummeted in late April, due in large part to negative prices in the futures contract that the ETF tracks.

Commodity funds overall had the third biggest net inflows among fund categories in April, after taxable bond and sector equity funds, collecting a net $12.4 billion, about three times the size of inflows in March. One fund, SPDR Gold Shares ETF (GLD), accounted for over 40% of those flows.

Passive funds experienced larger flows than actively managed funds in almost all categories, whether more money was coming into those funds or leaving them. There were a few exceptions, however. 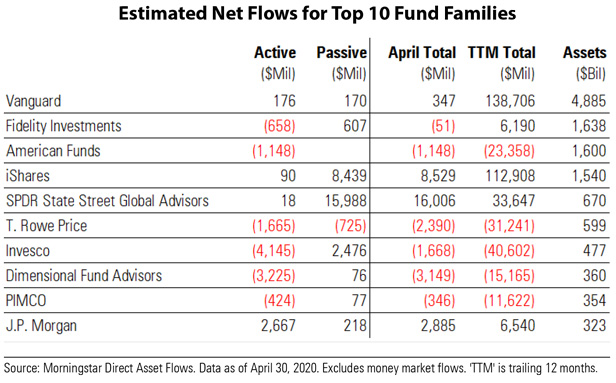 — Check out Interactive Brokers Rolls Out ‘No Load’ Fund Shop on ThinkAdvisor.