Money market funds are poised to be the big winner in fund flows for the year.

For the past 12 months through Nov. 30, they attracted $539.1 billion in net new flows, far more than the net $414.4 billion that flowed into taxable and municipal bond funds. Equity funds, in contrast, saw net outflows of $88.8 billion, according to Morningstar. (Asset allocation funds, which mix stocks and bonds, had net outflows of $49.3 billion).

“This remains by far the best year for money market inflows since the financial crisis,” according to the Morningstar report, which noted that their year-to-date inflows totaled $483.5 billion.

Investors appear squeamish about owning stock funds rather than money market and bond funds despite the equity rally that has sent the S&P 500 27% higher year to date, setting new record highs on an almost weekly basis recently.

Beyond the headline numbers for equity funds, however, are several developments that offset some of the bearishness. Most passive equity funds saw net inflows for the one-year period, totaling $255 billion, compared with $313.6 billion of outflows in actively managed stock funds.  (Only passive sector equity funds experienced outflows, equal to a little more than $10 billion.)

9 Steps to Prepare Your Clients for Possible Job Loss

How Many Stocks Do You Need for a Diversified Portfolio? 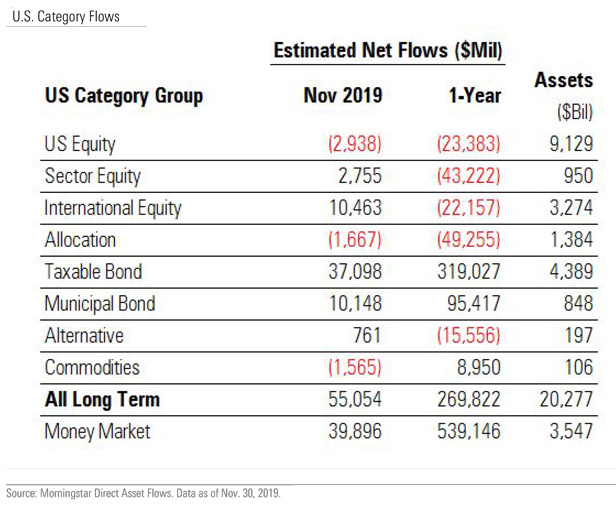 While most categories of equity funds saw net outflows from active funds and inflows into passive (with the exception of sector equity funds which saw outflows from both), bond funds experienced inflows into both categories. Passive funds led inflows for taxable bond funds: $203.9 billion vs. $115.1 billion in active funds, while the actively managed funds led inflows for muni funds: $65.7 billion versus $9.8 billion. 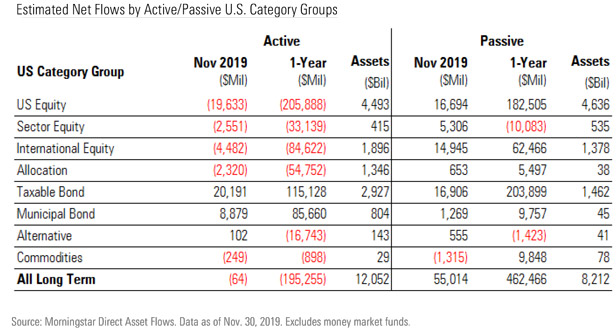 Among fund families, Vanguard continued to lead the race for inflows, taking in a net $173.6 billion for the year ended Nov. 30, compared with $136.1 billion for BlackRock/iShares and $60.1 billion for Fidelity Investments. JPMorgan placed fourth, with inflows of $12 billion, followed by State Street Global Advisors, with $9.5 billion.