Financial advisors expecting managed funds to outperform passive index funds during the next market downturn will be disappointed by the latest S&P Indices Versus Active (SPIVA) report published by S&P Dow Jones Indices.

The report focuses on “whether actively managed funds are better at risk management than passive indices,” which is an argument that many active asset managers and even advisors make. On the flip side, their “critiques of passive investing often argue that indices are not risk-managed, unlike active management,” according to the report.

It found that with few exceptions actively managed funds generally underperformed their index benchmarks even though they typically had higher risk than their benchmarks.

“All else being equal, higher risk taken by a manager should be compensated by higher returns,”  the report said. But that’s not what it found.

Rather, “after adjusting for risk, the majority of actively managed domestic funds in all categories underperformed their benchmarks, on a net-of-fees basis, over mid- and long-term investment horizons …. The majority of international equity funds also generated lower risk-adjustment returns, when using net-of-fees returns.” 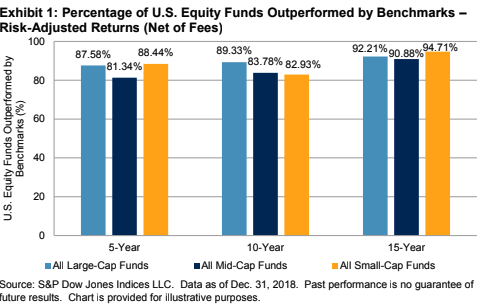 The report looked at the performance of funds over five, 10 and 15 years before and after fees in relation to the benchmarks that reflected managers’ investment styles. Large-cap value funds, for example, were compared to the S&P 500 Value index, rather than the S&P 500 index.

Risk was defined by using the standard deviation of monthly returns over a certain period, then annualized by multiplying the square root of 12 and Sharpe ratios of funds to represent risk-adjusted returns, and Sharpe ratios were used to measure the risk/return ratios of funds. The report included gross-of fees performance figures because “indices do not incur costs,” as well as net-of-fees performance.

Actively managed international and global funds including emerging market funds also performed slightly better than U.S. equity funds, underperforming their benchmarks, roughly 66% to 93% of the time during those three periods net of fees.

Actively managed bond funds performed even better on a risk-adjusted basis than equity funds but mostly before fees. After fees, only two categories of bond funds saw majorities beating their benchmarks over five and 10 years: investment-grade long funds and loan participation funds. The majorities of two other categories of bond funds — government long funds and California muni debt funds — beat their benchmarks over a 10-year period. Fees play a big role in the underperformance of bond funds, according to the report.

The report concludes: “We did not see evidence that actively managed funds were better risk-managed than passive indices.”