Bond Giants Bet $100 Billion on Growth. It Hasn’t Paid Off

By Natasha Doff and Cecile Gutscher

The luminaries of high finance have staked more than $100 billion in one of the boldest bond bets of the post-crisis era: That a global economy firing on all cylinders would spur government yields in the West and boost emerging-market credits.

The wager comes in the form of bond funds that have a negative average duration, meaning they are heavily positioned for rising interest rates. But the trades are struggling. A perfect storm — including muted core inflation increases and relentless haven flows — has kept a lid on longer-dated developed-market yields. Trade tensions and a stronger dollar have killed the emerging-market rally, bucking consensus on Wall Street.

That’s all left portfolio managers like Jack McIntyre with a big question: what will it take for the strategy to come good?

“Trade tensions have hurt our European growth thesis,” argued McIntyre, who oversees $58 billion of fixed-income assets at Brandywine Global Investment Management. “We need clarity on how trade is going to unfold for our short European duration positions to outperform again.”

It’s not just about the tensions in global commerce, however. A combination of the protectionist threat, European political risks, muted price increases and policy maker success — the Fed has so far navigated a smooth exit from stimulus and increased rates without spooking the market — have all helped ensure that term premiums remain contained.

That’s bad news for the more than $100 billion of bond funds which have a negative average duration, according to data compiled Morningstar Inc. As of the end of the first quarter, about 80 percent of that money is in funds managed by Franklin Templeton Investments, the data show.

Franklin Templeton’s bond chief, Michael Hasenstab, has been waiting since at least 2016 for his wager — that U.S. rates would return to a pre-crisis normal of sorts thanks to an economic upswing and diminishing monetary stimulus — to come good. He extended the bet earlier this year, primarily using interest rate swaps to push average duration down to a record low of -0.85 years as of the end of March.

In a May interview with Bloomberg TV, Hasenstab predicted rising inflationary pressures, an onslaught of U.S. bond supply and the Federal Reserve’s moves to pare its balance sheet would conspire to drive up the U.S. 10-year yield to as high as 4 percent.

The yield rebounded from an earlier retreat on Wednesday after the Trump administration released the biggest list yet of Chinese goods it may hit with tariff increases. It was trading little changed at about 2.86 percent.

A representative of the fund declined to comment further.

Bill Gross’s Janus Henderson Global Unconstrained Bond Fund has been battered this year betting that German bund yields will catch up with Treasuries. Instead they are the farthest apart in almost three decades, with bunds anchored by rising political risks and a downward reassessment of European Central Bank rate hike expectations.

A spokeswoman for the fund didn’t respond to e-mailed requests for comment.

“Getting duration calls right consistently is difficult in the fixed income world,” said Ashis Dash, who researches fixed-income funds as an associate director at Morningstar. “One has to time it well to make money out of it.”

Goldman Sachs AM’s $4 billion Strategic Income Fund has underperformed all peers in the past month, according to Bloomberg data, despite marketing itself as a portfolio that can “potentially gain in any rate environment.” While the fund’s short positions on U.S. rates was a plus for performance in May, it was pulled down by its exposure to emerging-market bonds. 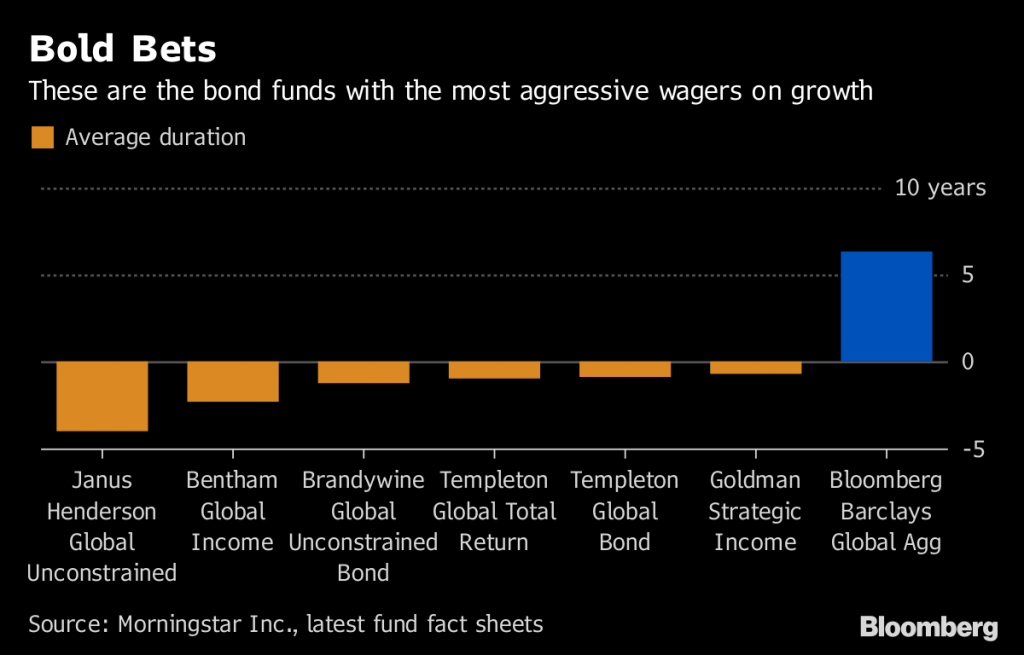 Iain Lindsay, the firm’s co-head of fixed-income portfolio management, said competing pressures from robust U.S. growth on one hand and trade tensions on the other underscore the need for a “dynamic approach” to duration management.

The buyside is hardly alone in having been caught out by the shifting narrative on growth and risks — many Wall Street strategists have been dialing back their forecasts. Analysts at JPMorgan Chase & Co. admitted in a recent research note that they have been too bullish on corporate and emerging-market debt.

It’s not game over for the funds that have staked money on the big growth bet. There’s still plenty of scope for a reversion in markets back to the position they were in at the beginning of the year, while the seeds have been planted for a durable resurgence in trend inflation in the U.S. and Europe. The IMF projects the global economy will grow 3.9 percent this year and next, the fastest pace since 2011.

All the same, one estimate of the term premium, the extra compensation to hold longer-maturity U.S. bonds over short-term securities, remains in negative territory.

“It’s hard to imagine that some of these big positional bets are really going to pay off if yields don’t end higher than where they peaked this year,” said Ian Lyngen, head of U.S. rates strategy at BMO Capital Markets Corp.