The Treasury yield curve from 5 to 30 years flattened Thursday to the lowest level since August 2007, as a combination of weaker-than-expected U.S. inflation and solid demand for a record bond auction bolstered investor confidence in owning long-dated securities.

The spread narrowed by more than 4 basis points, the most since February, dropping through a previous intraday low from April to 27.7 basis points. The gap between 2- and 10-year Treasuries also shrank in a bull flattening move.

U.S. inflation took a breather in April from its acceleration in recent months, with the core consumer price index up by a weaker-than-anticipated 0.1 percent from March and just 2.1 percent on an annual basis. Perhaps in part because of the data, the Treasury saw good demand for its $17 billion auction of 30-year bonds, the largest-ever sale of the maturity.

“Bull flattening of the yield curve signals that inflation is not a problem,” Scott Minerd, chief investment officer at Guggenheim Partners, said Thursday on Twitter. “But that won’t stop the Fed from staying on course for three more rate hikes this year.”

Don't Expect Active Funds to Outperform in a Bear Market

El-Erian, Crescenzi Explain Why Investors Are Betting on the Fed

Though the flattening has been relentless, it may still have room to go. BMO Capital Markets strategists said in a report Thursday that a closing level below 30 basis points signals “a clear path” for the yield curve from 5 to 30 years to fall to 20-25 basis points.

Investors and Federal Reserve officials alike have been on guard for the curve flattening toward inversion, which has historically preceded recessions. Yet bond traders are still pricing in more than two additional quarter-point rate hikes by year-end, betting policy makers will stick to their tightening path.

Thirty-year yields fell about 5 basis points Thursday, a steeper drop than any other maturity, to about 3.11 percent. It’s the maturity’s biggest rally in about a month. 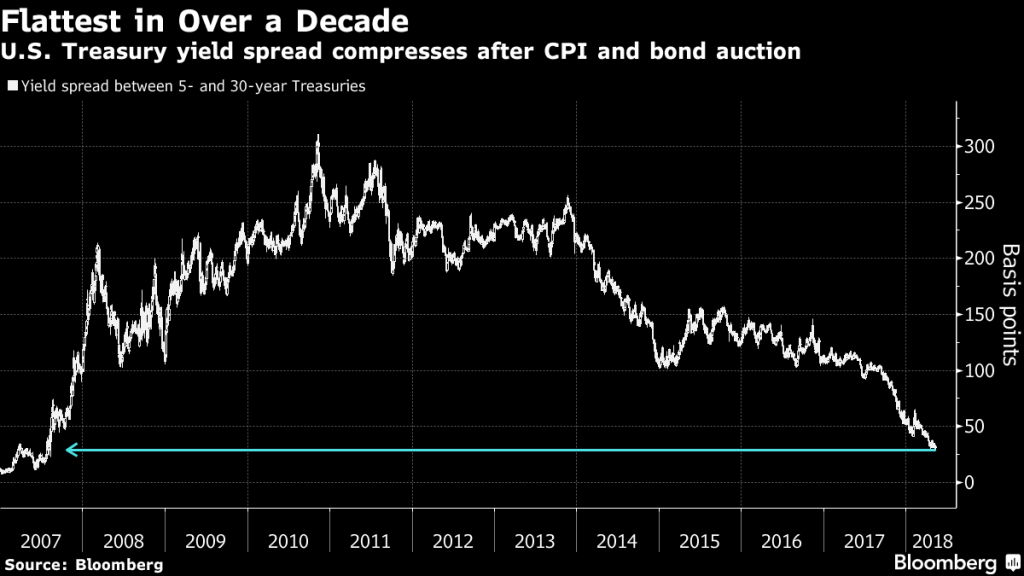 Don't Expect Active Funds to Outperform in a Bear Market

El-Erian, Crescenzi Explain Why Investors Are Betting on the Fed