Vanguard remains the No. 1 fund company in the U.S. by assets, but its net new flows in April were slower than BlackRock’s iShares, and its one-year flow rate was less than half that of iShares.

According to Morningstar’s April fund flow report, Vanguard took in a net $12.33 billion in April versus iShares’ $16.99 billion, and its one-year net flows grew at a 7.4% rate compared with iShares’ 15.1%.

“It was an anomaly that Vanguard had been growing as quickly as it did, given its size,” says Kevin McDevitt, Morningstar senior analyst. “To some extent you would have expected its growth to slow.”

Vanguard Faces Pushback From Other Firms

Vanguard, known for its low expense ratios, is also facing more competition on price from other fund companies. BlackRock’s iShares and Fidelity, for example, can charge next to nothing for some funds or ETFs and make up those loss leaders with charges for other funds or services. Vanguard, as a mutual company, cannot do the same. It must cover its costs, explains McDevitt.

Despite the latest data, Vanguard ended the first four months of the year with more than twice the assets of its closest competitors — $4.36 trillion compared with $1.55 trillion held by American Funds — and its Total Stock Market Index Fund led in asset flows for April, at $4.38 billion. 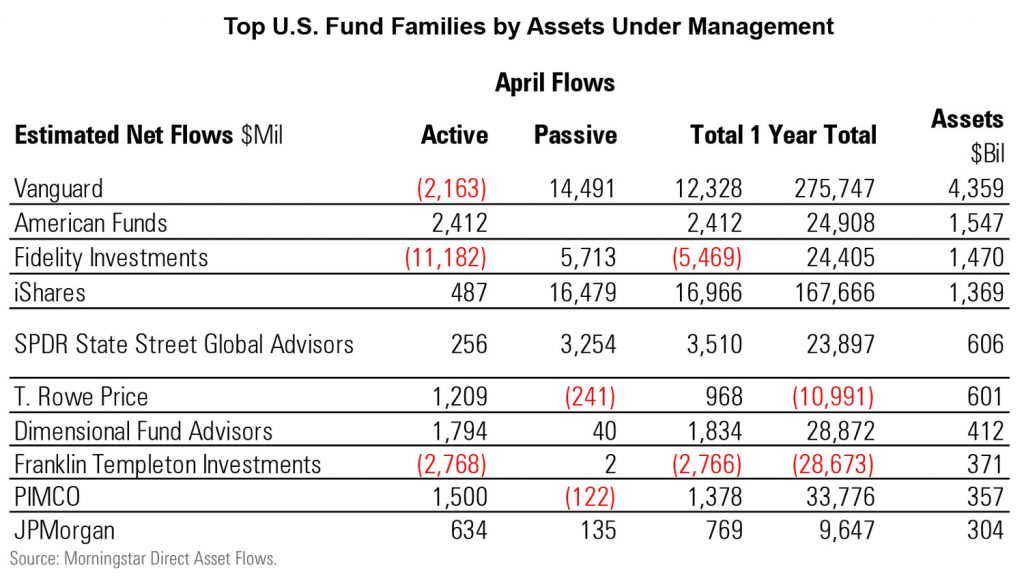 But ultra-short bond funds had even bigger net inflows, $5.6 billion, indicating perhaps that investors are aware that short-term bonds are a better investment during periods of rising rates since they lose less principal and turn over much more quickly allowing investors to reinvest funds in higher paying bonds.

Among fund companies, Fidelity Investments suffered the biggest net outflows in April — $5.47 billion — followed by Franklin Templeton Investments, which lost a net $2.77 billion. Franklin Templeton and T. Rowe Price were the only U.S. fund companies among the top ten to suffer net outflows for a full year. Both are predominantly active fund managers.

— Check out How to Take a Passive Approach to Sustainable Investing on ThinkAdvisor.

Life Settlements Made a $654 Million Difference