U.S. stocks rallied and global equities halted a six-day losing streak as selloffs in credit markets and crude abated. Treasuries fell, while the dollar gained with the odds for a Fed rate hike Wednesday above 75 percent.

The Standard & Poor’s 500 Index headed for its first back-to-back gains since Nov. 3, and European equities rallied the most in 10 weeks as the cost of insuring corporate debt ended a five-day surge and U.S. crude futures climbed past $37 a barrel. The yield on the two-year Treasury note approached a five-year high. The dollar rose for a fifth day. 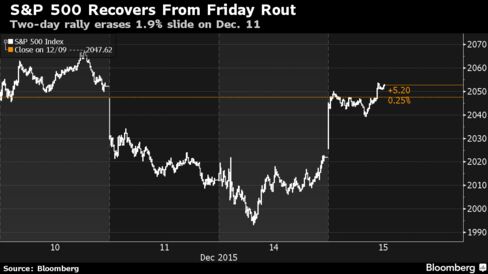 Tension eased on global financial markets a day before the Fed is expected to raise rates and assure investors that any subsequent hikes will be gradual as long as economic growth remains steady. The first gains in four days for junk bonds and crude’s rebound from a six-year low helped quell concern that a selloff in riskier assets would derail global growth just as the Fed tightens.

“The Fed will be comfortable with a rate hike tomorrow,” said Brian Jacobsen, who helps oversee $242 billion as the chief portfolio strategist at Wells Fargo Advantage Funds in Menomonee Falls, Wisconsin. “I don’t think they want to show they’re beholden to the whims and fancies of traders, so they’ll probably still plow ahead with the plan to hike. But they’ll certainly want to convincingly signal that they’re going to follow a very shallow path in future rate hikes.”

The S&P 500 added 1.4 percent at 2:15 p.m. in New York, adding to a 0.5 percent advance Monday that erased a 1.9 percent rout on Friday. Data today reinforced expectations for a gradual increase in rates, with the cost of living holding steady in November, underscoring scant inflation that is well below the Fed’s goal.

Tuesday’s rally cut the S&P 500’s slide in December to 1.4 percent. While the month historically has been one of the best of the year, the index is headed for its worst December in 13 years and the biggest annual drop since 2008.

The probability the Fed will increase its benchmark rate on Wednesday is 76 percent, according to futures data compiled by Bloomberg. Traders are pricing in less than three increases of 0.25 percentage point in the next year, taking the fed funds effective rate to 0.76 percent from 0.14 percent.

The Stoxx Europe 600 jumped 2.9 percent from a 10-week low. Germany’s DAX Index and France’s CAC 40 were among the biggest gainers, rising at least 3.1 percent. The Stoxx 600 is still down 6.7 percent this month, on course for its worst December since 2002 amid a rout in commodities, concern about U.S. monetary policy tightening and disappointment over the extent of European stimulus.

Treasuries fell, pushing 10-year yields to the highest in more than a week, as demand for fixed income around the globe slumped after stocks and oil prices rebounded. The rate on the policy-sensitive two-year note added two basis points to 0.96 percent.

As the Fed moves closer to raising rates, Treasury yields are showing inflation expectations among investors are approaching a six-year low. The difference between yields on 10-year notes and similar-maturity Treasury Inflation Protected Securities has narrowed to 1.51 percentage points from 1.55 percentage points a month ago.

The risk premium on the Markit CDX North American High Yield Index, a credit-default swaps benchmark tied to the debt of 100 speculative-grade companies, narrowed the most since October after touching a three-year high on Monday.

The cost of insuring corporate debt in Europe declined after jumping the most in more than two months on Monday amid concerns sparked by funds suspending redemptions. The Markit iTraxx Europe Index of credit-default swaps on investment-grade companies fell one basis point to 82 basis points. 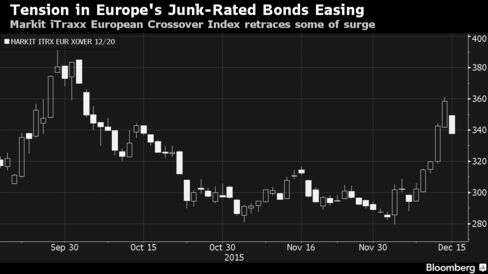 Oil advanced after slumping to the lowest since February 2009. West Texas Intermediate crude rose 3.2 percent to $37.50 a barrel, after sinking as low as $34.53 last session, its weakest level in more than six years. Brent crude climbed 1.7 percent to $38.57, set to end the longest run of losses in more than a year.

U.S. natural gas extended its losses, dropping to the lowest in 14-years as forecasts showed above-average temperatures were set to persist this month.

Gold gained from a one-week low as the dollar weakened before the Federal Reserve decides whether to raise interest rates. Platinum and palladium advanced after European car sales rose.

The dollar rose versus the euro and yen as bond yields climbed before the Fed’s interest-rate decision. Traders are looking past the first increase and contemplating a landscape of relatively low borrowing costs for years to come. A gauge of the dollar has surged 8 percent in the past year in anticipation of the Fed raising rates in contrast with counterparts in Europe and Japan who are carrying out unprecedented stimulus.

The MSCI Emerging Markets Index rebounded from a six-year low, rising for the first time in 10 days. Currencies gained as oil ended its slump and speculation grew the dollar’s gains this year leave it vulnerable to a short-term selloff if the Federal Reserve raises interest rates.

The stock gauge has slumped 18 percent this year, poised for its worst annual drop since 2011, compared with a 4.3 percent decline in MSCI World Index of developed countries. Equity benchmarks in Russia, Turkey and Thailand climbed more than 1.8 percent on Tuesday.