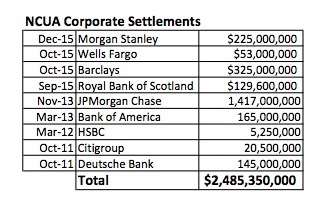 “(The) NCUA continues to pursue recoveries on behalf of the corporate credit unions against the financial firms we maintain contributed to the corporates’ losses,” NCUA Board Chairman Debbie Matz said in a statement. “These actions fulfill our statutory obligation to act in order to minimize costs to the credit union system resulting from the crisis. They also promote accountability and ensure consumers remain protected.”

The NCUA said it will dismiss further pending suits against Morgan Stanley, while the financial firm did not admit fraud in the settlement.

Net proceeds from this settlement and others are used to pay claims against the failed corporate credit unions, including those of the Temporary Corporate Credit Union Stabilization Fund.  The settlement brings total corporate recoveries to $2.425 billion, which further reduces the likelihood credit unions will have to pay future corporate assessments.

Other litigation continues by the regulator against other financial and securities firms. The NCUA settled a similar claim in October with Wachovia for $53 million.

NAFCU Executive Vice President of Government Affairs and General Counsel Carrie Hunt thanked the NCUA for its “aggressive litigation and recovery efforts,” in a statement.   “We look forward to these recoveries ultimately flowing back to credit unions as soon as possible,” Hunt added.