Meet 5 Doomsayers Who Say the Economy Will Keep Shrinking

Only a minority of economists correctly predicted that the U.S. economy would contract last quarter. The number who expect it to keep shrinking in the current period is even smaller.

Gross domestic product declined for a second straight quarter in the April-June period, the government reported last week, cueing a debate about whether the U.S. is in a recession. The 0.9% decline compared with a median forecast for growth of 0.4% in Bloomberg’s survey of economists.

For the current period, economists are more upbeat — the median expectation is for growth of 1.7% — and there are fewer negative numbers in the survey, with only five out of 55 participants anticipating another contraction.

Still, the pessimists were right last time. Here’s why the five gloomiest forecasters in Bloomberg’s survey expect the U.S. economy to keep shrinking.

“The compositional mix is bothering us,” says Michael Gapen, the newly appointed US chief economist at Bank of America.  He expects a decline in GDP of 0.5% this quarter, followed by further contractions through early 2023.

The shock to real income that consumers have experienced, as inflation raises the cost of non-discretionary items such as food and energy, is weighing on confidence, Gapen says.

“Of course we are in a recession,” says John Dunham, a managing partner at research firm John Dunham & Associates. He expects a “shallow recession” to continue until at least next year, with a variety of factors sapping momentum from the US economy.

“Inflation is likely to continue at high levels well into the foreseeable future, and could get much worse depending on international relations, US fiscal and monetary policies, and regulatory policy which appears to be getting far worse,” Dunham says.

Academic economists stress that the negative GDP reading for the second-quarter is an advance estimate that’s highly susceptible to a revision.

But Leo Feler at UCLA Anderson Forecast says the “combination of higher interest rates and waning consumer demand is what I think might trigger a further and broader contraction of the economy later this year and early into 2023.”

Amazon Could Use IRobot Deal to Roll Into Home Care

Consumers are also using up the savings they accumulated during the past two years, Feler says. “It doesn’t look like we’re in a recession yet, but it’s still fairly early in the tightening cycle.”

Mikhail Melnik, an economics professor at Kennesaw State University in Georgia, says that inflation and ongoing disruptions in supply chains pushed the U.S. into a recession at some point in the first half of this year. The surge in prices isn’t the kind that can easily be addressed by monetary policy, he says.

“Consumers feel poorer and have to cut spending on discretionary items,” Melnik says. “The middle class is essentially being squeezed out of this economy.”

Bill Dunkelberg, chief economist at the National Federation of Independent Business, says small-business hiring and spending decisions are shaped by views about the outlook for everything from politics and economic policy to market conditions and the weather.

The latest survey of his group’s members shows a very negative outlook. 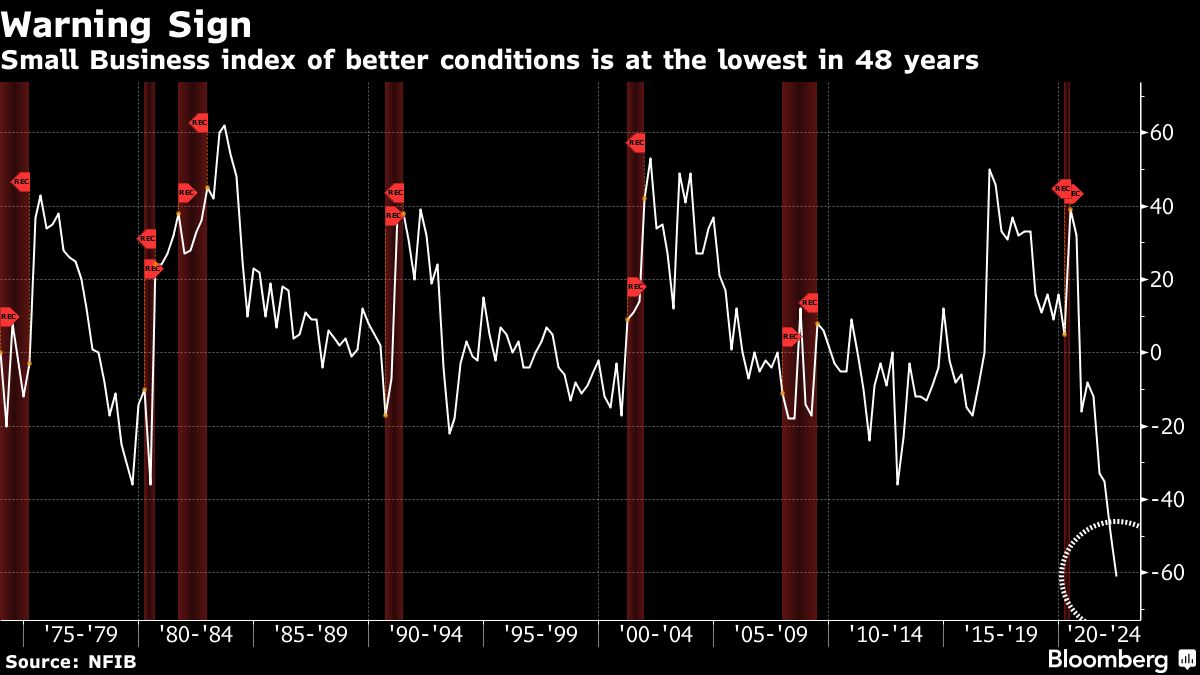 Employment is still robust with plentiful job openings and rising wages, which doesn’t sound like a recession, but the production side is faltering. Business owners expect sales to keep falling and more firms plan on reducing inventory.

“These indicators make a very strong case for a decline in economic activity,” Dunkleberg says.

Amazon Could Use IRobot Deal to Roll Into Home Care