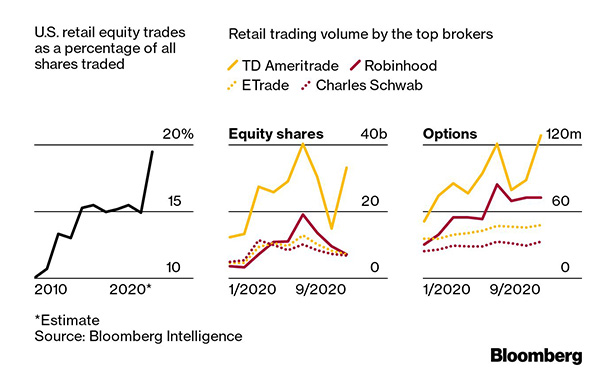 Rise of the Retail Trader: Retail is thriving but consolidating. TD Ameritrade (now owned by Charles Schwab), Robinhood, and E-Trade (owned by Morgan Stanley) account for two-thirds of flows. At those big brokers, options trading grew in the third quarter as equity volume lagged. That doesn’t mean trading is off; it means individual investors are using more leverage. 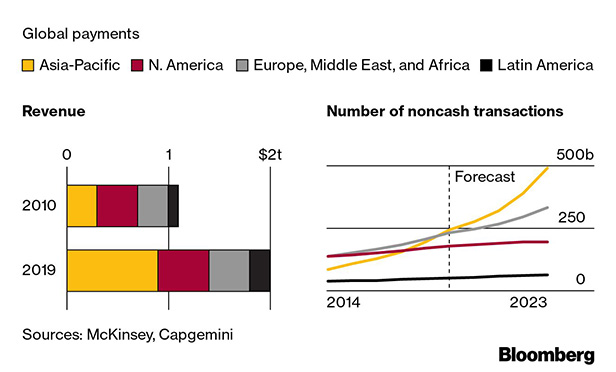 Payments: Moving money from point A to point B is profitable, and technology has made it even easier in recent years, which means banks are facing growing competition from a bevy of startups and outside apps for a piece of that pie. But whether it’s consumers paying their friends back for dinner or businesses looking to settle up with suppliers, most people still rely on traditional financial institutions. Moving money is a lucrative business: Consumer and commercial payments are a growing portion of banks’ revenue, particularly in Asia, where transactions are projected to nearly double over four years. 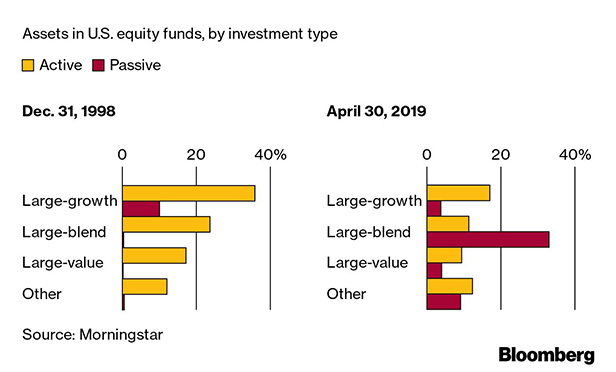 Asset Management: Investors frustrated by paying big fees for paltry returns have shifted the world of investing by turning to inexpensive funds that mimic indexes. Hedge funds aren’t faring much better, as the investor revolt has whittled away at their fees. Yet the move has created a tailwind for a giant corner of finance covering nontraditional assets. Becoming less active: Passive investment strategies have seen explosive growth in the past 20 years alongside the rise of indexing. 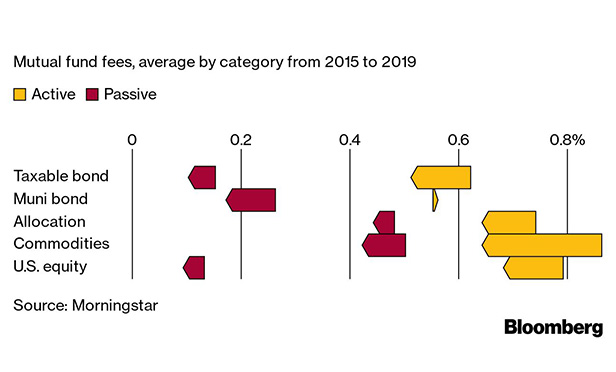 An Industry Crimped by Falling Fees: Fees for passively and actively managed mutual funds have declined across most fund categories since 2015 and are expected to drop even further. 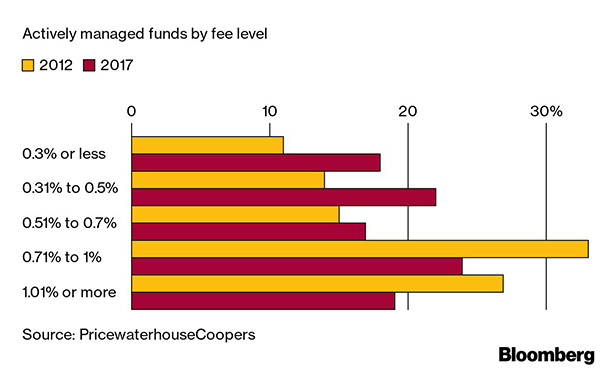 Cheap Is Chic: The actively managed universe is shifting away from higher-fee products. 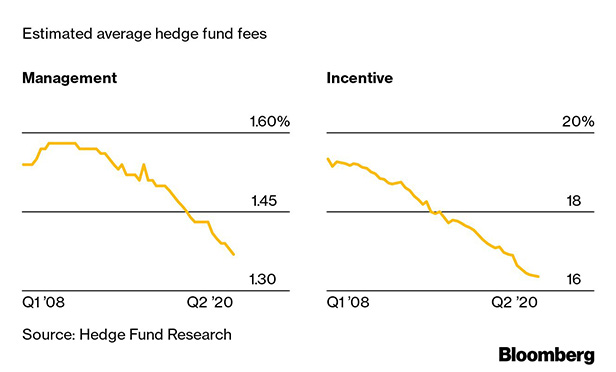 Hedge Fund Doldrums: Even the titans of finance are having a hard time charging sky-high fees. 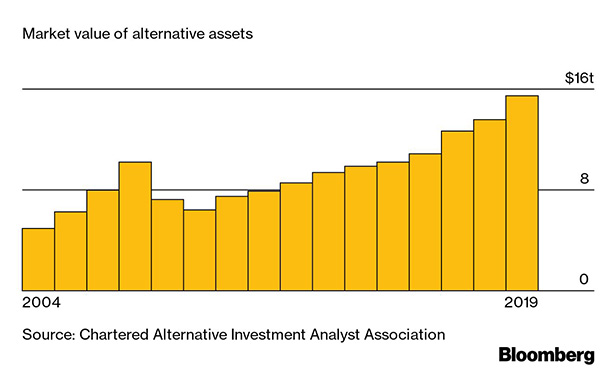 The Promised Land: In a zero-rate world, investors are piling into alternatives like real estate and crypto. 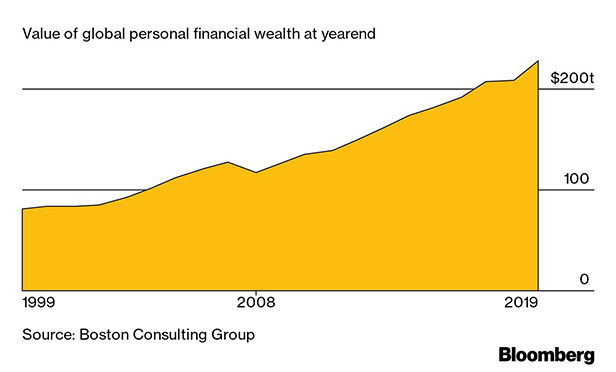 Wealth Management: Personal wealth has soared in every region around the world in the past two decades with the growth of economies and disposable incomes. Gains were especially pronounced across Asia. That’s been a boon for the wealth management industry, which has been rapidly hiring staff to keep up. It’s seen revenue climb as a result. A richer world: Personal financial wealth has almost doubled since the financial crisis. 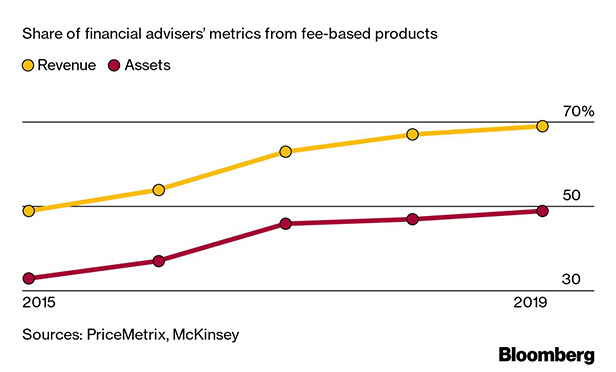 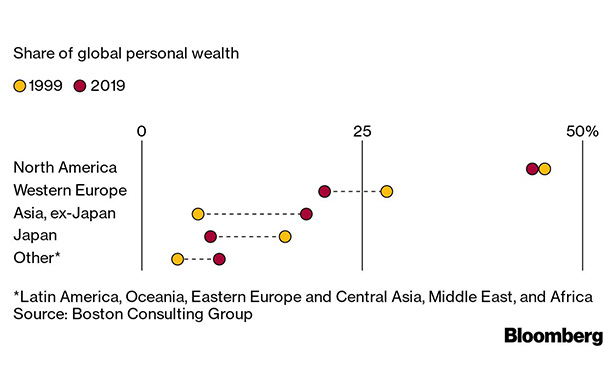 Heavier Wallets in Asia: Asia now commands a greater share of personal financial wealth. In China the rise of the middle class and a high personal saving rate have helped swell household coffers. 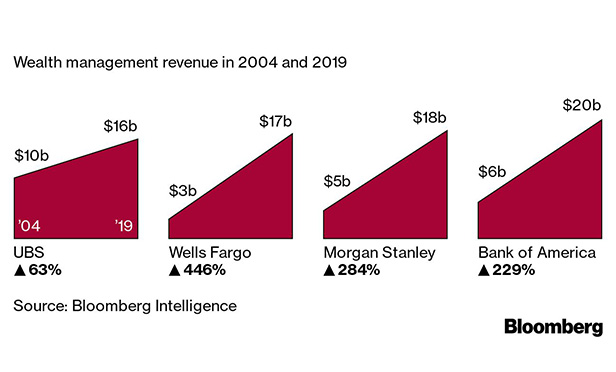 A Boon for the Big Banks: Large full-service brokerage firms have seen wealth management revenue soar in recent years as a result of consolidation in the industry and growing personal wealth. 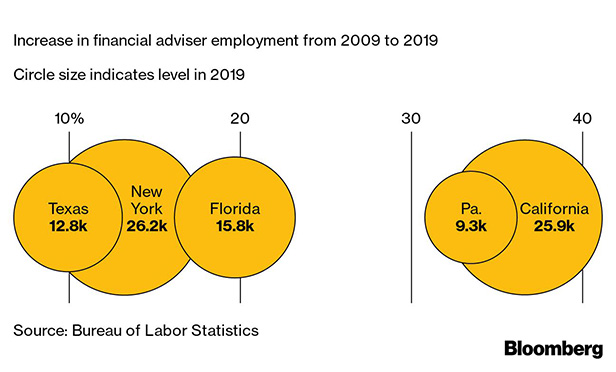 Help Wanted: In the U.S., banks are hiring more advisers in the most populous states.

Banks have faced a challenging decade, with disruptive financial technology startups and low interest rates around the world placing pressure on many of their key businesses.

But many have found ways to thrive, often by creating services to move or manage money.

Here you’ll find a look at some of the areas that have seen the biggest change in the past decade, as well as a glimpse at what might come next, such as in:

The retail brokerage market is changing. Zero commissions, Covid-19, work-from-home, and rules governing crowds have tilted risk takers away from casinos, sporting events, and gambling — and toward the U.S. financial markets.

Retail investors historically made up 10% to 14% of the market before the advent of commission-free trading in 2013. Now they represent about 20% of the market.

Copyright 2020 Bloomberg. All rights reserved. This material may not be published, broadcast, rewritten, or redistributed.