By Robert Schmidt and Ben Bain 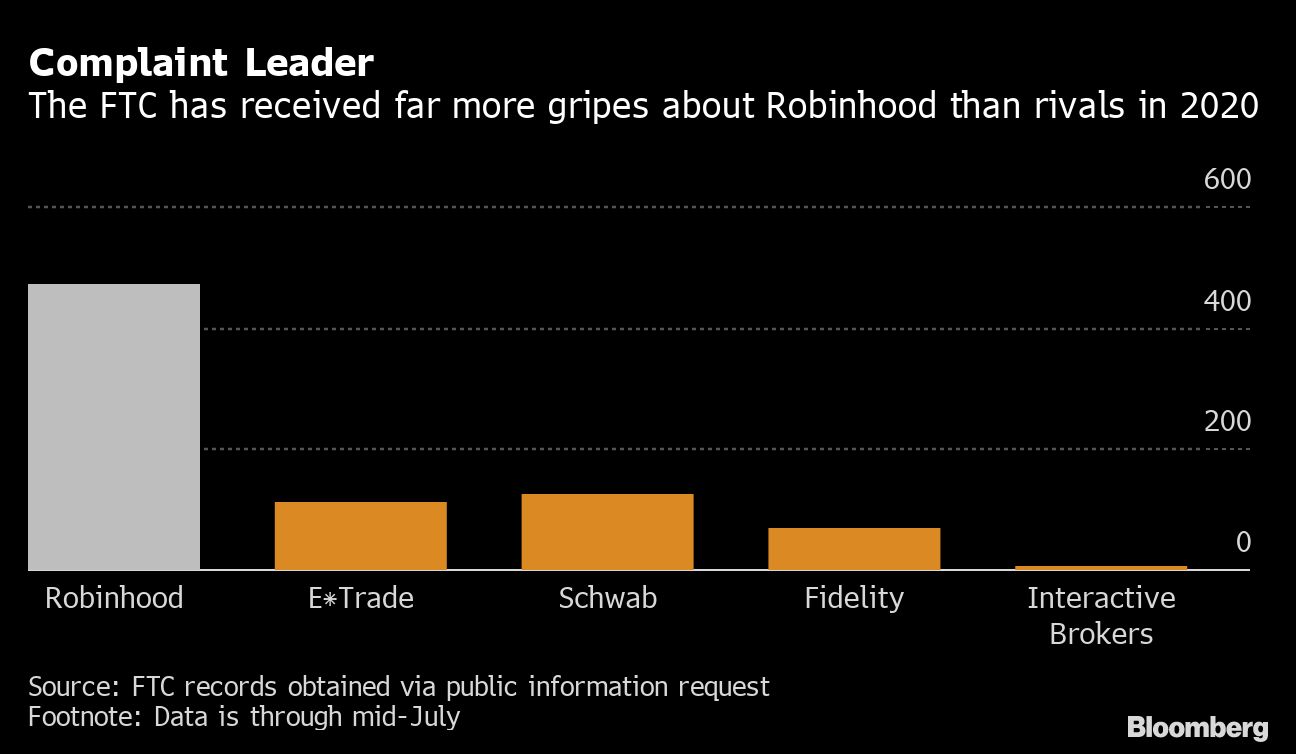 Robinhood Markets has catapulted ahead of its online brokerage rivals with a smartphone app that has attracted an army of young investors. Yet with the company’s rise has come a litany of problems: trading outages, angry customers and regulatory probes.

Over the first half of the year, U.S. consumer protection agencies received more than 400 complaints about Robinhood — roughly four times more than competitors like Charles Schwab Corp. and Fidelity Investments’ brokerage unit.

The grievances, obtained via a public records request to the Federal Trade Commission, depict novice investors in over their heads, struggling to understand why they’ve lost money on stock options or had shares liquidated to pay off margin loans.

Among the setbacks highlighted in the documents is a pivotal breakdown in early March when Robinhood stopped working for more than a day, just as markets were swinging wildly on coronavirus fears. Some complainants reported losing thousands of dollars because they couldn’t sell holdings. Others bemoaned the missed opportunity to profit.

Most disturbing to the investors was that as the chaos reigned, there was nobody at Robinhood to call for assistance. Many couldn’t even find a listed phone number.

“It just says to submit an email,” one investor in Atlanta fumed after spending a week trying to get help from the firm’s customer service department. “This company’s negligence cost me $6,000.” Another, from North Dartmouth, Massachusetts, who estimated losing $20,000, couldn’t reach a live person to close an account. “I can’t make trades, can’t take my own money and can’t leave their service.”

A company spokesman said Robinhood takes seriously its responsibilities to clients, especially when so many investors are making their initial forays into trading.

Though the firm doesn’t disclose exact figures, it has doubled its customer service representatives this year, and is hiring hundreds more, he said. After the March trading glitch, the company’s engineering team has strengthened its platform and improved reliability, the spokesman said, adding that affected customers were given compensation on a case-by-case basis.

Offering commission-free trades through technology that can seem more like a video game than a financial tool, Robinhood signed on more than 3 million clients in the first four months of 2020 and has become a symbol of U.S. investors’ resilience during the pandemic.

The rapid growth, fueled by quarantined millennials, is also drawing attention in Washington where market watchdogs and politicians are suddenly getting an earful about the broker.

Some regulators have privately vented that they feel like they have become Robinhood’s de facto customer-service line because so many of the firm’s clients contact them after failing to reach anyone at the company, said people with direct knowledge of the discussions.

Robinhood’s two main overseers, the Securities and Exchange Commission and the Financial Industry Regulatory Authority, are now investigating the company’s handling of the March outage, according to people familiar with the probe who asked not to be identified because it isn’t public. One focus is the lack of customer response.

The SEC and Finra declined to comment on any investigations, as did the Robinhood spokesman.

If the government scrutiny — which also includes inquiries from lawmakers — escalates, the risks to Robinhood are substantial. The company was recently valued at $11.2 billion after a round of venture capital funding. More trouble could endanger a potential initial public offering, something Wall Street has long expected, or a sale to a big bank or tech firm.

Moving quickly to tamp down the furor, Robinhood recently hired Dan Gallagher, a former Republican SEC commissioner steeped in the culture of federal regulation, as its top lawyer. The company is also opening an office in the nation’s capital and hiring lobbyists to aggressively make its case before Congress and federal agencies.

“Robinhood is empowering a whole new class of investors, and I think it is critical for us to have a voice in Washington to advocate for our customers and fairer markets,” Gallagher said in an interview.

Founded seven years ago, Menlo Park, California-based Robinhood bills itself as “investing for everyone.” It has sought to disrupt the often staid brokerage industry by making investing cheap, easy and, yes, fun. Trades can be placed with a quick swipe and may be heralded with a burst of virtual confetti.

More than 13 million people have opened Robinhood accounts, which don’t have minimum balance requirements. The median age of the firm’s customers is 31, and nearly half say they’re first-time investors.

Even though its clients tend to be unsophisticated traders, the firm has expanded into options and cryptocurrencies, products that are riskier than stocks. It also offers a premium package that costs $5 a month and gives investors access to research as well as the ability to buy securities with borrowed money, which can amplify gains or losses.

Robinhood facilitates trades for investors but doesn’t offer stock recommendations, allowing it to escape some of the onerous regulation faced by competitors with a lot of human employees. The company makes the bulk of its money by selling customer orders to Wall Street trading firms, a common industry practice that existed long before Robinhood.

This summer, lawmakers’ anxieties about the company were heightened after the suicide of a 20-year-old college student who mistakenly thought he had lost more than $700,000 while using the firm’s app to bet on options. The tragedy stirred concerns that Robinhood was allowing customers to take risks they didn’t comprehend — and incur losses they couldn’t afford.

Two senators and four House members sent a sharply worded July 13 letter demanding answers about the suicide, the trading snafus and the firm’s efforts to provide training and safeguards for clients.

“Robinhood has been very successful in marketing itself as an easy to use and low-cost brokerage service among first-time retail investors,” the Democratic lawmakers, led by California Representative Brad Sherman, wrote. “By seeking to cultivate a customer base of relatively inexperienced investors, you have also taken on an especially great responsibility to make sure your customers are protected.”

Robinhood believes it has a good story to tell on Capitol Hill, about how it has “democratized” investing and compelled the online brokerage industry to drive down commissions to zero — a phenomenon some call “the Robinhood effect.”

It’s a talking point that the firm’s two founders, Baiju Bhatt and Vladimir Tenev, regularly use, but few in Washington have heard. The company reinforced that message in an 11-page letter responding to the lawmakers.

“Our goal is to empower more Americans of all backgrounds to take greater ownership of their financial future, which we believe can help shrink the gap between the ‘haves’ and the ‘have-nots,’ and lead to a healthier, more robust economy,” wrote David Dusseault, president and chief operating officer of the subsidiary Robinhood Financial. “Our ethos is a commitment to building products that make the financial markets more accessible and approachable, while demystifying otherwise intimidating financial concepts.”

The letter added that after the death of student Alex Kearns, the broker was re-tooling its interface for options trading, putting more investor education materials on its app and considering new requirements for investors who want to make more complex bets. Robinhood also made a $250,000 donation for suicide-prevention efforts.

On the regulatory front, Robinhood’s most pressing issue is the joint SEC-Finra investigation. But the broker is also looking to establish good relations with other agencies, including the Treasury Department, Consumer Financial Protection Bureau, FTC and overseers in each state.

To guide the company through that thicket, Robinhood brought on Gallagher, 48, as chief legal officer in May. An attorney who specializes in the often arcane world of broker regulation, Gallagher is friendly with lawmakers of both parties and more comfortable in the Washington uniform of a suit and tie than the tech world’s hoodie and Allbirds sneakers.

He’s also brought deep relationships with government officials to the firm. Among his close confidants is SEC Chairman Jay Clayton.

Moskowitz has worked for Republicans on the House Financial Services Committee and the Senate Banking Committee, and he’s been an enforcement lawyer at the SEC. Robinhood also named new chief compliance officers at two subsidiaries in August, one who came from Wells Fargo & Co.’s brokerage and another from Fidelity.

Another concern for Robinhood is that the firm’s surging popularity — particularly among traders who will make up the next generation of investors — has other online brokers gunning for it. The rivals, not surprisingly, have been eager to point out Robinhood’s setbacks in discussions with politicians and regulators, as well as in public comments.

Morgan Stanley Chief Executive Officer James Gorman, for instance, praised his bank’s acquisition of E*Trade Financial Corp. on a July 16 earnings call, drawing a distinction with Robinhood’s troubles, and taking a subtle dig at the firm though not mentioning it by name.

E*Trade, Gorman said, has added hundreds of thousands of new accounts without suffering major breakdowns during the pandemic. “But with that has come real money, not just kids playing,” he said.

The FTC complaints obtained by Bloomberg News, which cover the March outage, do show a wide disparity between Robinhood and its peers. From January through mid-July, the agency had received 473 reports about Robinhood, compared with 126 for Schwab, 111 for E*Trade, 69 for Fidelity and seven for Interactive Brokers Group Inc.

Looking to make sure that its competitors don’t succeed in framing the narrative about Robinhood in Washington, the company this month retained four outside government relations firms.

Some of the lobbyists have longstanding connections to the SEC and Gallagher, including Justin Daly, a former Senate Banking and SEC aide, and Walton Liles and Ben Brown of Blue Ridge Law & Policy. Two others — The Williams Group and Thorn Run Partners — have Democratic ties.

One point the lobbying effort wants to get across is that while Robinhood’s investors may be younger, not all are day traders. Many use a buy-and-hold strategy, and those with less money can purchase fractional shares that allow them to diversify their portfolios with more expensive blue-chip stocks. The company also provides numerous educational materials on its app.

Robinhood adds that it’s addressing its customer-service problems. Dusseault, Robinhood Financial’s president, said in his letter to lawmakers that the company was on a hiring binge and would end 2020 with almost triple the amount of representatives that it employed in January, including some who are registered brokers. Still, he didn’t promise that there would be a phck k imkone number investors could easily find and call when they need help.