Professors Bloink and Byrnes, who hold opposing political viewpoints, share their opinions on the Trump proposal to index capital gains taxes for inflation.

The Trump administration has announced that it wants to index the system for taxing capital gains for inflation going forward.

Currently, individuals are taxed at 20%, 15% or 0% on long-term capital gains based on their income levels for the year. Individuals are generally taxed on the entire amount of gain, which is calculated by subtracting the client’s basis in the investment (usually the original purchase price) from the amount that the client received upon sale or disposition of the asset.

Despite this, many assets appreciate in value over time for a variety of reasons, and when an asset is held over a long period of time, inflation will likely play a role in the asset’s eventual sale value. Because of this, the administration wants to tie the system to an inflation-indexing system similar to the one that increases the value of many other tax items each year, including Social Security payments and permitted tax-free retirement account contributions.

We asked Professors Robert Bloink and William Byrnes, who are affiliated with ALM’s Tax Facts, and hold opposing political viewpoints, to share their opinions on the potential ramifications of indexing the capital gains tax system for inflation.

Bloink: This is just another Trump ploy to provide tax breaks for the extremely wealthy.  Indexing capital gains for inflation would solely benefit the very wealthy and add a huge amount to the federal deficit. The actual capital gains tax brackets technically already have an inflation indexing component, because they are tied to the ordinary income of the taxpayer who sells the asset.

Byrnes: But the fact is, taxpayers are still being taxed on appreciation in asset value that is solely based on inflation. To make the capital gains tax system more fair, we need to exempt that inflation-based appreciation from tax.

Bloink: Indexing the capital gains tax system for inflation alone would not be fair at all. It would create an incentive for wealthy taxpayers to create inefficient tax shelters because the proposals never mention indexing other tax items that are related to capital expenses, such as the interest expense deduction and depreciation system. Not placing corresponding adjustments on these rules gives a huge incentive for taxpayers to engage in tax shelter activities.

Byrnes: But not indexing the capital gains system punishes taxpayers who are willing to make investments in our economy and take on the risk that that entails. Long-term investments are vital to our economy and are critical to the growth potential for small businesses that need investors in order to get on their feet in the first place.

Bloink:  The problem Professor Byrnes lays out is one that only the very rich have to face. The long-term capital gains tax rate is already significantly lower than the top ordinary income tax rates, meaning that wealthy taxpayers already have an incentive to shift funds into capital gains producing assets—in other words, to invest in our economy.

Byrnes: When the economy is strong, it’s good for everyone, not just the very rich. Investment is the fuel that keeps the economy going, and we need to take further steps to encourage that investment so that the already strong economy can continue along that path.

Bloink: The bottom line is that indexing the capital gains tax system is a benefit for the very wealthy, and would encourage inefficiencies as these wealthy taxpayers look for new opportunities to shelter funds from tax.

In a Seller’s Market, What’s an RIA Firm Worth?

Sellers' expectations are far above what most buyers are looking to pay, according to a new Fidelity study. 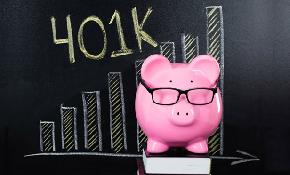