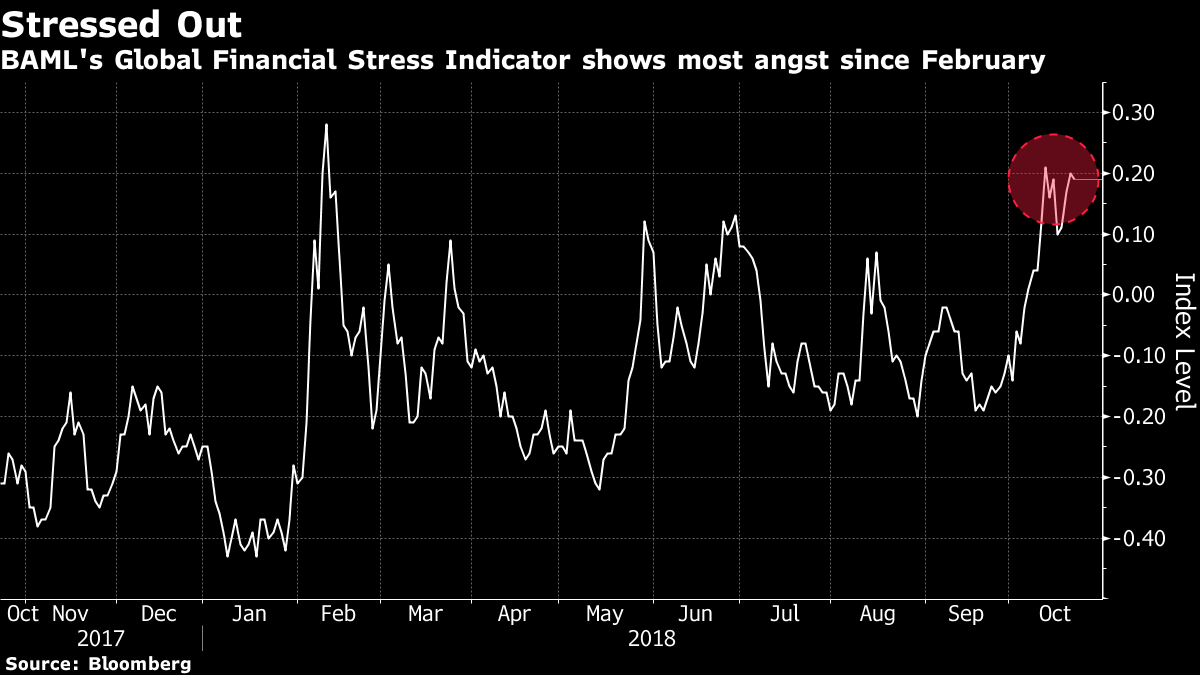 Forget fallout from the midterms, a murdered journalist, Brexit or the trade war. The biggest reason to brace for enduring stock volatility may be the simplest: It’s just time.

Bank of America Merrill Lynch’s equity and quant team say market signals from the ever-flattening yield curve are clear as day: stock markets are due to begin a new era of elevated price swings.

“A flattening yield curve signaled a withdrawal of liquidity and over the last three cycles has preceded rising volatility by a few years,” the team, including Savita Subramanian, wrote in research this week. The curve has been flattening “over the past couple of years,” they noted.

It’s a version of the quantitative tightening argument for why volatility is climbing: The unprecedented tranquility in stocks seen through the start of the year was a byproduct of extraordinary global stimulus, and it’s reversing as the tide of liquidity recedes.

Bank of America’s call — echoing others — comes as investors scramble to judge whether the current turmoil in equity markets represents a blip or fundamental shift in regime. The S&P 500 Index fell for the 12th session in 14 on Tuesday. Hedge funds that reaped fortunes betting against share swings are nursing losses once more, with echoes of the February tumult. 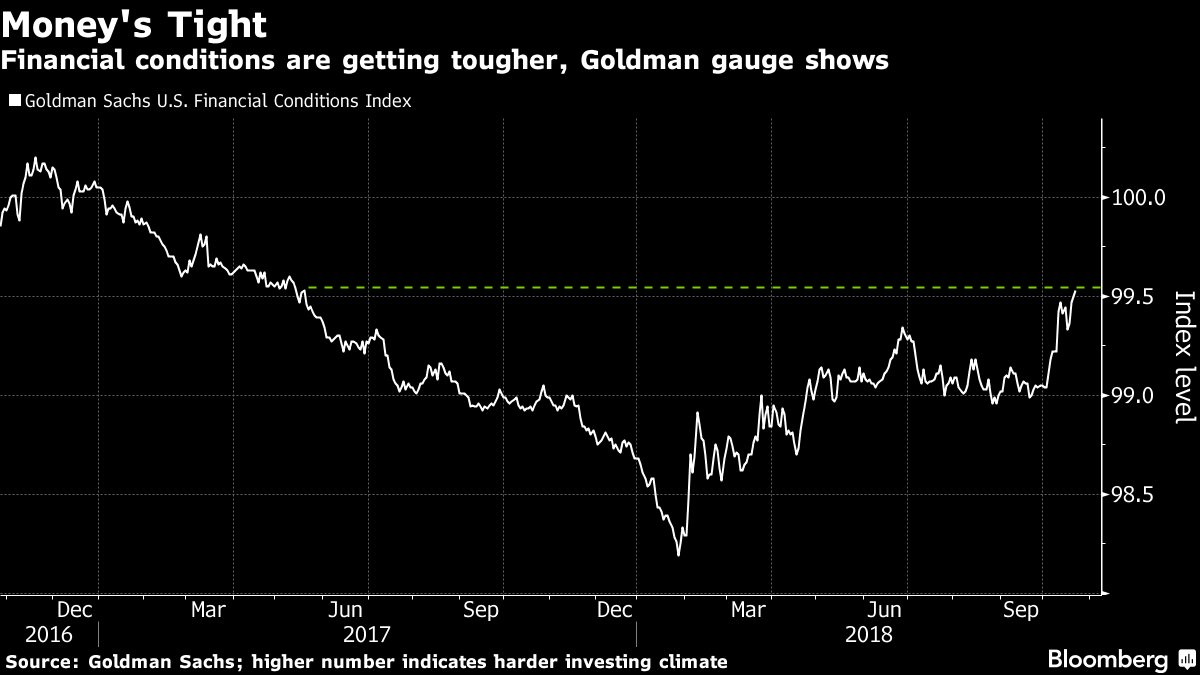 In some respects, BAML is doubling down on an earlier prediction that liquidity would see an outright contraction by the end of the year. So far, the evidence appears to be moving in the strategists’ favor.

Why Balking at SEC Rules Will Not Make You a Target: SEC Roundup

BofA to Sell $20B Alt Operations to iCapital

Against that backdrop, the S&P 500 Index slumped 6.9 percent in the month as of 9:57 a.m. in New York. Earlier in October, the Cboe Volatility Index — a measure of 30-day implied volatility for the U.S. benchmark — touched its highest in eight months. Known as the VIX, it has since retreated, but remains above its one-year average.

Goldman Sachs Group Inc. reckons economic growth is the key driver of volatility. The bank is predicting a moderation of U.S. expansion next year, and in a note on Monday said that’s likely to boost S&P 500 volatility by three to six points. 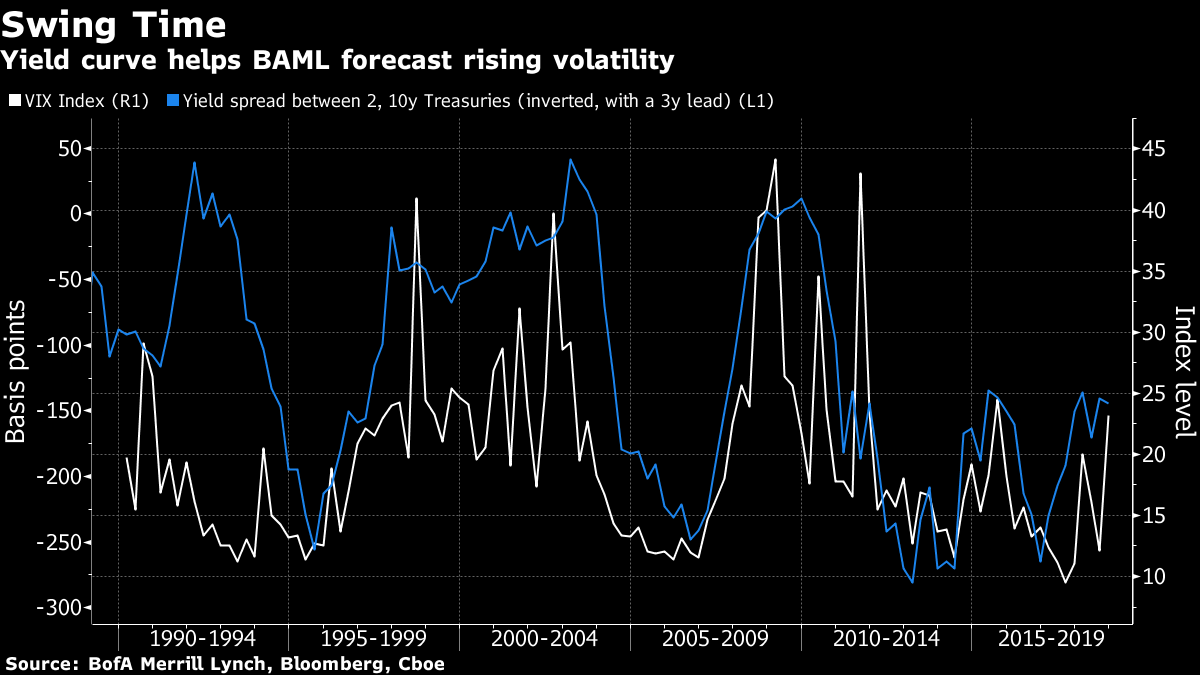 For investors deciding whether to keep skin in the game, move to cash or scoop up protective hedges, that adds a sense of urgency as late-cycle bursts of volatility become more frequent.

Hedge funds that bet against equity-price swings were left holding the bag in the wake of the VIX spike on Oct. 10 as the price of near-term futures surged above those further out on the curve.

Still, by some measures it’s business as usual, as speculators were still net short some 33,000 VIX futures contracts on Oct. 16 — down from 113,000 a week earlier, CFTC data show.

Meanwhile, as the likes of BAML and Goldman forecast choppy times ahead for equities, conditions look little better across other assets. BAML’s Global Financial Stress Indicator — a gauge of risk across asset classes, hedging demand and investor flows — is near the most elevated in eight months.

BofA to Sell $20B Alt Operations to iCapital