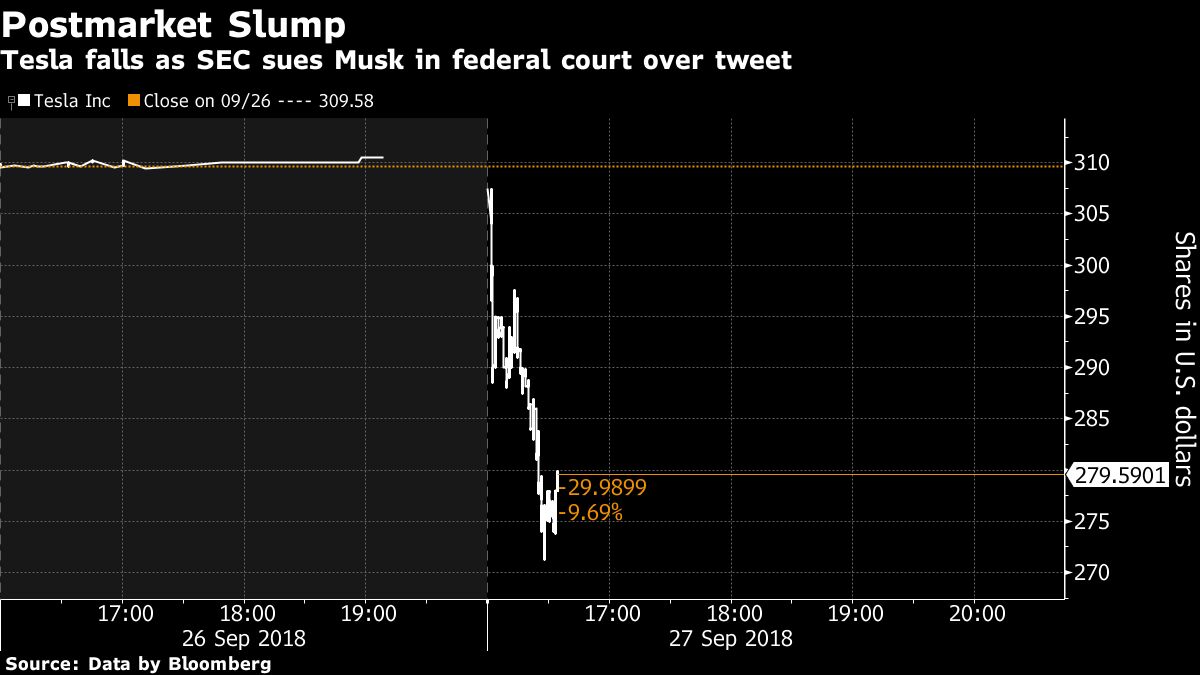 Elon Musk was sued by the Securities and Exchange Commission for his explosive August tweet about taking Tesla Inc. private, putting him suddenly in jeopardy of losing control over the electric-car company he co-founded.

Moving with unusual speed, the SEC said in a lawsuit filed in New York that Musk misled investors by claiming falsely that he had lined up funding for the transaction.

The SEC said it’s seeking unspecified monetary penalties and, more importantly, will request that a judge bar Musk from serving as an officer or director of a public company.

For investors already worried about the company’s ability to produce and sell cars fast enough to start generating profits, the prospect of losing Musk — a billionaire entrepreneur whose name is synonymous with Tesla — was unnerving.

They dumped the stock, driving it down 13 percent in after-market trading to below $270 and deepening a selloff that began as the go-private gambit quickly unraveled in August.

“Musk’s statements were false and misleading,” Stephanie Avakian, co-director of the SEC’s enforcement division, said at a press conference in Washington. “They lacked any basis in fact.”

In the lawsuit and at the news conference, the SEC officers went to great lengths to spell out the Tesla CEO’s carelessness and his erratic behavior — from threatening to “burn” short-sellers who targeted Tesla stock to seeking to amuse his girlfriend, the pop singer Grimes, by weaving in a “marijuana culture” reference to his go-private bid.

(He set a buyout price of $420, a number he landed on in part because it’s code for marijuana consumption.)

Musk called the lawsuit “unjustified” and said it left him “deeply saddened and disappointed.”

“I have always taken action in the best interests of truth, transparency and investors,” he said in a statement. “Integrity is the most important value in my life and the facts will show I never compromised this in any way.”

Musk had shot off a tweet on Aug. 7 saying he was considering taking the company private and had secured funding for a deal. Tesla shares soared immediately afterwards.

“In truth and in fact, Musk had not even discussed, much less confirmed, key deal terms, including price, with any potential funding source,” the SEC said in the complaint.

Even before the go-private tweet, the SEC was investigating issues at Tesla including its car sales projections. In addition to the SEC suit, the Justice Department is also looking into whether Musk misled investors, Bloomberg News has reported.

On July 31, the SEC said in its complaint, Musk met with three members of a “sovereign wealth fund” at Tesla’s factory in Fremont, California, for approximately 30 to 45 minutes. In that meeting, a member of the fund expressed interest in taking Tesla private.

Musk took that to mean he was proposing a “standard” going-private transaction, but the terms were not discussed.

Musk has previously said he was talking to Saudi investors about a plan to take the company private.

On Aug. 2, Musk sent an email to the company’s board of directors, chief financial officer and general counsel with a subject line of “Offer to Take Tesla Private at $420.”

In the email, Musk explained he wanted to sidestep the “constant defamatory attacks by the short-selling community, resulting in great harm to our valuable brand.”

On Aug. 6, Musk discussed a potential takeover with an unnamed private equity executive who has experience with such transactions. That executive told Musk that such a deal was “unprecedented” in his experience.

The next day, Musk tweeted from his cell phone: “Am considering taking Tesla private at $420. Funding secured.” Shares rose 11 percent and trading volume spiked. About 12 minutes later, Tesla’s head of investor relations sent a text to Musk’s chief of staff asking, “Was this text legit?”

About 20 minutes later, the company’s chief financial officer texted Musk: “Elon, am sure you have thought about a broader communication on your rationale and structure to employees and potential investors. Would it help if [Tesla’s head of communications], [Tesla’s General Counsel], and I draft a blog post or employee email for you?”

Musk responded, “Yeah, that would be great.”

Tesla’s chief financial officer then replied, “Working on it. Will send you shortly.”

Musk didn’t clarify his statement until an Aug. 13 blog post in which he tried to walk back the tweet. On Aug. 24., the company announced that it would not be pursuing a buyout.

“Musk made his false and misleading public statements about taking Tesla private using his mobile phone in the middle of the active trading day,” the SEC said.

“He did not discuss the content of the statements with anyone else prior to publishing them to his over 22 million Twitter followers and anyone else with access to the Internet. He also did not inform Nasdaq that he intended to make this public announcement, as Nasdaq rules required,” the regulatory body stated.

“Musk’s false and misleading statements and omissions caused significant confusion and disruption in the market for Tesla’s stock and resulting harm to investors,” the SEC went on to say.

While the filing of the lawsuit wasn’t necessarily surprising, the speed with which it was pulled together shocked many long-time watchers of the SEC, an agency known for being much more deliberate in its actions. Steve Peikin, the SEC’s other co-enforcement director, said the agency felt that the impact would be greatest if the case was brought soon after the alleged misconduct.

“We conducted a swift investigation here,” Peikin said at the news conference. “The investigation was complete and it was time to make a charging decision and we made one.”

The request to bar Musk from serving as corporate officer — which would apply to all publicly traded companies — could force him to step to the negotiating table quickly to reach a settlement. Otherwise, he risks leaving investors wondering about the fate of a company whose image has become intertwined with that of its maverick CEO.

“It’s unusual for a case of this significance to move this quickly, in particular when you’ve got a high-profile individual,” said Robert Long, a former SEC enforcement attorney now in private practice at Bell Nunnally in Dallas. Still, because the investigation was narrowly focused on several tweets, he said the agency “could have conducted its investigation quickly.”

SEC hasn’t taken enforcement action against a municipal advisor in over a year, but that situation could change very soon.