This will be the first time the SEC has had a full commission since 2015; the Senate also approved a new Labor EBSA head.

The full Senate on Thursday confirmed by voice vote Hester Peirce and Robert Jackson to be commissioners at the Securities and Exchange Commission.

The Senate Banking Committee approved their nominations by voice vote on Nov. 1.

The Senate also approved Preston Rutledge to be assistant secretary of Labor for the Employee Benefits Security Administration. Rutledge will be instrumental in shepherding through any change that Labor makes to its fiduciary rule.

In testimony during their nomination hearing before the Senate Banking Committee on Oct. 14, both Peirce, a fellow at the pro-free-market Mercatus Center, and Jackson, a Columbia Law School professor, voiced their support for the agency moving ahead on a fiduciary rulemaking, but they signaled that the agency should tackle other priorities first.

Jackson, a Democrat, said at the October hearing that the SEC “should have an important role in the development of these fiduciary standards; it is a natural area for the SEC to do a rulemaking,” citing SEC Chairman Jay Clayton’s work with the Labor Department and other regulators “to develop the SEC’s presence.”

Peirce, a Republican, reiterated her concerns about Labor’s fiduciary rule “as it’s currently written,” stating that she’s “glad that calmer minds have prevailed and that people at DOL and at the SEC are taking a look at it.”

With a full SEC and an EBSA chief, industry officials say collaboration between the SEC and Labor on a fiduciary rule can now move ahead.

David Tittsworth, former CEO of the Investment Adviser Association who’s now an attorney with Ropes & Gray in Washington, said that “Clayton should be pleased to have a full contingent of five commissioners – the first time since 2015 – before embarking on his 2018 regulatory priorities.”

“It is difficult for the work on the fiduciary rule to move forward without political leadership” at EBSA and without a full SEC, said Fred Reish, partner at Drinker Biddle & Reath in Los Angeles. Rutledge’s “confirmation will cure the first part of that.”
Rutledge’s “years of experience with retirement issues and the political environment will make him an effective leader for moving the fiduciary rule through the DOL and coordinating with the SEC,” Reish added.

The SEC’s short-term agenda, according to a filing with the Office of Management and Budget on Dec. 14, includes an SEC rulemaking, in coordination with the Labor Department, regarding standards of conduct for investment professionals, aka a fiduciary rulemaking.

Current IAA CEO Karen Barr added that IAA is “pleased that the Commission will now, after more than two years, have a full complement of five commissioners.”

There is bipartisan backing for extending PPP eligibility to firms backed by private equity and venture capital.

‘No Limit’ to What the Fed Can Do: Chairman Powell

That is, as long as it's incompliance with Dodd-Frank, according to the Fed Chairman. 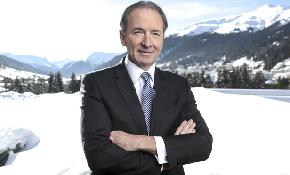 Morgan Stanley Says Its CEO Has Recovered From COVID-19

The firm, which has some 15,500 financial advisors, will report its first-quarter 2020 earnings on Wednesday.