What good are "low rates" if Ben Bernanke can't refinance his home?

Ben S. Bernanke — the former Federal Reserve chairman — recently reported at a conference of the National Investment Center for Seniors Housing and Care that he had trouble refinancing his own mortgage.

I think Bernanke’s comment, which was covered by reporters from Bloomberg, supports an argument I’ve been making for months: The current ultra-low interest rates aren’t doing much, if anything, to help consumers increase spending.

Certainly, LTCI issuers may have made some mistakes when they priced their coverage — but they thought solid investment rates on high-quality bonds would give them some wiggle room. Instead, rates fell to the floor, and insurers have had to use all of that wiggle room just to keep their heads above water.

What’s bad for annuity issuers and LTCI issuers is terrible for retirees.

The low rates certainly do some good for federal agencies that issue bonds, and for banks and publicly traded companies with great credit ratings. They also help people who still have old adjustable-rate mortgages and revolving-debt credit cards in place, and affluent, lucky, well-organized people who have never had any life or credit hiccups and can still qualify to get new credit.

But, aside from people using special government programs, such as student loan programs, many fine, classy, bill-paying, employed people have no way to new credit.

My guess is that, in the real world, Bernanke must have a way to shake hands with a bank president, hint broadly about “His Friends” who want him to be able to refinance his house, and refinance his house, but, if he goes through normal channels, even he’s a credit pariah.

Central bankers need to stop pushing on the interest rate string and figure out a way to help honest, bill-paying people get credit. Otherwise, they are the equivalent of a doctor who tries to cure a patient’s asthma by putting a plastic bag over the patient’s face. Sure, the plastic bag might stop the patient’s wheezing, but it may have other, unwanted effects.

The president of the NAIC says that organization has a tool that can help. 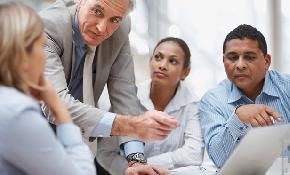 Most college students have little idea of what a financial advisor actually does all day.

17 Reasons Financial Advisors Should be Proud of Their Profession

When you feel like the world looks askance at financial advisors, think about all the ways you help people.