Senate Banking Aide: Committee Has ‘No Interest’ in Bill to Block Fiduciary Rules

Wagner bill passes House, but Senate Banking's Johnson says he won't focus on any bill "the president clearly has no interest in signing."

Despite the fact that the House of Representatives passed HR 2374, also known as the Wagner bill, by a 254-166 vote late Tuesday afternoon, the Senate Banking Committee has “no interest” in taking up such legislation, a Democratic Banking Committee aide told ThinkAdvisor.

Senate Banking Committee Chairman Tim Johnson, D-S.D., “will keep working with his colleagues on the committee’s top priorities – housing finance reform and Janet Yellen’s nomination to be chairman of the Federal Reserve – rather than focusing on bills the president clearly has no interest in signing into law.”

Indeed, the Office of Management and Budget released a statement Monday that President Barack Obama’s senior advisors would recommend that he veto H.R. 2374, the Retail Investor Protection Act, introduced by Rep. Ann Wagner, R-Mo. That bill would require the DOL to wait to repropose its fiduciary rule until 60 days after the SEC issues its fiduciary proposal under Section 913 of the Dodd-Frank Act.

Phyllis Borzi, assistant secretary of Labor for the Employee Benefits Security Administration, said Tuesday at the American Society of Pension Professionals and Actuaries’ annual conference in National Harbor, Md., that it was “entirely possible” that the DOL’s fiduciary reproposal could be at the Office of Management and Budget by year-end.

“We are coming very close to finishing our work” on the reproposed rule, Borzi told the conference attendees. The “conflicts of interest rule,” she continued, is DOL’s “highest priority.”

Fiduciary advocates were quick to come out against Wagner’s bill. After news of House passage, the Financial Planning Coalition urged the Senate to “reject” H.R. 2374, which the groups said was “an investor protection bill in name only.” In reality, the coalition said, “it is a ‘back door’ attempt to undermine investor protection provisions in the Dodd-Frank Act and prevent the SEC and DOL from requiring advisors to put investors’ interests ahead of their own.”

Rep. Maxine Waters, D-Calif., ranking member on the House Financial Services Committee said Wagner’s bill “undermines” the new federal protections put in place by Dodd-Frank, which ensures “that financial advisors recommending products like 401(k)s and IRAs only do so with their customers’ best interests in mind – not their own profit margins. And [Dodd-Frank] ensures those that do not are held liable.”

“While some members of Congress have expressed concern that the process of finalizing these protections has been challenging, this bill is not the solution,” she said.

The rationale for H.R. 2374, Rostad said, “is based on the myth that only full-service and conflicted brokers serve small investors and the marketplace is incapable of providing unconflicted advice or ethical guidance to small investors. The millions of smaller or moderate investors who receive advice or guidance today from discount brokers, Web-based advisors or RIAs who cater to smaller investors, do not, according to this myth, exist today.”

Check out DOL’s Borzi: Fiduciary Redraft Could Advance by Year End on ThinkAdvisor. 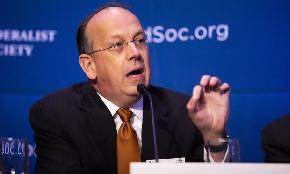 "This case presents a remarkably weak case for invalidating an Act of Congress," Paul Clement told the Supreme Court on Wednesday.