Do you remember where you were when Donald Trump and Ivana Trump announced they were divorcing?

It was 1990, I lived in Anaheim, California, and the headlines went on for 11 days in a row about their divorce. Liz Smith got three months’ worth of news coverage out of their divorce.

Who knew at the time that Donald Trump would eventually be president of the United States? He has dominated the political scene since 2015 and, as a result, Ivana has been in and out of the news since then.

Last week, it was announced that she was found at the bottom of a set of stairs in her Manhattan apartment, where the New York Fire Department responded to a report of cardiac arrest. The medical examiner’s office will determine the cause of death.

For me and, I believe, many clients and prospects, the news of the death of someone like Ivana Trump leads to other thoughts.

Ivana Trump was a model who was raised in the former Czechoslovakia and married Donald Trump in 1977, holding key positions in his business, including the Trump Organization.

Ivana Trump was an icon at the time, Vanity Fair called her the “Power Blonde.” It described her as a “working mother, four days a week,” and said she “boarded a big black helicopter, [and] carried a Vuitton briefcase.”

One of Vanity Fair’s articles about her said: “She thinks and talks numbers like a platinum-blond computer. The numbers are money, and the money is big. This is not some fluff job her husband whipped up to give his restless wife something to do.”

In September 1990, Vanity Fair said, “Unfortunately for Donald and Ivana Trump, all that glittered wasn’t gold. But the reign of New York’s self-created imperial couple isn’t over yet.”

The death of Ivana Trump, along with the deaths of Bob Saget, Meat Loaf, James Caan, Naomi Judd, Ray Liotta, Sidney Poitier, Peter Bogdanovich, Ronnie Spector, Louie Anderson and others this year, is a sign that the older generation is dying off.

These people don’t mean anything to millennials — those born between 1981 and 1994 — and maybe that’s the way it should be.

The millennials are members of the first generation that doesn’t know what it’s like not to have the internet, or even cellphones. (I got my first cellphone installed in my car in 1984. It was a UHF phone. You got an operator and gave the operator the number. The operator dialed it and connected you. Operators listened to the calls. If you cussed, they warned you they would disconnect you.)

This generation was raised with a laptop, iPad, iPhone, tablet and Apple Watch. (We boomers fantasized about the Dick Tracy watch. Look it up.)

My new car steers itself. Ring Doorbell notifies me when someone is at my front door (even when I’m at my grandkids’ house in Iowa). FedEx can open my garage door to leave packages, and I can log onto my desktop from anywhere around the world.

They are comfortable learning and using the latest devices and software releases in the workplace. The pandemic has resulted in this generation actually demanding they be able to work from home. (We members of earlier generations used to demand two-ply toilet paper in the employee restroom, and we didn’t always get it.)

So what does all this have to do with Ivana Trump’s death?

I’m 68, barely five years away from her age.

I sat in a barber chair in the 1980s, watching Donald Trump being interviewed by Oprah Winfrey where he said he might, one day, consider running for president, after Oprah asked him, and he said he thought he’d win.

I vividly remember thinking that he should.

Her death scares me.

My generation is dying off, slowly. A few every year, but they are dying off. Whenever someone my age or within 10 years of my age dies, I pause.

The president is 79. People in leadership in Congress and around the world are over 80. Yet the people who are “social” famous today are people like Jerome Jarre, Roman Atwood, Brittany Furlan, Bethany Mota, Alex Lee and Justin Bieber. (I left out the Kardashians. Who doesn’t know them?)

I admit I don’t know much about some of them, but I do know technology. I still work, do webinars, coach and train people, create new products and use email marketing and social media to promote what I do.

I write articles for industry-related magazines and speak at industry events, with hundreds if not thousands in attendance.

I’ve had some health issues. I had atrial fibrillation seven years ago, and died on the emergency room table three times. (They revived me, thank goodness.) I had a pacemaker put in. (A heart doctor told me one time I had a cheap one put in.)

A year later, I had three strokes, and I’ve had six heart procedures. I recently had rotator muscle surgery on my left shoulder and was told my right shoulder is so damaged they’ll have to do a shoulder replacement.

And I just didn’t see it coming.

My wife and I have been married for 37 years. My mom lived with us and died at the age of 88 (20 years from now for me) of vascular dementia. The last few months of her life, she was hospitalized a number of times. Each time we brought her home to die.

The last time she was in the hospital she was hallucinating, thought my older sister was trying to lock her up. She had gotten out of the hospital bed, with the back of her gown open, catheter bag dragging on floor. I was holding her back at the hospital room door, trying to reason with her, physically stopping her from leaving the room and pulling the catheter out, and she looked me in the eye and said, “Son, I have more life to live.”

I don’t know if Ivana Trump felt that way when she had her heart problem, if she was conscious when she fell down the stairs, or if she thought the same thing.

I know when I heard of her death, I thought, “I have more life to live.” 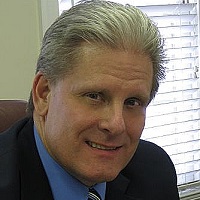 Lloyd Lofton is the founder of Power Behind the Sales and the author of “The Saleshero’s Guide To Handling Objections.”

Ivana Trump, in 2004, at the Ascot Races. (Photo: John Barclay/Bloomberg)