The good news is that yields in U.S. Treasury securities may be near their peak. The bad news is that makes the recession I’ve been forecasting since February more likely.

The current campaign by the Federal Reserve to raise its main policy interest rate — the overnight federal funds rate — in response to rapid inflation normally precipitates a business downturn.

A soft landing occurs as the central bank lowers the funds rate after a series of increases with no recession unfolding. Until the Fed cuts rates, it’s uncertain as to whether its credit-tightening campaign is over or has merely paused.

The 1.30-percentage-point jump in the 10-year yield implies a 3.5-percentage point rise in the funds rate, which would bring it close to 4%. That’s high enough to kill the economic expansion that has been floating on a sea of readily-available and cheap credit.

In response to the 2008 financial crisis, the Fed introduced quantitative easing, which boosted its assets from $900 billion to $4.5 trillion. Then with the pandemic, the central bank’s assets almost doubled to $8.9 trillion this month.

The bulk of all that money flowed into residential housing as well as stocks and many speculative financial assets. Ditto for the $3.75 trillion provided by the government in response to the pandemic.

The shift from the tsunami of central bank money to cuts in the Fed’s hoard via quantitative tightening and the end of massive fiscal stimulus is a major shock to the economy.

The recession will curb credit demand and enhance the zeal for safe-havens, all to the benefit of Treasuries. Also, the robust dollar makes US government securities attractive to foreigners, as does the fact that the 10-year Treasury note has a higher yield than the sovereign debt in 13 of 18 developed countries.

A similar lead may occur this year. Retailers are chopping orders in response to excessive inventories after incorrectly anticipating huge holiday sales at the end of 2021 to American consumers who were already saturated with goods. Consumers have since switched to spending money on services such as dining out and travel.

Some 0.8 percentage point of the 1.4% drop in real gross domestic product in the first quarter was due to inventory cuts and more will follow as the goods from Asia that are being unloaded at West Coast ports are moved inland. The backlog of vessels in the ports of Los Angeles and Long Beach dropped from 109 in January to 30 in May.

Consumers will probably continue to refrain from buying goods. Inflation-adjusted retail sales dropped in May for the 14th consecutive month. Even nominal sales dropped in May. Real hourly wages have declined for more than a year and the University of Michigan’s index of consumer sentiment plunged to an all-time low in June in data going back to the late 1970s.

Existing home sales fell in May for the fourth straight month and dropped 8.6% from a year earlier as mortgage rates rose and houses became the least affordable since July 2007, according to the National Association of Realtors. 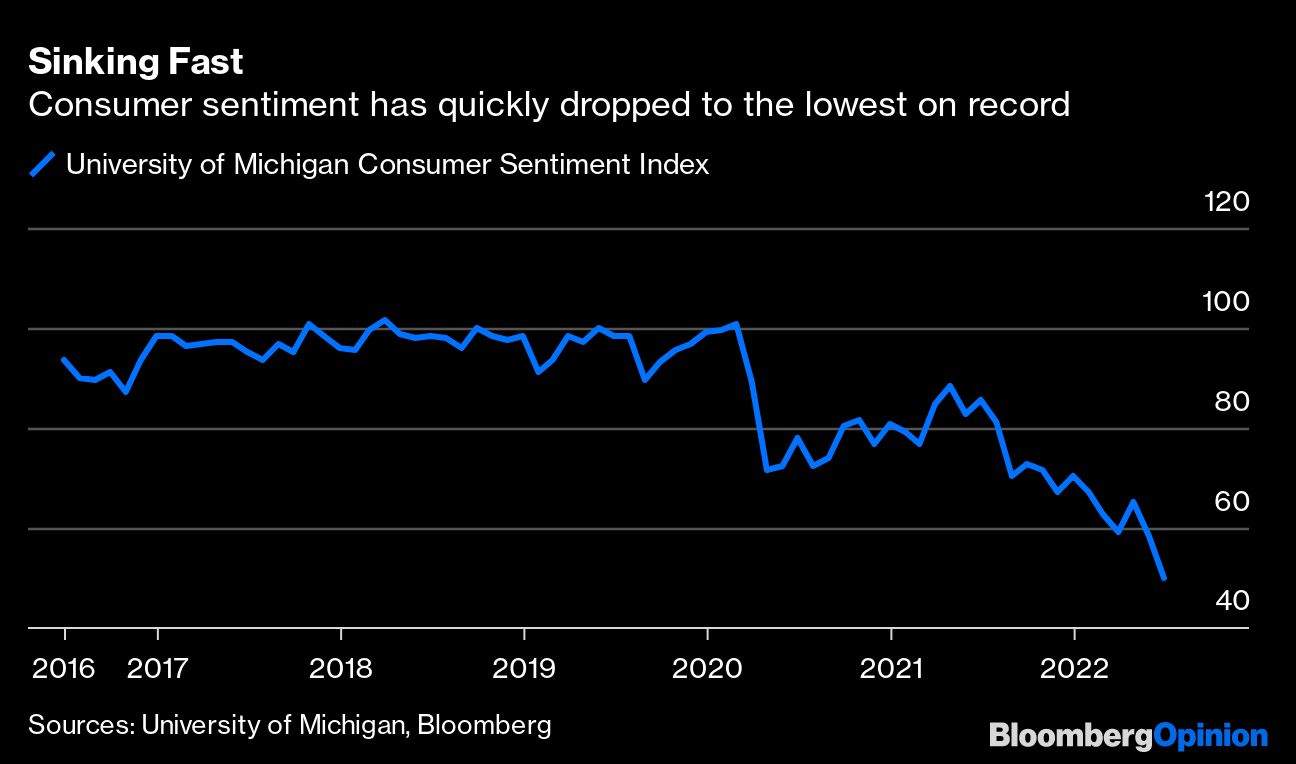 Inflation may also have peaked. The Consumer Price Index rose 1.2% in March from a month earlier and eased back to gains of 0.3% in April and 1% in May. Similarly, the Producer Price Index rose 0.8% in May, down from March’s 1.6% increase.

While fighting the serious inflation of the early 1970s, however, the central bank didn’t move from credit restraint to looser conditions until July 1974, even though the business cycle peak was in November 1973.  With the Fed now desperately trying to get ahead of the inflation cycle, it may well not reverse gears until the recession is well under way.

Of course, no one rings a bell when a business downturn commences. With all the late reporting of data and revisions, it’s often months or quarters after its start that the National Bureau of Economic Research, the recognized arbiter of recession-dating, pinpoints the business peak, and often not until after the following trough.

Gary Shilling is president of A. Gary Shilling & Co., a consultancy. He is author, most recently, of “The Age of Deleveraging: Investment Strategies for a Decade of Slow Growth and Deflation,” and he may have a stake in the areas he writes about.