The price of the Tuttle Capital Short Innovation ETF (ticker SARK) on Friday closed higher than Wood’s ARK Innovation ETF (ARKK) for the first time. In other words, it’s become more expensive to buy shares in a fund making very short-term bets against ARKK than it has to buy shares of the ETF itself.

SARK uses swap agreements with big financial institutions that are structured to deliver the inverse of ARK Innovation’s performance each day. Nonetheless it has surged more than 55% year-to-date as Wood’s main fund has lost 40% amid looming rate hikes and the war in Ukraine.

“It’s the same old bear market for growth stocks, especially for the speculative stuff,” Matt Tuttle, chief executive officer at Tuttle Capital Management LLC, said by phone. “Amazingly in four months, our share price lapped ARKK, which, if you told me when we launched this thing that we’d lap them in four months, I wouldn’t have believed you.” 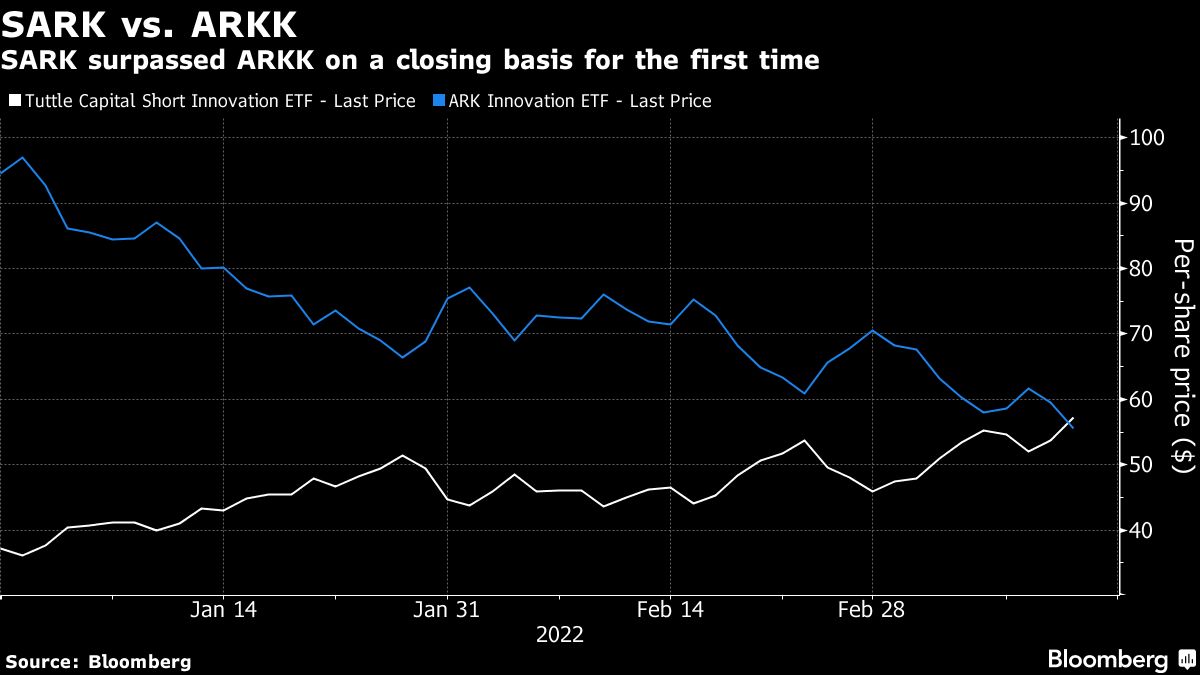 Wood’s growth-centric ETF has been hit on multiple fronts. The Federal Reserve is commencing a rate-hiking cycle likely this month, while Russia’s invasion of its neighbor has rocked commodity prices, leading to concerns that economic growth and corporate profits could slow.

“I do think it makes sense that ARKK is down so much this year. Too many of the stocks in the ARKK portfolio were dependent on central-bank liquidity to fuel their outsize gains,” said Matt Maley, chief market strategist at Miller Tabak + Co. “Now that this liquidity is being reversed, the stocks are going down in a meaningful way.”

Though ARKK has had a tough performance stretch, it’s still raking in tons of cash. The ETF has seen five straight weeks of inflows totaling roughly $1.3 billion. SARK, meanwhile, has seen two consecutive weeks of outflows.

While inverse funds are not uncommon in the ETF market, SARK last year made a splash when it launched thanks largely to its focus on just one manager.

“SARK is another aspect that’s adding to the liquidity profile of the ecosystem,” he said by phone. “Cathie Wood probably doesn’t prefer its price being below SARK’s, but we view this as part of an ecosystem, a solar system, with ARKK in the center — and all of this brings people into the ecosystem.”