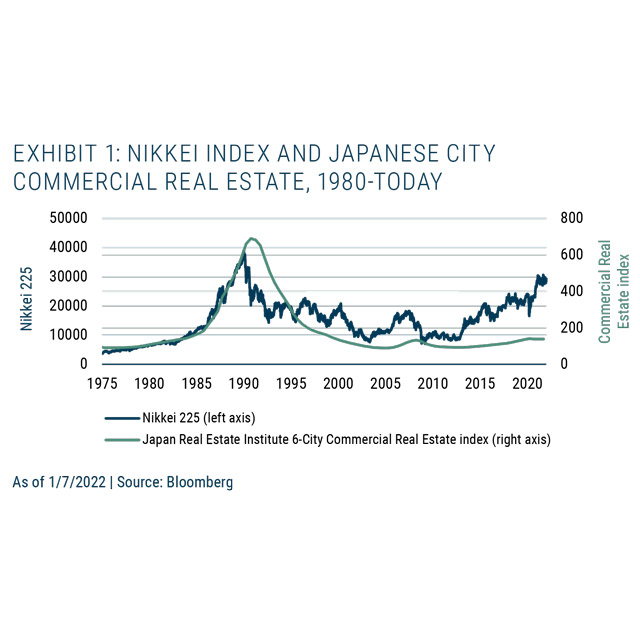 1. The dangers of having multiple asset bubbles at the same time are huge.

This graph shows the economic consequences of Japan’s double bubble, which “are arguably still playing out,” he adds. Plus, it demonstrates “that neither the equity market nor land have yet recovered their 1989 peaks!”
Close Slideshow 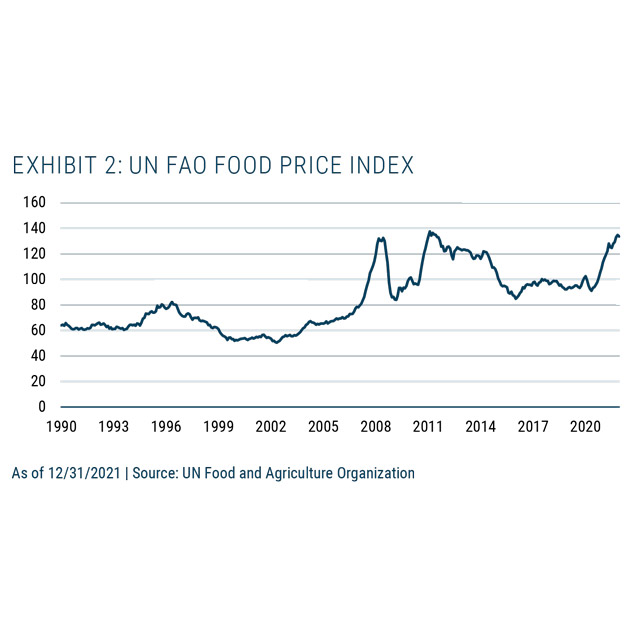 2. We have bubbles across all major asset classes and very high food prices.

First, we’re “participating in the broadest and most extreme global real estate bubble in history,” Grantham explains. Second, he says, “We have the most exuberant, ecstatic, even crazy investor behavior in the history of the U.S. stock market.”

Third, there are also “the highest-priced bond markets in the U.S. and most other countries around the world, and the lowest rates, of course, that go with them, that human history has ever seen.”

Fourth, we’ve got “broadly overpriced, or above trend, commodities including oil and most of the important metals,” as well as global food prices “at around … [and] all-time high,” Grantham points out. These high prices “push inflation and stress real incomes.”

The combination “of still-rising commodity prices with a deflating asset price bubble is the ultimate pincer attack on the economy and is all but guaranteed to lead to major economic pain,” as we saw in 2008, he explains. 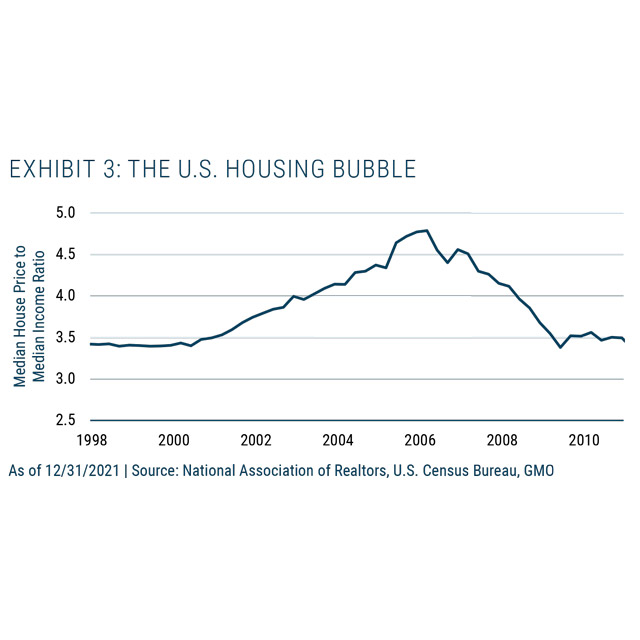 3. It seems the Fed will never learn.

“As of today, the U.S. has seen three great asset bubbles in 25 years, far more than normal. I believe this is far from being a run of bad luck, rather this is a direct outcome of the post-Volcker regime of dovish [Federal Reserve] bosses … ,” Grantham argues. “The fact is they did not ‘get’ asset bubbles, nor do they appear to today.”

In the mid-2000s, Bernanke maintained that “the U.S. housing market merely reflects a strong U.S. economy” and “has never declined.” But then we got “the best looking, most well-behaved bubble of all time (see Exhibit 3), causing profound economic damage to the U.S. and global economies,” according to the GMO expert.

As Grantham explains, “[H]ere we are again. This time with world record stimulus from the housing bust days, followed up by ineffably massive stimulus for COVID.” So far, the fallout of this approach has included “the most dangerous breadth of asset overpricing in financial history.”
Close Slideshow 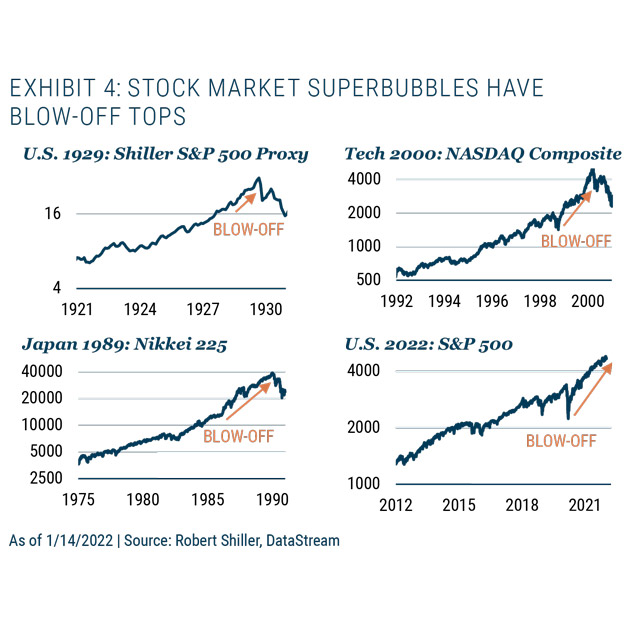 The penultimate phase of major bubbles, according to Grantham, is characterized by a “blow-off, ” which he says is "an accelerating rate of stock price growth to two or three times the average of the preceding bull market."

This pattern has appeared in 2020 "as clearly as [in] any of history’s other great superbubbles."

For instance, Grantham points to the recent meme stock madness of GameStop (ticker: GME) and AMC Entertainment (AMC), which he explains were "two companies in declining industries further decimated by COVID-19 ... [that] managed to rally 120x and 38x, respectively, from their post-pandemic lows to their 2021 highs."
Close Slideshow 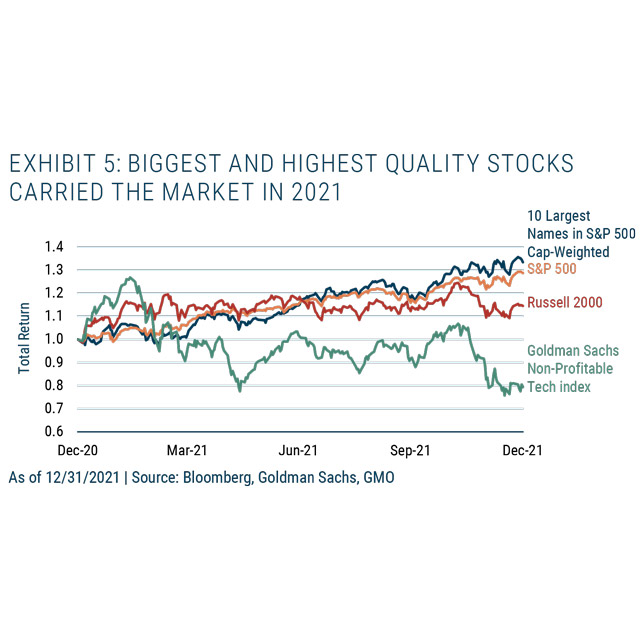 5. Here’s what happens in the “narrowing market” phase of a superbubble.

In the final “narrowing market” phase of a great bubble, Grantham explains, most of the accelerating rate of stock price growth and related developments “are now well in the past.”

In addition, in the ultimate narrowing phase, which is "unique to these few superbubbles," you see "a decreasing number of very large blue chips go up as riskier and more speculative stocks underperform or even decline," he explains. This happened in 1929, 2000 and since February 2021.

GameStop, AMC, Dogecoin, and more than one-third of all Nasdaq stocks, he points out, "are now all down more than 50% from their highs." Bitcoin is 40% or more from its highs, while battery maker QuantumScape has dropped at least 83% from its peak. "Ouch!" Grantham exclaims.
Close Slideshow 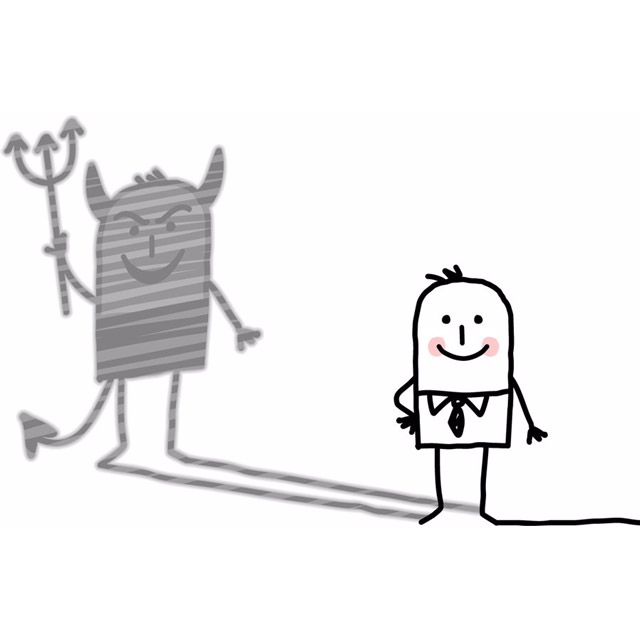 In addition, he points to a “the vampire phase of the bull market,” where we’ve been lately. That’s when investors and the Fed throw everything they have at it. “You stab it with COVID, you shoot it with the end of [quantitative easing] and the promise of higher rates, and you poison it with unexpected inflation … and still the creature flies,” Grantham explains.

But, just as you start to think “the thing is completely immortal, it finally, and perhaps a little anticlimactically, keels over and dies,” he concludes. “The sooner the better for everyone.”
Close Slideshow 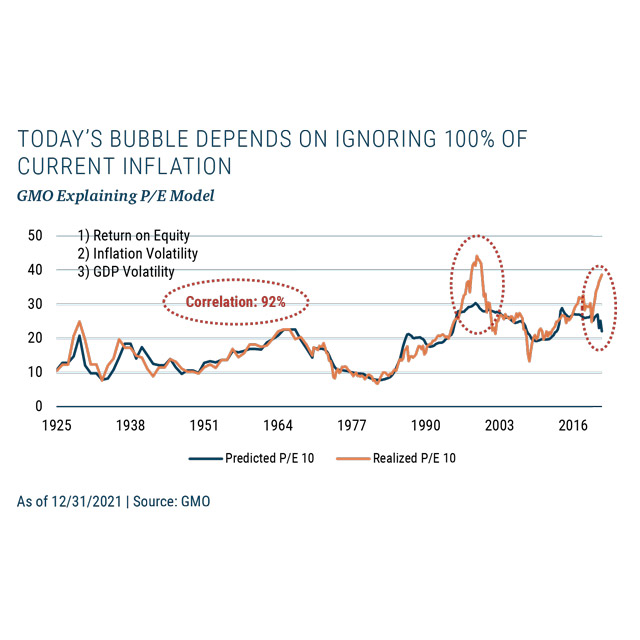 Inflation surges, tracked by data since 1925, "had always hurt multiples badly … until now," he explains. And while he concludes that "inflation is 100% ignored … for now," he implies that the market can't continue to do so. 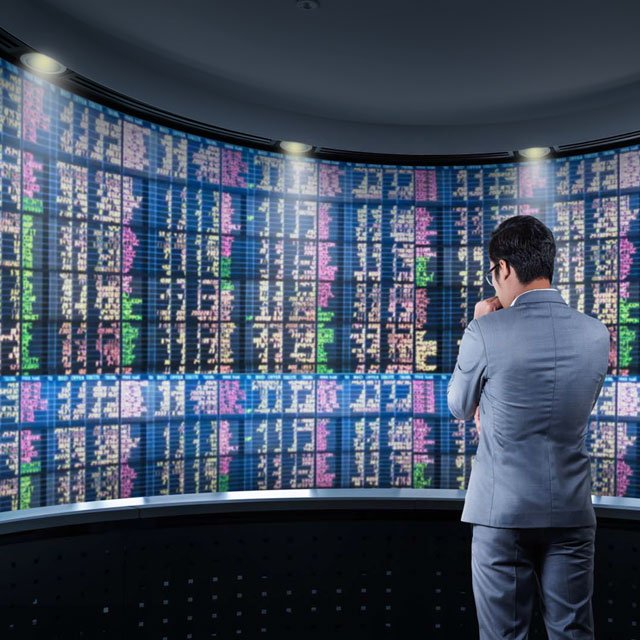 8. How to make money and reduce risk


GMO's overall approach, Grantham says, is "to avoid U.S. equities and emphasize the value stocks of emerging markets and several cheaper developed countries, most notably Japan. ... I also like some cash for flexibility, some resources for inflation protection, as well as a little gold and silver." He's avoiding cryptocurrencies.

The GMO playbook in some portfolios, according to GMO partner and portfolio manager Matthew Kadnar, has been to reduce equity, focus on non-U.S. value holdings and alternative strategies, pursue a 20% “equity dislocation” strategy, and hold a modest amount of fixed income — no Treasurys and only specialized credit.

Its dislocation strategy, which is designed to profit from a bubble bursting in growth holdings, seeks high total return by investing in “attractively valued equities while correspondingly shorting equities where we believe that valuations are reflective of implausible growth expectations,” explains Ben Inker, co-head of Asset Allocation at GMO. (Image: Shutterstock)
Close Slideshow

Related: Harry Dent’s Stock Market Predictions: How Did They Turn Out?

“Today in the U.S. we are in the fourth superbubble of the last hundred years,” wrote GMO co-founder Jeremy Grantham, in a note to investors Thursday.

In the note, Grantham and his colleagues laid out what it means to be in a “superbubble,” why were are in one that’s rapidly losing air, and what asset manager GMO has been doing about it.

“One of the main reasons I deplore superbubbles — and resent the Fed and other financial authorities for allowing and facilitating them — is the underrecognized damage that bubbles cause as they deflate and mark down our wealth,” he explained.

In general, an equity bubble starts to deflate “from the riskiest end of the market first — as it has been doing since last February,” according to Grantham. “So, good luck! We’ll all need it.”

As of early Monday, the Nasdaq was down 13% year to date, the S&P 500 about 8% and the Dow Jones Industrial Average roughly 6%.

Grantham admits that “no one wants to hear the bear case” about bubbles, because it’s “the worst kind of party-pooping.” Bubbles and especially superbubbles “are often the most exhilarating financial experiences of a lifetime,” he notes.

And while he doubts “speculators in the current bubble will listen” to him, Grantham says, “giving this advice is my job and possibly the right thing to do.”

See the slideshow above for Grantham’s look at why we’re in a superbubble and what he and GMO see as the best way to respond.

And “for distracted readers,” he provides the following summary of “bubble rules.” Sigma is how GMO measures deviation from the mean.