Readers of this periodical are aware that pension risk transfer (PRT) is a process through which a company can transfer, for a price, the responsibility — financial, administrative, or both — of their defined benefit pension plan(s) to a third party, through the purchase of a group annuity. PRT deals are maintaining a hefty pace as companies look for new ways to manage these plans. Simply put, PRT is hot right now. Further, I’d make the argument that while it may be less obvious amid all this action, PRT can be a tool for broader economic benefits.

Facing fundamental changes in employment and companies’ own shifts to defined contribution plans, we now see many plans as legacies of past times.

Enter PRT, which has been gaining momentum even as the global economy reverberates from the shock of this year’s COVID-19 pandemic. Let’s look at some key moments in PRT leading up to this year, and then we’ll dive deeper into why it’s going to be an even more important tool in the coming years, even decades.

The PRT market in the U.S. started to kick off in earnest in 2012 with the GM and Verizon deals, for a combined total of $36 billion. From that year on, the market has continued to grow. In 2019, the transfer of pension obligations to domestic life insurers through buy-ins and buyouts amounted to $30 billion, the highest total since 2012. In 2019, two of the largest deals in the U.S. were Baxter International Inc. which transferred $2.4 billion in U.S. pension plan liabilities and Lockheed Martin, which secured a $1.9 billion buyout. Meantime, Bristol-Myers Squibb Co. transferred the remaining $200 million of a $3.8 billion buyout announced in 2018. In the U.K. activity continued apace, with some £40 billion in PRT deals getting completed, including our own £4.6 billion Rolls-Royce buyout, and the continuation of our ICI buy-in, which including our most recent transaction, to date adds up to £5.8 billion.  We may see a somewhat smaller market this year, but we’d attribute that more to the COVID-19 pandemic than to any winding down of the need for this type of transaction.

What is making PRT so attractive, even in the middle of a pandemic? As briefly explained , a number of slow-burning cultural and economic shifts are changing the value of pensions for everyone involved. For many employers, traditional defined benefit pension plans are becoming increasingly hard to maintain; for some companies, they have become unanticipated burdens requiring continued additional funding together with administrative time and effort; in other cases, ownership of those companies may have changed one or more times since the original plan was put into place. Some pensioners who are currently in their 80s started work in the 1960s or even the 1950s, since which time their companies and retirement benefits have gone through countless changes.

Beyond this, however, is much broader opportunity to effect change. Importantly, in transferring that risk to an insurer, a company is not only achieving the sum of the parts of the deal — the offloading of risk for a price. Rather, in undertaking these transfers, the involved parties have the opportunity to fund some of society’s most pressing needs, today.

The COVID-19 pandemic has, for many, been a wake-up call to the systemic issues facing our society. For others, these inequalities have always been apparent. As jobs become scarcer and health care more critical, it’s increasingly difficult to hide society’s chronic underinvestment in minorities, education, and neighborhoods. According to some estimates, finding a way to change that trajectory is only going to get harder in the post-pandemic climate, at a time when it most needs to change. COVID-19 will shrink the U.S. economy by around $8 trillion in the coming decade, according to a Forbes report on recent projections by the Congressional Budget Office. Government spending in June 2020 reached $864 billion more than revenue — 100 times the $8 billion gap reported in June 2019, one year ago.

It doesn’t take an economist or lawmaker to guess that any long-term investments will be put on the back burner in the face of the immediate need to get the economy back up and running. And already we’re seeing the signs: over 700 U.S. cities plan to cancel or postpone infrastructure projects due to lack of funds, many have cut seasonal programming such as summer jobs and camps for at-risk youth, and nearly a quarter have reduced their spending on community and economic development programs.

In the face of these losses, I believe that the money pouring into PRT can help fill some of the gaps, and in particular, should be invested in long-term assets with good credit and high returns that can be both socially as well as economically useful. While these funds can’t (and shouldn’t) replace cut budgets for current expenditures such as social programs or kids’ summer camps, ultimately, the invested funds can be put to meaningful, long-term use that will benefit the broader citizenry.

These deals offer an alternative source of funding when, and in fact where and how, it is most needed. With PRT providers willing to invest for the long term and accepting long-term returns, these deals will be able to provide the kind of secure and steady cash flow necessary for paying pensions. We have been working with this model in the UK, as two recent transactions demonstrated—the above-mentioned risk transfer of Rolls Royce’s pension plan, and a major long-term infrastructure investment in Oxford to invest approximately the same amount in building affordable housing and educational facilities.

Similarly, in April 2020, we invested $188 million in pension risk transfer funds to reinvigorate Sheffield, whose new West Bar Square development will provide 350 ‘build to rent’ homes, office space for 1,800 workers, a multi-story car park and landscaped public spaces. Other cities where we’ve invested in similar projects include Bristol, Cardiff, Salford and Newcastle-on-Tyne, whose Helix project aims to become a major hub for scientific research and technology businesses, creating local jobs for future generations. Local jobs translate to a demand for housing, retail and other services, creating further economic growth. We believe the same can be achieved here in the U.S., where many smaller cities that have suffered from underinvestment could be primed for an economic comeback.

PRT deals are flexible, encompassing a wide range of sizes and possible applications, and insurers can bring long-lasting value to society by investing the transferred assets with inclusive, forward-looking goals in mind. The potential benefit of PRT is therefore a three-way virtuous cycle: de-risking for companies, long-term security for pensioners, and broad social and infrastructure gains for society. 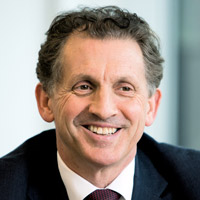 Nigel Wilson is group chief executive of Legal & General. In 2015-2016, he was a member of the Prime Minister’s Business Advisory Group.