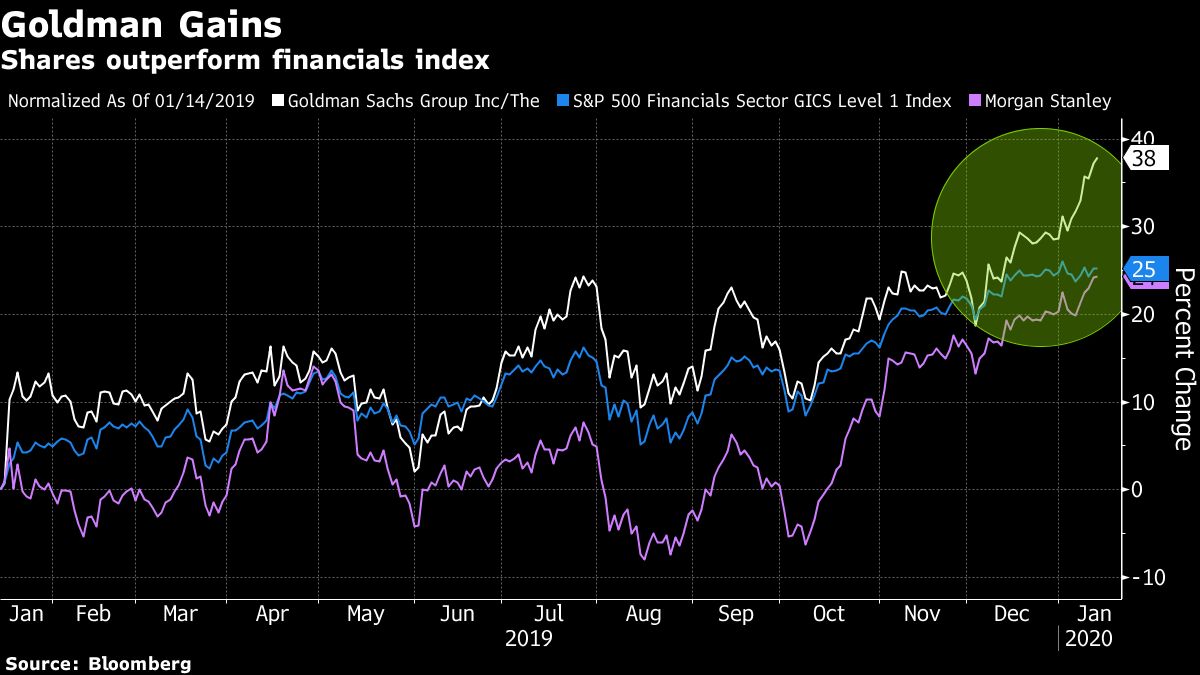 “We view these results as a positive read-through,” UBS analyst Eric Wasserstrom wrote in a note. Implications for equities were less clear, but both Goldman and Morgan Stanley should “react well to these prints,” he said.

Bloomberg Intelligence’s Alison Williams concurred, adding that expectations were higher for Bank of America Corp. as well. “FICC growth was helped by easier comparisons with a weak fourth quarter 2018 and exceeded equities trends,” she wrote. That was “anticipated and similar to Jefferies’ results,” she said, and added that advisory fees also topped estimates.

JPMorgan and Citigroup shares rallied on Tuesday after their earnings beats, and as their CEOs hailed a strong U.S. consumer. Goldman rose as much as 1.4% to the highest since April 2018, Morgan Stanley climbed 0.9% to the highest since May 2018, and BofA, which is due to report on Wednesday, was up about 0.2%.

Dimon said that American consumers continue “to be in a strong position,” and flagged a “robust holiday season,” which boosted card sales volumes 10%. Dimon added that “global growth stabilized, albeit at a lower level, and resolution of some trade issues helped support client and market activity towards the end of the year.”

JPMorgan shares climbed 2.6%, the most since mid-December.

Wells Fargo, on the other hand, tumbled 4.8%, the most since December of 2018, after the bank’s adjusted earnings per share missed estimates and its results included $1.5 billion of “litigation accruals for a variety of matters, including previously disclosed retail sales practices matters.” The bank also forecast net interest income would drop low-to-mid single digits in 2020.

“Wells Fargo is a wonderful and important franchise that has made some serious mistakes, and my mandate is to make the fundamental changes necessary to regain the full trust and respect of all stakeholders,” new CEO Charlie Scharf said.

How Advisors Can Comply With FINRA's Stricter Fixed Income Governance

He said the bank’s cost structure was “too high” and it should be able to increase its rate of growth, but it was “too early to put time frames around these goals.”

The bank’s big miss was disappointing even with better-than-expected loan growth, “although there is clearly an element of kitchen-sinking,” Atlantic Equities analyst John Heagerty wrote in a note.

Net interest margin, or NIM, compression of 12 basis points in the quarter was worse than expected; non-interest income was “hit by lower market sensitive revenues,” and expenses were higher than expected due to rising IT costs and a software impairment, he added.

Vital Knowledge Media founder Adam Crisafulli, who used to work for JPMorgan, injected a note of caution, saying in a note that JPMorgan’s “results were blowout on the surface with big upside” on revenues and EPS. But, he added that “most of the beat was driven by FICC … and people will question the sustainability of that number.”

“In most of its lines of business, Citigroup plodded along in the fourth quarter, with a decent, if unremarkable performance,” he wrote. “However, it was the bank’s fixed-income trading group that really carried the day, buoyed by interest-rate cuts by the Fed last quarter. It is hard to see how that will be reproduced in the coming quarters.”

Atlantic’s Heagerty called JPMorgan’s results solid, but since the “beat mainly came from the more volatile P&L components,” executive comments about the outlook would be “more important than usual.”

He flagged “mild” net interest margin compression and “healthy” deposit growth, and added that provisions were slightly better than expected due to net reserve releases of $150 million, but “net charge-offs were slightly worse due to select downgrades in Commercial Banking.”

Wolfe Research analyst Steven Chubak piled on to those flagging less-than-spectacular results for JPMorgan, saying “while today’s results reaffirm the strength of the franchise (particularly in CIB), and could help boost shares, we see better relative value in peers with heavier Capital Markets gearing,” such as Goldman Sachs and Morgan Stanley.

Investors are focused on forecasts along with quarterly results as banks have under-performed the broader market so far this year. After soaring by nearly a third last year, the KBW Bank Index has slipped 0.8% so far in January compared with a 1.7% rally in the S&P 500.

How Advisors Can Comply With FINRA's Stricter Fixed Income Governance