Household debt in the U.S. has been steadily increasing every quarter for the last five years, and is now $1.2 trillion higher than the previous peak in the third quarter of 2008.

In its latest quarterly report on household debt and credit, the Federal Reserve Bank of New York reports that total household debt increased 1.4%, to $13.86 trillion in the second quarter of 2019.

Mortgage debt — the single biggest component of household debt — rose  $162 billion in the second quarter to $9.4 trillion, surpassing the $9.3 trillion reached in the third quarter of 2008.  Mortgage originations, which include mortgage refinances, also rose, increasing $130 billion to $474 billion, the highest volume seen since the third quarter of 2017.

“Mortgage delinquencies and the average credit profile of mortgage borrowers have continued to improve,” said Wilbert van der Klaauw, senior vice president at the New York Fed, in a statement.

That was not the case for student loan, credit card or auto debt.

The share of student loan debt — the second largest component of household debt at $1.48 trillion — that is 90 days or more delinquent rose to a 9.9% annualized rate from 9.4% in the first quarter. Moreover, the actual delinquency rate is likely twice as high because the reported rate excludes loans in deferment, in forbearance or in grace periods, which are therefore not  included in the repayment cycle, according to the New York Fed.

The delinquency rate for auto loans fell slightly in the second quarter to 2.34% but auto debt designated as “severely derogatory”— which includes debt in any stage of delinquency paired with a repossession, foreclosure, or removed from the lender’s books — now accounts for 21% of outstanding auto loans, which is historically high and a result of the increasing volume of subprime loans over the past five years, according to the New York Fed.

The “severely derogatory” student loan debt rate was even higher, at 35%, a rate that has “grown stunningly since 2012,” according to the New York Fed.

Credit card debt card balances transitioning into 90+ day delinquency have been rising since 2017, and rose to 5.2% in the second quarter. 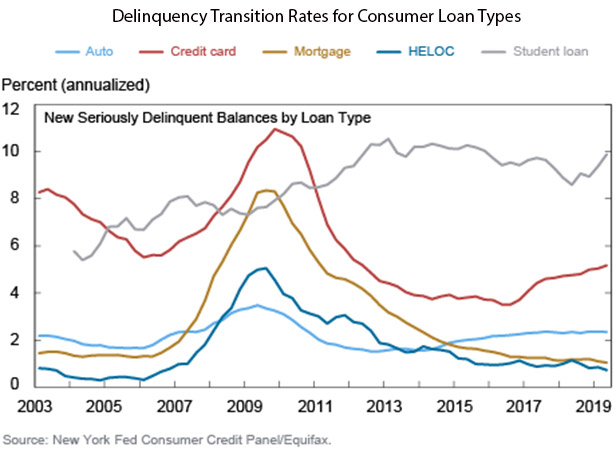 Although the aggregate delinquency rates improved in the second quarter of 2019, two-thirds of the $604 billion of delinquent debt was seriously delinquent — 90 days or more overdue.