The 2019 Broker-Dealer Presidents Poll: Best of Times, Worst of Times

Independent broker-dealers are in the spotlight.

Advisor Group just announced that Reverence Capital Partners is buying a majority stake in the IBD network; reports circulated that an earlier suitor had offered it more than $2 billion.

Advisory work appears to be the darling of investors, with this news being followed by talk that Goldman Sachs is trying to buy United Capital. What’s attractive to private equity and other investors?

But with success comes the need to produce better and better results, do more/spend more and the like. As BNY Mellon Pershing Advisory Solutions CEO Mark Tibergien explained in his April column for this publication, “The Growth Dilemma”: “‘When you stop growing, you start dying.’ For many advisory firms, this pithy saying [from writer William Burroughs] has become reality. While market lift may be giving the illusion of double-digit growth, real growth from new clients or new assets for the average firm is under 5%.”

These business demands, along with bumpy markets and the expected Securities and Exchange Commission’s Regulation Best Interest (set to be released in the next month or two), are straining IBD managers and advisors, who have to keep up with all this change while serving clients. To better grasp the significance of these issues, we polled about 40 executives, who gave their frank views on what troubles them most today.

When it comes to the biggest industry headaches, compliance tops the list. More than half, 52%, of IBD leaders say that the need to do more and spend more on regulatory issues and compliance is the No. 1 concern that keeps them up at night. Plus, a bigger majority of them — 79% — believe that dealing with compliance demands prevents their affiliated advisors from having a good night’s rest.

Concerns over compliance spending exist across the industry. Of 800 global financial-services firms, 66% told Thomson Reuters last year that they expected the cost of senior compliance staff to increase, up from 60% in 2017. In addition, almost two thirds (61%) anticipated their total compliance budgets to be somewhat or significantly larger than in the prior year (up from 53%).

A big part of current compliance concerns — beyond Reg BI, which aims to stop commission-based brokers from putting their interests ahead of clients’ interests — is cybersecurity. Almost all BD leaders, 98%, polled say this is their No. 1 tech-related worry. It’s followed by the need to educate advisors and clients on the use of technology, 72%, and the ability to integrate BD technology with that of other organizations, 56%.

Kestra Financial, for instance, just began working with cybersecurity-software maker Entreda, so that any and all risks get shared with the IBD’s home office. The aim of the tie-up is “to complement, not replace, existing antivirus, anti-malware or encryption software,” according to the 1,800-advisor strong broker-dealer. “Through its implementation, the technology team has identified and addressed more than 2,000 unique vulnerabilities.”

Other concerns for IBD execs include losing top-performing advisors to RIAs and others, coping with fee compression and industry consolidation, and helping registered reps better serve investors. To address these issues, lots of firms are hiring and/or tinkering with leadership.

Ballard’s resume includes time with Docupace Technologies, Cetera Advisor Group (when it was owned by AIG), SunAmerica Mutual Funds and AIG Retirement Services. And Raymond James just promoted Kim Jenson from COO of its employee channel to COO for its broader Private Client Group; she was recruited from UBS in 2017 as a 30-year industry veteran.

The Financial Industry Regulatory Authority issued its risk monitoring and exam priorities for 2019 in January, highlighting new matters as well as ongoing issues like cybersecurity and firms’ hiring of brokers with former infractions.

“There is no one-size-fits-all approach to cybersecurity, so FINRA has made a priority of providing firms with reports and other tools to help them determine the right set of practices for their individual business,” Steven Polansky, senior director, member supervision in FINRA’s Washington, D.C., office, said late last year when the group released its cyber report.

In early May, FINRA proposed a plan to restrict BDs that hire brokers with a history of misconduct, including a requirement that such firms have a fund to cover unpaid arbitration awards. (The group is seeking comment on the proposal, Rule 4111, through July 1).

As for the SEC’s Reg BI plan, broker-dealer leaders seem to have mixed feelings. While more than two-thirds, or 68%, say the regulation will cause confusion and challenges, only about a third, 36%, say it will significantly affect business.

Meanwhile, BD execs hope individual states that have worked to enact their own rules — New Jersey, New York, Maryland and Nevada — will hold off until the SEC finalizes its fiduciary-related proposal. “There’s a lot of concern with what’s happening and all those changes,” said Raymond James Chairman and CEO Paul Reilly.

“We’re going to wait for best interest to come out and then find out what all the states … do — either through talking with them or through the courts — to uphold a federal standard,” Reilly explained.

In this year’s Presidents Poll, 94% of BD execs say states considering their own fiduciary/best interest proposals should wait for the SEC’s Reg BI to be finalized before taking action. In terms of FINRA’s own suitability rule, most industry leaders, 59%, are unsure if this regulatory group should bow out of this regulatory area when the SEC completes Reg BI.

Robert Colby, FINRA’s chief legal officer, said in late March, that after Reg BI is finalized, it will “look to see first, is there anything different between our [suitability] rule and the way it [Reg BI] comes out? We’ll fix that. We’ll also look to see if there’s any reason to continue to have a separate suitability rule, because we’ll be enforcing Reg BI, and we don’t want to be inconsistent in any way.”

The need for BDs to finance greater spending on multiple fronts is revealed in this year’s poll. Executives say they plan to spend more on technology, 95%; compliance, 85%; business growth and related areas, 83%; fee-based work, 81%; and deal-making and adding advisors, 78%. 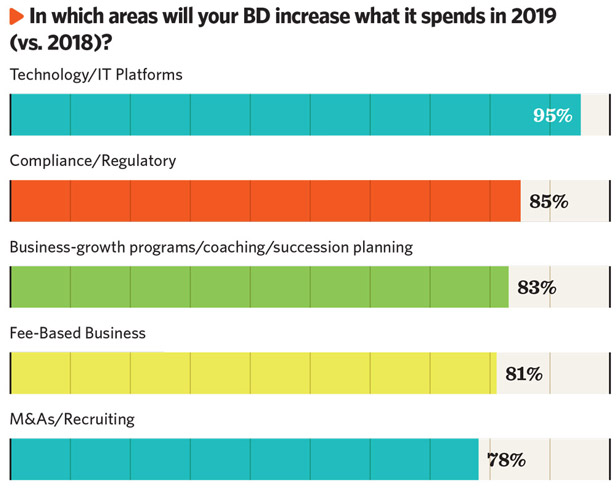 Advisors are spending more, too, according to a recent BNY Mellon Pershing survey of top advisory firms: 80% plan to boost what they pay out for technology. More than a third, 35%, are doing so to create a better experience for clients, and nearly 30% want to improve efficiency.

As firms spend more to fuel business growth and remain compliant, they are getting creative in how they finance these priorities. Commonwealth Financial Network, for instance, formed a stand-alone technology company earlier this year, Advisor360, and struck its first licensing deal with Massachusetts Mutual Life.

According to Commonwealth CEO Wayne Bloom, the agreement will let the BD “accelerate the pace of our software development and ensure that our advisors’ tools remain on the cutting edge of what today’s — and tomorrow’s — top financial advisors need to thrive.”

Mobile technology, which more than two-thirds of BD leaders say they plan to spend more on in 2019, is of particular importance for investors. Research firm J.D. Power argues that this focus is both timely and critical.

If BDs can act fast, “There’s really an opportunity to create a much better client experience but also to save significant costs by moving much of the transactions from the branch or office, where there’s a human interface” to an app, he added.

“Clearly, the level of investment in wealth management around mobile is not nearly as large as it is in some other industries … ,” Foy explained. “But the cost for good mobile app support — relative to overall spend on marketing and client experience — is really not that huge.”

As for Bitcoin- and Blockchain-related developments, most BDs plan to stay on the sidelines. One executive, though, says it will move to help advisors offer ways to invest in cryptocurrencies and digital assets if/when their clients request access to these products.

When asked about President Donald Trump’s impact on the financial markets in April and early May, more than two-thirds, 72%, of BD leaders say it has been positive. Just under two-thirds, 61%, believe Trump also has been good for their businesses.

It’s worth pointing out that the IA survey took place right before market volatility in mid-May tied to U.S.-China trade tensions. May 13, for instance, saw the major equity indexes fall about 2%. Plus, the U.S. is ratcheting up sanctions on Iran and deploying more military resources to the Middle East.

When it comes to interpreting Trump’s frequent tweets and statements on the market, “Anybody that thinks that they can divine what’s going to happen here, that’s just guessing,” Liz Ann Sonders, Charles Schwab’s chief investment strategist, told Bloomberg.

Executives also gave their views on the fake-accounts and other scandals at Wells Fargo, which recently tapped interim CEO Alan Parker to replace departing CEO Tim Sloan. The bank, which is operating under restricted asset growth and other measures imposed by the Federal Reserve, plans to name a new leader from outside its own ranks.

More than half, 53%, says Wells Fargo’s behavior has damaged the general image of financial-service firms. But slightly less than half, 44%, believe the wirehouse’s tainted activities have benefited indie advisors and IBDs.

The scandals certainly affected recruiting and retention. Since the bank’s fake-accounts scandal erupted in the fall of 2016 — when it had 15,086 registered reps — Wells Fargo’s wealth unit has lost 1,258 advisors. Plus, the business is in the process of selling its retirement-plan operations.

Headlines about BD troubles and market motion come and go, of course. Overall, are BD executives feeling good about the long-term health of the indie model? A supermajority, 93%, say they are.

Private-equity attention on the sector could be part of this positive outlook. “The smart money, if you will, is focused on its fiduciary responsibility to smart investors and has been very interested in this industry. There’s a strategic rationale, with retirement assets predicted to grow three times GDP in the next few years,” said Advisor Group CEO Jamie Price, after its announced deal with Reverence Capital.

“Our [independent] segment is taking market share from the employee channel, and [the indie segment’s] exponential growth … is unusual,” he added. “The smart money is saying this is a great industry, and that’s why private equity is so enamored with it — which is good for advisors and good for us … And the best is yet to come.”