Despite a strong recovery in U.S. stock and bond markets in the first quarter, many publicly traded U.S. asset managers suffered net outflows in assets and declines in revenues and earnings.

A Moody’s survey of 14 asset managers showed that total long term net flows rose 0.43% in Q1, but excluding BlackRock they fell 0.19%. At the same time the average assets under management for the group rose 8.9%.

“This was the best flow quarter for the surveyed group since Q1 2018 but was still underwhelming,” writes Dean Ungar, senior analyst at Moody’s.

They reflect in large part asset flows in the broader financial markets. According to the Investment Company Institute, actively managed U.S. equity funds experienced $27 billion in outflows in the first quarter, and domestic equity ETFs – primarily passive index funds – had inflows of just $5.3 billion. Bond market flows were also positive in the first quarter for actively managed mutual bond funds (up $79 billion) and for bond ETFs (up $33.5 billion).

T. Rowe Price was the only asset manager other than BlackRock that experienced positive net inflows as a percentage of AUM for the previous five quarters, and its first quarter inflows even surpassed BlackRock’s — up 1.14% vs. BlackRock’s 1.03%. 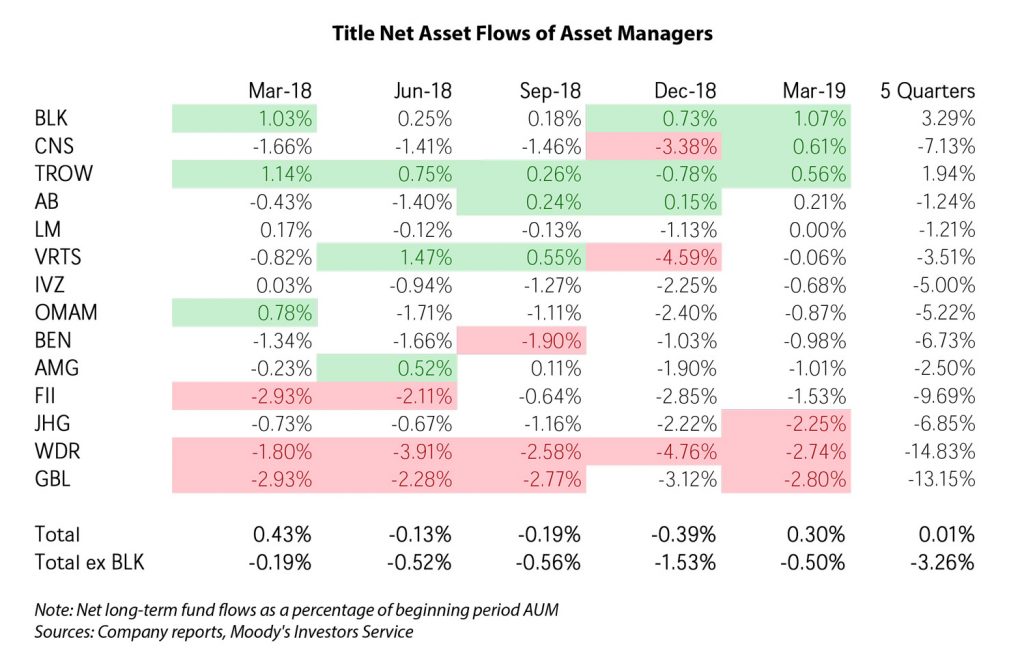 The biggest losers in terms of net asset flow for the first quarter and the previous five quarters were Federated Investors, Waddell and Reed and Gamco Investors.

Waddell and Reed saw $1.1 billion in outflows from its retail broker-dealer channel and $437 million from its retail unaffiliated distribution panel in the first quarter, which was its 19th in consecutive net asset flow declines.

Revenues also fell for most asset managers in the first quarter compared to the fourth; year-over-year revenues were down 8.3%. Excluding BlackRock, the decline was 9% compared with a year ago.

The revenue drop reflected flat asset growth over the past year as well as lower fee rates and performance fees, according to Moody’s. It expects a pickup in revenues in the second quarter but not one big enough to register a year-over-year improvement.

Contribution to the revenue decline were fee rates, which fell 5.2% year-over-year overall (5.1% excluding BlackRock) and 1.6% from the fourth quarter.

That disparity is “falling in line with our expectations that larger managers will continue to flourish and smaller managers will struggle to sustain higher margins,” according to Ungar.