The International Monetary Fund cut its outlook for global growth to the lowest since the financial crisis amid a bleaker outlook in most major advanced economies and signs that higher tariffs are weighing on trade.

The world economy will grow 3.3 percent this year, down from the 3.5 percent the IMF had forecast for 2019 in January, the fund said Tuesday in its latest World Economic Outlook. The 2019 growth rate would be the weakest since 2009, when the world economy shrank. It’s the third time the IMF has downgraded its outlook in six months.

“This is a delicate moment” for the global economy, Gita Gopinath, who recently became the IMF’s chief economist, said at a press briefing in Washington. A projected pickup in growth next year is precarious, she said. 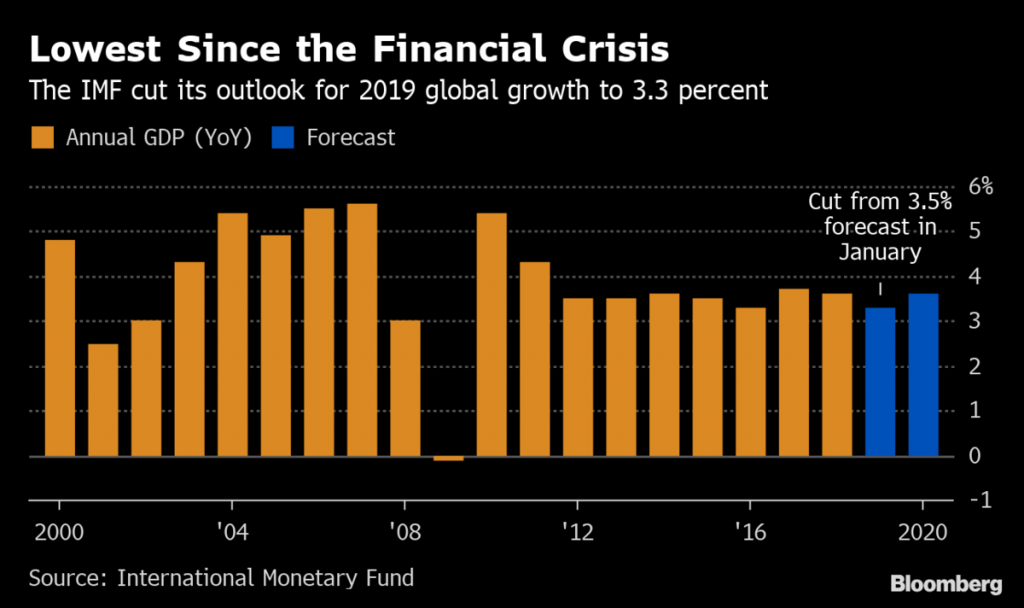 The global volume of trade in goods and services will increase 3.4 percent this year, weaker than the 3.8 percent gain in 2018 but reduced from the IMF’s January estimate of 4 percent, the fund’s report showed.

Global economic growth will recover in the second half of this year, before plateauing at 3.6 percent from next year, according to the Washington-based fund. A series of encouraging developments have boosted optimism about the world economy in recent weeks, including the decision of the Federal Reserve to put interest-rate hikes on hold and encouraging data from China’s manufacturing sector and the U.S. job market.

Still, the IMF is warning that risks are skewed to the downside, with a range of threats menacing the global economy, including the possible collapse of negotiations between the U.S. and China to end their trade war, and the departure of Britain from the European Union without a transition agreement, known as the “no-deal” Brexit scenario.

“Amid waning global growth momentum and limited policy space to combat downturns, avoiding policy missteps that could harm economic activity needs to be the main priority,” the IMF said.

Trump Urges Fed to Cut Rates, Blames It for Slowdown

IMF Managing Director Christine Lagarde is warning that the world economy faces a “delicate moment” as finance ministers and central bankers prepare to gather in the U.S. capital this week for the spring meetings of the IMF and World Bank.

While intense trade talks between the U.S. and China have raised expectations of a lasting truce between the world’s two-largest economies, analysts remain worried about the strength of the global economy, a decade after the financial crisis. Lagarde said last week the fund doesn’t anticipate a recession in the near-term.

The fund cut its forecast for U.S. growth to 2.3 percent this year, down 0.2 percentage point since the IMF’s last global outlook in January. The downgrade reflects the impact of the partial government shutdown that ended in January, as well as lower-than-expected public spending. The fund upgraded its U.S. forecast next year to 1.9 percent, up 0.1 percentage point, on the Fed’s shift to a more patient stance on interest rates.

The IMF slashed its outlook for the euro area to 1.3 percent this year, down 0.3 point from three months ago. Growth is expected to be softer in several major European economies, including Germany, where weak global demand and tougher car-emission standards have hit factory production. Weak domestic demand and high sovereign-debt spreads have dimmed Italy’s outlook, while street protests in France weighed on growth, the fund said.

The IMF cut its outlook for U.K. growth to 1.2 percent this year, down 0.3 point from three months ago.

The IMF raised its forecast for Chinese growth by 0.1 point to 6.3 percent this year, while lowering its projection for growth in Japan by 0.1 point to 1 percent. The fund cut its outlook for India’s growth this year to 7.3 percent, down from 7.5 percent in January.

Trump Urges Fed to Cut Rates, Blames It for Slowdown