The 3 Stages of Widowhood, and How Advisors Can Help

Kathleen Rehl tells ThinkAdvisor how to help widows move forward financially — and how to avoid getting fired.

New widows need “financial triage”: They’re traumatized, grieving, stricken with muddled thinking — and worried sick that they’ll outlive their money. They are in the first of three stages of widowhood, and the financial matters to be addressed in each are significantly different, says Kathleen Rehl, a leading expert on the subject, in an interview with ThinkAdvisor.

The newly widowed woman feels deeply insecure about her financial future. Thus, she needs an advisor with patience and compassion, not only technical proficiency, argues Rehl (www.Kathleenrehl.com).

Up to 70% of widows fire their financial advisors after the death of their husbands, according to a widely reported 2011 Spectrem Group research study, “Wealthy Women Investors.” Maybe that’s because the FAs bombard them with financial jargon they don’t understand and fail to listen to their deepest concerns.

Rehl has not only researched and analyzed widowhood; she’s experienced it herself. Husband Tom, a pastor, died of cancer 12 years ago, two days before Valentine’s Day. She’d just turned 60.

Rehl divides widowhood into three distinct stages: Grief, Growth and Grace. Above all, advisors must recognize the widow’s overarching need: to feel safe and secure about her financial future.

Author of “Moving Forward on Your Own: A Financial Guidebook for Widows” (Rehl Financial Advisors, 2010; paperback 2018), written for professionals to give to widowed clients, Rehl is a former 17-year FA with her own firm. Five years ago, she sold the practice to focus full time on helping advisors help widows.

In the interview, Rehl discusses the three stages of widowhood and how advisors can work best with women during that journey. Broadly, this requires superior listening skills, a high level of empathy and knowing how to correctly pace the financial planning process.

Before becoming an advisor, Rehl, who is a faculty member of the Sudden Money Institute, was a university professor teaching education.

In her practice, highly aware that holidays are sad for widows, Rehl, at Valentine’s Day, held a “ladies-that-don’t-have-hubbies-to-hug” event — as she puts it — at which the women would talk about Valentine’s Days past and do a bit of financial planning to boot.

ThinkAdvisor recently interviewed Rehl, on the phone from her office in St. Petersburg, Florida. She discussed the best approach to serving widows, as well as furnished critical advice for the woman alone based on one personal bitter dating experience.

THINKADVISOR: What are the three stages of widowhood, and how can financial advisors help during each one?

KATHLEEN REHL: No matter what stage she’s in, the widow wants to feel financially secure. In the first stage, “Grief,” the main thing advisors can do is financial triage. The widow needs to be heard and understood because it’s such a very vulnerable time and one when she shouldn’t make any major decisions.

Don’t [immediately] invest her life insurance benefits because she really doesn’t know what she needs that money for. She hasn’t had time to think out what her life is going to look like. She’s just living day by day.

What should the advisor focus on, then?

The widow’s immediate needs and making sure the bills are paid, doing estate settlement work, looking at cash flow. You’ll do a broad-brush overview of where the assets are. Often the widow doesn’t know where her investments are or why they’re there. So you’re looking at where things are, but you’re not moving things around.

You call Stage 2 “Growth.” What services should the FA provide?

General planning. This is when the widow’s cognitive functioning has normalized and she’s thinking OK again. She’ll probably be finishing up those things she started at the end of the “Grief” period. Here, the advisor is doing basic estate planning, looking at her investments and tax rates for pre- and post-retirement.

How long does it take to progress from “Grief” to “Growth”?

Sometimes a widow will move one step forward and two steps back. The amount of time depends on lots of things, such as circumstances of the husband’s death. For example, one client of mine whose husband suddenly died of a heart attack on the tennis court, took almost a year to go from “Grief” to “Growth.” If it isn’t a sudden death, the widow does some of her grieving in advance. Another client, for instance, whose husband had Alzheimer’s, took about six months because his death was anticipated.

How else can advisors help in Stages 1 and 2?

I encourage them to be the widow’s thinking partner — instead of telling her what to do. They should help her with the follow-up of their recommendations and suggestions. And because the first time the widow goes to her estate attorney to settle the estate can be very emotional, a compassionate advisor will go with her.

Stage 3 you’ve termed “Grace.” Tell me about it.

Some people call it “transformation.” That’s when the advisor can do advance financial planning. I call it “redesigning your life” or repurposing it. The widow is going to make new friendships. It’s when advanced estate planning and charitable giving can be done. She may be starting up a business. Maybe a new romance will happen. If so, the advisor will want to talk about a prenuptial agreement.

So the “Grace” stage can be pretty great?

For the woman who makes it into that third stage and for the advisor who can help shepherd her, it’s a very rewarding, beautiful thing. Once the widow “gets” that the advisor understands her, that they speak the right language and know how to communicate with her and has her back, she’ll will be with them forever.

A 2011 Spectrem Group research study of high-net-worth female investors found that up to 70% of wealthy widows fire their financial advisor after the death of their husbands. What can advisors do to prevent that?

Bring [the wife] into meetings. Get to know the family members so that there’s a trust level. When I was an advisor, I held a wine-and-chocolate-tasting party every February. It was a little bit of talk about who the clients’ beneficiaries were going to be, knowing passwords and pin numbers, where the investments were and why they’re invested that way, who the professionals were that the couple works with and what they’re doing for them. Those are things to start talking about.

What’s a big mistake advisors make in working with widows?

One widowed client of mine, in her early 70s, that came to me from another advisor hardly knew him because only her husband [handled the investments].  After he died, the first thing the advisor said to her was that she should be really happy because she was beating the market. He showed her charts and graphs, which she didn’t understand.

Did that make her feel happy?

She didn’t care if she was beating the market. She just wanted to know if she was going to be OK: Could she still live in her house? Would she have to go back to work?  When she started crying, the advisor said: “There, there. Don’t worry your pretty little head. I’m going to take care of everything for you.”

What was her reaction to that?

She walked out. Then she talked to a friend who was client of mine and got my name. In my office, she said, “Am I going to be all right?” That was her main concern.

What did this widow’s former advisor do that was wrong?

What’s absolutely key for FAs to know when serving widows?

The widow’s big concern is feeling safe and secure. It’s knowing how to use the right language with her. Listen a lot more and talk a lot less. Definitely do not say, “Don’t worry your pretty little head”! Tell [laudatory] stories about her husband. Or, if appropriate, say “Unfortunately, I never had the chance to meet [husband’s name]. How would you like others to remember him?”

No. Some are stuck in their grief. These are the women who were joined at the hip with their partner. When he dies, it’s not uncommon that within a couple of years, the widow passes also. Some die within days or even hours, [sometimes] because of the broken heart syndrome. The medical term for that is cardiomyopathy [temporary but sometimes fatal condition brought on by extreme stress].

What if the widow doesn’t get past Stage 2?

A lot of widows are very comfortable staying at Stage 2. And that’s OK.

What approach should the FA use in the first meeting with a newly widowed referral?

Listen to her talk about her late husband. Ask her what her main concerns are and write them down. Then say, “I want to make sure I’ve heard you correctly”; and read them back: “You’re concerned about how to settle the estate, how much you can spend, whether you should move or stay [etc.]. Have I missed anything?”

Tell her you can address all those but that “we don’t have to do them immediately. Some we’ll focus on now and some later.”

What else can the advisor do to be of help in such a meeting?

Fold an 8-1/2-by-11-inch paper in thirds and have the widow write across the top: “Now.” “Soon.” “Later.” It’s best that she write it herself because research shows that we kinesthetically connect by writing things down, and therefore she’ll remember it better. Under “Soon,” might be things like selling the husband’s car.

Skipping far ahead now, have you any advice for the widow who’s ready to start dating? You met your present husband through an online dating service.

I advise widows to always do a background check. I started out with Match.com. The first guy I met had murdered his wife — and he told me how he got away with it! One day he asked me, “If we got married, you’d probably change your insurance policy and make me the beneficiary, wouldn’t you?” The next week he said: “Pack your bags! We’re going to Vegas to get married!”

After that, I stayed away from dating sites for quite a while. Then I went on eHarmony and met my present husband. That site has a whole different [personal-criteria profiling] process. After being together for eight years, we were married last August.

That was after being widowed 12 years ago.

Yes. Tom died in my arms two days before Valentine’s Day. I’ll never stop loving him. But now I get to love two men with the blessing of both. When I’m about to give a presentation, I hear Tom saying to me, “You go, girl! You get on that stage and deliver!’

The Do’s and Don’ts of Virtual Client Meetings

Business psychologist Melanie Katzman tells ThinkAdvisor some best practices — and about her virtual meeting with the Yankees. 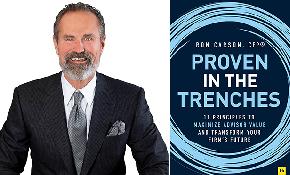 Ron Carson: How the Pandemic Will Shape the Future of RIAs

The Carson Group CEO tells ThinkAdvisor what advisors can expect, what we can't predict, and what's ahead for his firm.