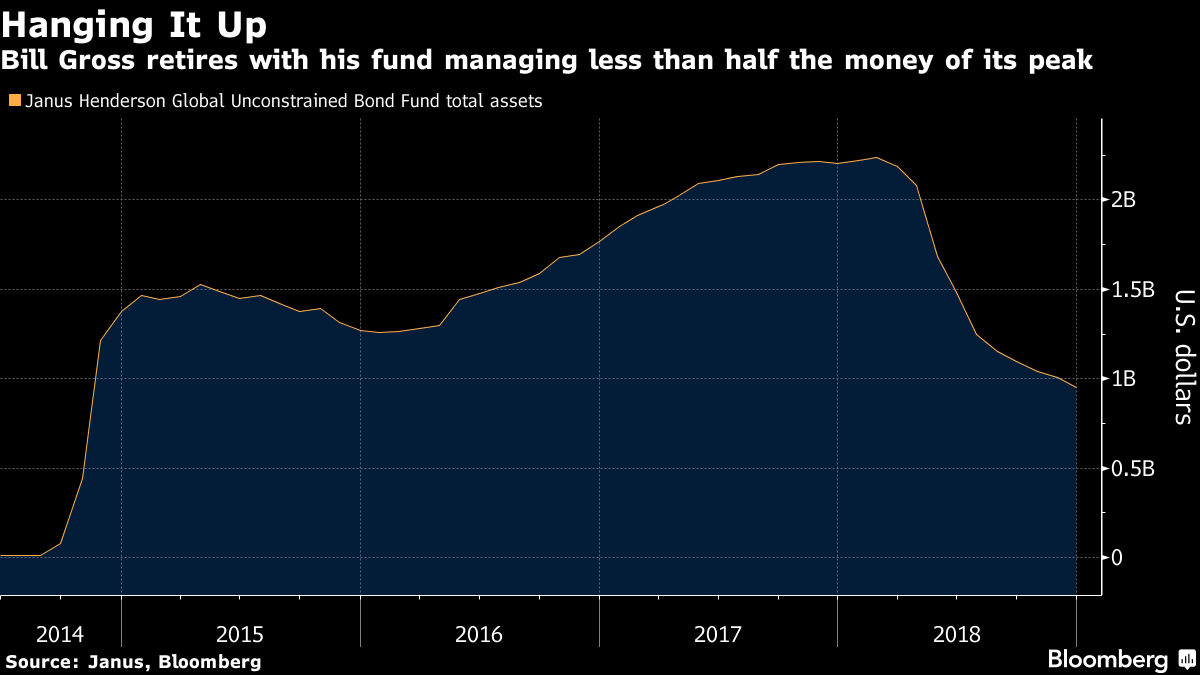 Fixed income fund manager Bill Gross continues to make a splash, even as he exits the industry. Gross, 74, said Monday that he will leave his role at Janus Henderson on March 1 to focus on his own portfolio and philanthropic efforts.

He co-founded the bond shop Pimco in 1971 and helped it grow to nearly $2 trillion in assets as of September 2014, when he abruptly departed for Janus (which had about $175 million in assets at the time).

“As assets at Pimco and Pimco Total Return grew, [Gross] successfully made the transition from being a bottom-up corporate bond-picker to a world class macro-level manager. He built a firm that stands today as among the very best, even in his absence,” the fund research firm Morningstar said in a statement shared with ThinkAdvisor.

“That said, his jarring departure from Pimco and the nasty spat with his former firm were blemishes on his record,” it added.

As for why he’s retiring now, Gross is staying mum about his recent performance at Janus. “It’s been almost a half a century of watching screens and waking up in the middle of the night to check Asia and Europe,” Gross told Bloomberg Television on Monday.

“I’ve got a few Super Bowl rings and it’s time now to enjoy myself and my family,” he explained.

Gross has three children and has been married and divorced twice. The end of his second marriage came after his split with Pimco and also captured headlines due to temporary restraining orders along with accusations of spying, property destruction and extramarital affairs.

Another relationship that went south for Gross was that between him and Mohamed El-Erian, the chief economic advisor for Pimco’s parent firm Allianz. El-Erian was Pimco’s CEO and co-chief investment officer with Gross from 2007 to January 2014.

Bill Gross to Retire From Janus

Still, El-Erian graciously praised his former business associate on Twitter: “A legendary investor, Bill Gross leaves behind him a long history of fixed income innovation and performance. Many of his portfolio approaches and analytical frameworks continue to be used today by investors around the world. Wishing him well in his retirement.”

However, his record at Janus proved less than stellar. The Janus Henderson Global Unconstrained Bond Fund is down 0.06% year to date, after declining 3.8% last year, according to Morningstar; it has underperformed the Barclays Capital Aggregate Bond Index and its fund category in 2017 and 2018 and is now ranked 93rd in its fund group.

The fund now has about $950 million in assets, down from a peak of $2 billion. In comparison, the Pimco Total Return Fund amassed close to $300 billion in 2013.

Gross told Bloomberg Monday that he learned by being a professional Blackjack player not to “put lot of risk on the table.” However, he diverged from that plan over the past few years in his bets on spreads in Treasuries vs. German bonds.

“German bunds in my portfolio started out 190 basis points over, and they’re now 250-plus over. And that’s been the big decider, and one where I probably shouldn’t have put so many chips on the table,” the retiring fund manager explained. “I look back on the performance on the unconstrained fund over the past four years with Janus, [which] has been unsatisfactory no doubt but still positive in nominal terms.”

In contrast, the total-return investing strategies at Janus “actually outperformed by 100 basis points and even outperformed Pimco,” he said. “So maybe I should have stuck to total return and been a little more constrained.”

Bill Gross to Retire From Janus