5 'Weapons of Mass Attraction' to Help You Gain More Clients

Financial advisors can charm prospects and draw them in by unleashing an arsenal of “Weapons of Mass Attraction,” says Ken Schmidt, Harley-Davidson’s former communications director, in an interview with ThinkAdvisor. He played a key role in revivifying the motorcycle maker when it was all but given up for dead.

In his new book, “Make Some Noise: The Unconventional Road to Dominance” (Simon and Schuster — November 2018), Schmidt reveals his approach to defeating the competition by becoming a “dominator” instead of being an “also-ran.” This starts with morphing yourself into a veritable people magnet.

Schmidt is a frequent speaker at financial industry events, and his clients include Citigroup, Merrill Lynch, UBS and Wells Fargo.

In the interview, he explains how FAs can generate buzz — noise — about themselves by putting in play the “Weapons of Mass Attraction” technique. He discusses five components, the first of which includes being super-enthusiastic and giving prospects and clients “a rush of joy.” This differentiator will make them spread the word about what a terrific person you are, he argues.

The increasingly commoditized world of advisors prompts Schmidt to stress a few “don’ts” too: Don’t push product. He has lots to stay about that one. Don’t wait for your firm to lift you up because financial companies’ advertising falls flat with consumers. Don’t imitate what other FAs say and do. Monkey-see, monkey-do proves fruitless.

ThinkAdvisor recently interviewed the marketing expert, on the phone from his office near Washington, D.C. Energetic, enthusiastic and engaging, he demonstrated a knack for practicing what he preaches.

THINKADVISOR: How does your advice to “make some noise” apply to financial advisors?

KEN SCHMDIT: Making noise is what you want people to say about you. You want them not to say you’re “a good advisor” but that you’re an awesome human being. You want to be described as super-friendly. That’s the kind of behavior you need to exhibit in front of the client or prospect to get them to remember you and see it as a point of difference from other advisors.

The reality is that financial advisors are becoming commodities. So how can they differentiate themselves?

Much of the responsibility and, ultimately, the opportunity lies with the individual advisor rather than with their firms. There seems to be a growing sense among financial planners that they’re waiting for someone to push a magic button that makes everything easier for the advisor on the street meeting with clients. That’s utter craziness.

People aren’t going to [beat] your doors [down] and come running in to buy whatever you’re selling. They need to know who you are and to like you more than the people you’re competing against.

How do you encourage them to like you more?

You grow your business because the people you serve are delighted to the point of saying great things about you — and by proxy, your firm — rather than the other way around when you’re waiting for the firm to lift you up. Their ads are all over TV and on the web but are a mishmash of everybody saying the same stuff.

You conduct presentations to firms about “Weapons of Mass Attraction.” What are the “weapons”?

First of all, we need to be more magnetically attractive — not George Clooney-attractive — but exhibiting behaviors that pull people in versus those that repel people.

Visible passion — the magic elixir of everything. In the presence of the physically passionate, super-enthusiastic, joy-emitting person, 100% of humanity leans forward. If they’re genuine, people think: “I want some of that too.” If the [advisor] is clearly enjoying the opportunity to be there, [the prospect will] remember them and be way more inclined to sign on the line. It’s not about which [product] you buy; it’s who you buy it from. And people buy from you — not from the company you represent.

Why is visible passion so powerful?

It makes people feel very comfortable. If the client sees that you’re reacting very warmly to what you’re saying and lighting up pretty much every time they ask a question, it means you’re listening to them, especially if you’re [taking notes] too. People like that and feel you’re making a visible effort to connect with them. The money is in the reaction.

What do you mean?

When you react to what the client is telling you with passion and enthusiasm, it humanizes you and also humanizes the company you work for and [in turn] the financial services industry. So they’ll continue to talk to you. If you just nod or press a few buttons on your calculator, it dehumanizes the situation.

What’s another “Weapon of Mass Attraction”?

We have to break the cycle of pushing and glorifying product. It has to stop because of the huge transfer of wealth that’s coming to the next generation. You think it’s hard to sell a product now? Wait 15 or 20 years when everybody is Amazoned to death and everything is available at the push of a button. If all you’re doing is pushing product, as an advisor, you’re going to be redundant — unnecessary.

Asking open-ended questions. Every one of us on the planet has the same favorite topic: themselves. So get people talking about what they’re interested in. What they most want to talk about is themselves.

You write that another “weapon” in getting people to like you is to praise them.

This is where it really pays off because when we give someone an ego boost or lift their self-esteem, we’re helping them meet an unmet human need. That gives them a temporary rush of joy and delight. Therefore, if it makes them feel good, they’re going keep dipping into that well. If that source of delight happens to be a financial advisor, then they’ll take their next call and become loyal to them.

So inspiring loyalty is another “weapon”?

Yes. Nobody is loyal to a product. We’re loyal to people. If someone makes you feel good about yourself, you come back to them.

Financial professionals are still pushing product. When the decision is always hinged to a product, there’s nothing for the prospect to remember about you or talk about. They feel you’re not there to help them but to help [yourself].

Please talk about “Dominators vs. “Also-rans.” How do you become a dominator?

The only way to become dominant and get ahead of everybody else is to stop doing things the way everybody else is doing them. The biggest mistake you can make is to look like a competitor. You want those new clients, and you want to grow; but there are obvious barriers, a lot of which the industry creates itself. Whoever knocks those barriers down first is going to crush, kill and destroy the folks that are doing things as they’ve always done them — like folks who push product.

The biggest wall is [consumers] thinking: “Why do I need this?” That’s because they don’t see themselves in the marketing that firms do. They’re thinking: “I’m not sure I need this; I’m not really sure what they do.” And “I never hear my friends speaking positively about them.”

You call life insurance salespeople and financial planners “the heavyweight champions of non-memorable language and data.” For one thing, they speak in jargon.

The education, training and encouragement they get is all about the glorification of product. But at the end of the day, you need the person that you’re serving to like what you’re saying, to remember what you’re saying and to tell somebody else about it. They have to really like you as a person, which means you need to be delighting them. You can’t do that if you’re talking about things they don’t understand and are too embarrassed to ask questions about.

“Solution” is an awful word. It tracks with that kind of monkey-see, monkey-do thing that businesses [practice]. When did you ever hear someone say, “solution provider,” and think, “Hey, he’s the one for me!”

Is it a good idea for advisors to talk about their competition when meeting with prospects?

That’s a conundrum for everyone in financial services. People expect advisors to be the experts. That’s why it does them no favor whatsoever to compare themselves to their competitors because prospects don’t know or understand [all the nuances and complexities of investing].

“We can’t easily change our product and services, but we can change what we emphasize,” you write. Please explain.

After the meeting or phone call, what do I want this prospect to remember about me and talk about? What they will never remember is the product and the jargon. But what they’re going to remember is, “I really liked this guy or woman, and here’s why.” Absent that, it’s impossible to build your reputation.

Rebranding efforts “fail to generate much positive momentum … or improvement.” Rebranding is no “silver bullet,” you write. Why doesn’t it work?

Every time someone changes the name of their company, somebody — design and logo firms — probably makes a lot of money. But if there’s no change in the business behavior — how you approach and attend to clients, what your platform is — you can rebrand a thousand times, and nobody is going to know or care. You can put a new coat of paint on the barn, but it still has the same animals inside.

In the wake of the financial crisis, have you had an increase in speaking engagements for financial services firms?

Yes. It started with banks. Suddenly the banking industry realized that no one was going to push their doors open and come in like they used to. Things weren’t easy [anymore]. People were nervous around them and not drawn to them, they said.

Also, people can be intimidated by banks and talking with financial advisors.

Sure. If you don’t speak or understand the language that’s coming at you, you immediately feel uncomfortable. You feel kind of dumb and like you’re going to be taken advantage of. So you want to distance yourself and quickly move away.

Harold Evensky: How Investors Should Prepare Now for a Market Comeback

“The Dean of Financial Planning” tells ThinkAdvisor how advisors should guide clients through the coronavirus crisis, financially and emotionally. 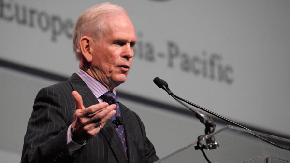 The legendary investor tells ThinkAdvisor how global trade, consumer behavior and the climate could ultimately benefit. 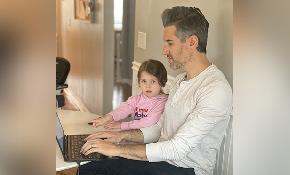 The advisor, a popular presence on Twitter, tells ThinkAdvisor his system for balancing financial planning and family time.