Recent events in global capital markets are raising the critical question of whether business cycles worldwide are not synchronized but instead highly correlated.

Our current outlook for 2019 is that global growth and inflation generally will downshift a bit, which is in line with the International Monetary Fund’s forecast, and that the ongoing recovery since the 2008 global financial crisis will likely proceed at a slower pace and will continue to need policy help. The outcome of the U.S.-China trade tensions and the activities of central bankers are the key elements that will determine what comes next.

How did we get here? Not too long ago, we were flirting with deflation, a possible Chinese recession and the idea of Brexit. Since then, however, we’ve seen disparate growth rates upend market expectations all around. Specifically, U.S. growth accelerated beyond consensus estimates while growth elsewhere in the world has lagged.

At the beginning of this year, it was widely thought that global growth was going to be synchronized. Slowly but surely, optimism in the U.S. built up throughout most of 2018, helped by federal fiscal thrusts (primarily in the form of the tax cuts). But at the same time, we’ve seen a moderation of growth in Europe and emerging markets (EM).

Now we believe the optimism for U.S. growth is a bit overdone while the pessimism around the lethargic global growth rate has gone too far as well. As a result, we expect a slight pullback in the U.S. and an uptick in economic expansion elsewhere. Emerging markets, although very volatile, should outperform.

Three of the biggest impediments to growth over time are debt, demographics and trade tensions. Global debt levels are much higher than they were prior to 2007. Back then, we were concerned about consumer debt (a proximate cause of the financial crisis). Today’s debt is on public balance sheets and therefore financeable at government rates. Nevertheless, as interest rates rise, the debt load will become more difficult to manage both in the U.S. and around the globe.

Aging populations in the developed world are another long-term concern. Within a few years, China will start to see the same demographic challenge.

When it comes to trade tensions, there are two ways to look at them. On one hand, there’s an immediate step up in prices as the cost of goods goes up with the tariffs. But the bigger risk — which has been mentioned by both European Central Bank President Mario Draghi and Federal Reserve Chair Jerome Powell — is once again the possibility of declining growth. At a minimum, trade policy creates uncertainty with respect to business investment and it can also lead to major delays in capital investments.

Trade has been a meaningful component of the positive GDP numbers we’ve seen over the past year. The question we’re asking now is whether the U.S. can sustain continued trade gains in the face of weaker economic growth, a stronger dollar and ongoing tensions with China.

One of the popular misconceptions about the situation we find ourselves in today is the erroneous belief that the U.S. can boom while the globe can bust. This divergence has created a wedge between the U.S. and the rest of the world that has not only been able to persist but has actually widened. However, we do not expect this to continue.

We believe very highly correlated business cycles will re-emerge. In the U.S., our expectation is for a diminished rate of inflation as the Fed’s policy tightening starts to work and for the recent outsize growth rate to moderate. Overall, we expect the global recovery to stay on track, albeit at a slow pace that is not without its challenges. 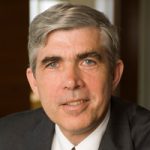