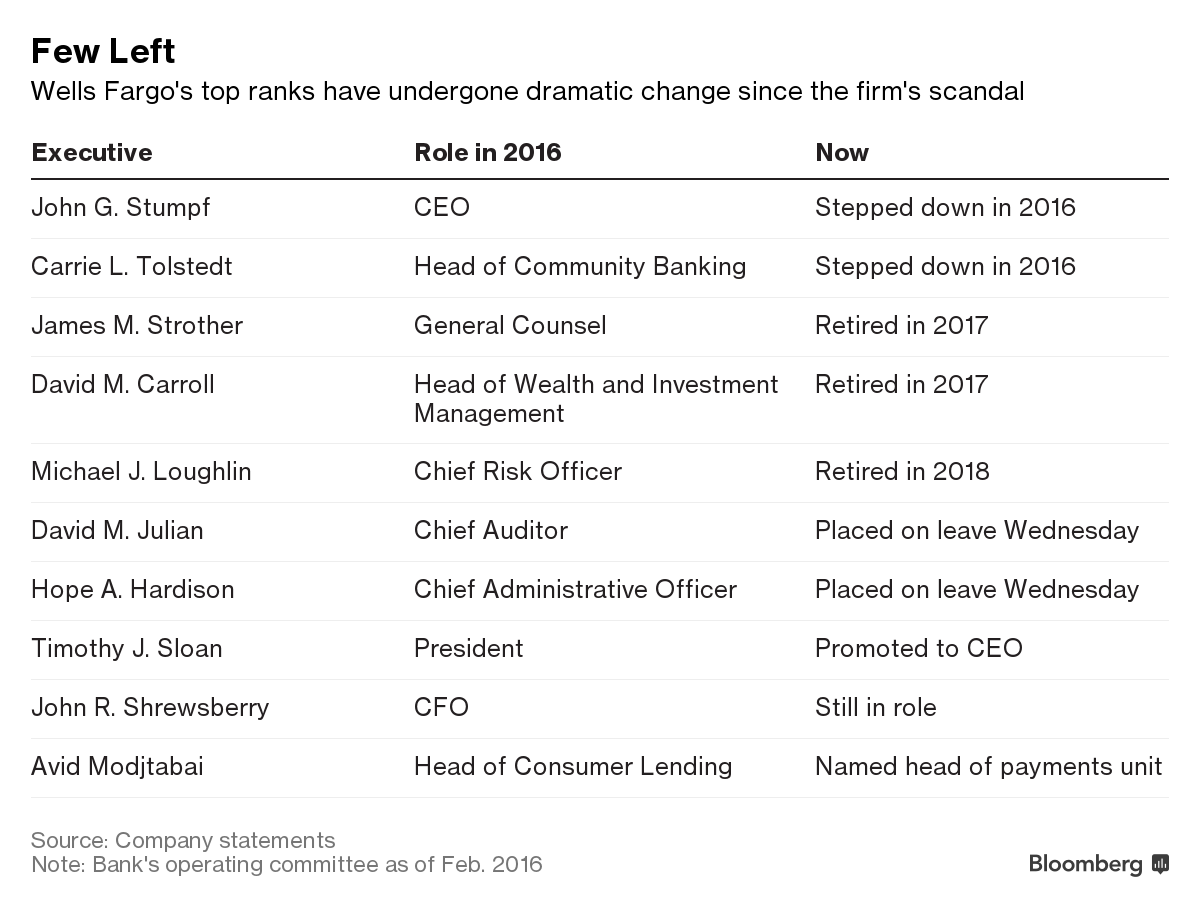 Wells Fargo & Co. said its chief administrative officer and chief auditor will be placed on leave and removed from the firm’s operating committee amid regulatory investigations into the bank’s sales practices.

The leaves of absence for Hope Hardison and David Julian aren’t related to the bank’s reported results, San Francisco-based Wells Fargo said Wednesday in a statement. The firm said some executives under the two will now report directly to Chief Executive Officer Tim Sloan.

The moves show that the bank is still grappling with management fallout from a fake accounts scandal that erupted more than two years ago. Wells Fargo this week paid $65 million to New York state regulators over the issue and still faces a bevy of related lawsuits and regulatory probes.

With Wednesday’s change, just three of the 10 members of Wells Fargo’s operating committee as of February 2016 remain there today: Sloan, Chief Financial Officer John Shrewsberry and Avid Modjtabai, who leads the bank’s tech-payments division. Carrie Tolstedt, who led the community bank where the fake-accounts scandal took place, and then-CEO John Stumpf both left the firm in 2016.

The two executives are on leave after the Office of the Comptroller of the Currency sent letters to each of them, the Wall Street Journal reported, citing people familiar with the matter. The OCC said that the executives had failed to oversee problems at the bank, the newspaper reported.

See A Timeline of the Wells Fargo Scandals.

Wells Fargo hired Mandy Norton from JPMorgan Chase & Co. to be chief risk officer earlier this year. David Galloreese, who joined Wells Fargo in June as head of human resources, will now report directly to Sloan and serve on the operating committee.

“During the past two years, we have become more customer-focused, made significant leadership and board changes, strengthened risk management and controls, simplified the organization, and invested in our team members,” Sloan said in Wednesday’s statement.

Wells Fargo is searching internally and externally for a new chief auditor, and Kimberly Bordner, current executive audit director, will serve as Julian’s replacement in the interim.