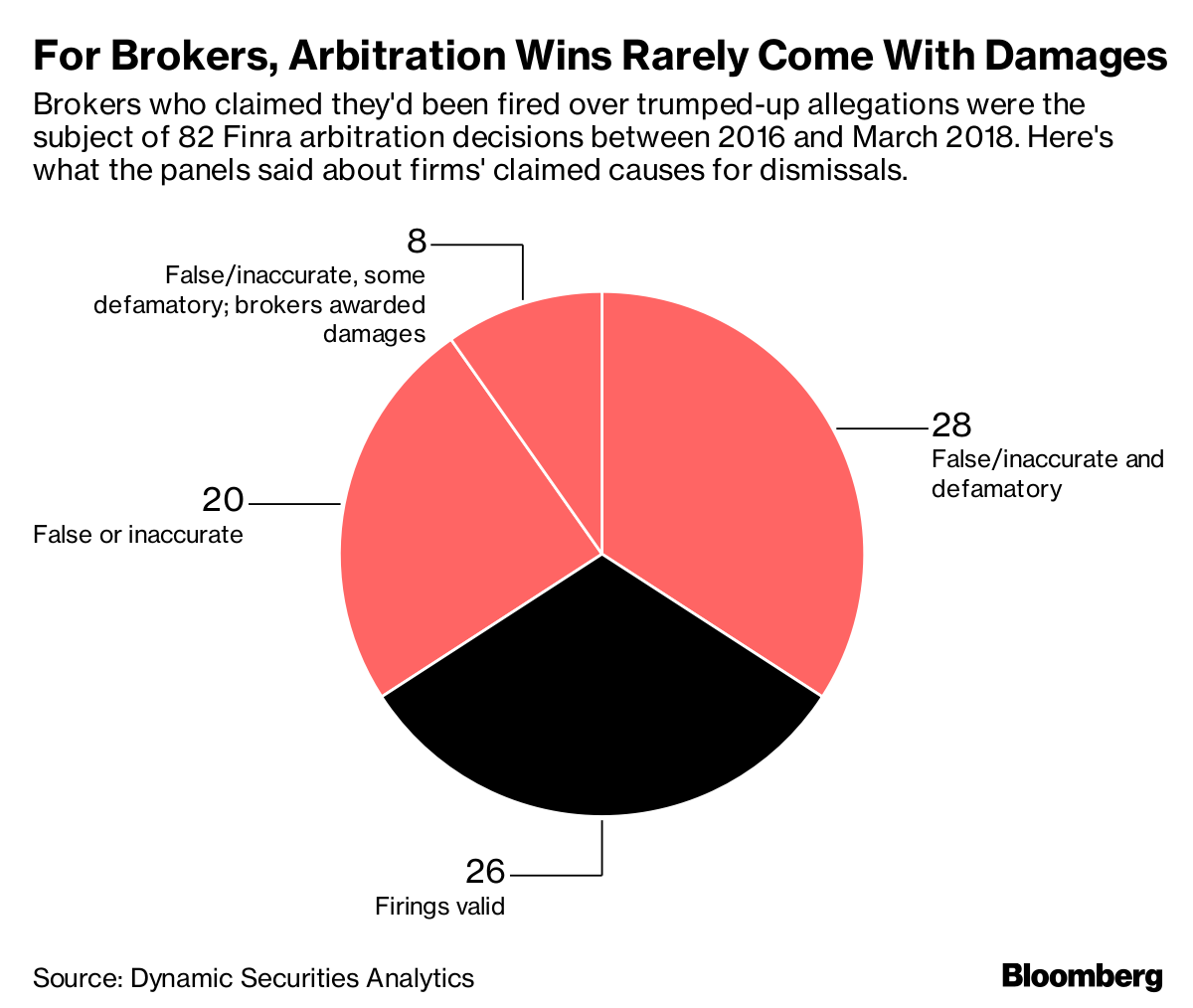 Dale Cebert was managing over $400 million for Morgan Stanley Smith Barney when the bank fired him. That wasn’t the only blow. The bank also claimed he had drawn multiple customer complaints and run a side business without approval — allegations it put on his online employment record for anyone to see.

Insisting those allegations were bogus, Cebert fought back.

Arbitrators ultimately found the bank flubbed an investigation of him, was “grossly negligent” and possibly “malicious” in communications with his clients and put inaccurate information in his employment record, according to their ruling. He got a multimillion-dollar award plus something else that’s rare in his business: He got his old employer to clear his record.

Cebert is part of a tiny group of brokers who’ve tried to force an ex-employer to expunge reputation-damaging disclosures — and among an even smaller handful who’ve prevailed.

Plaintiffs’ lawyers and others say most investment advisers choose not to expend the time and money it takes to clear their records. Cebert spent almost $2 million on legal fees, with no guarantee of success.

His experience hints at how the public broker record, meant to help investors shop for investment advisers, may in fact be pockmarked with inaccurate slights against brokers.

“Unfortunately, many advisers who feel they were wrongfully terminated aren’t in a position to fight,” Cebert said, adding that he wonders how many others in his position lack the resources.

Morgan Stanley, in a written statement, said of the 2016 ruling: “We disagree with the panel’s decision regarding this case. In particular, we stand behind the quality and thoroughness of the internal investigation that resulted in Cebert’s termination.” The bank declined to comment more broadly about its use of broker employment reports.

In making grievances about ex-employees public, the brokerage business is an outlier. Employers in other industries tend to keep quiet about departing workers for fear of litigation.

The brokerage business, by contrast, is required by regulators to report the reasons for each adviser firing using a so-called U-5 form that is transmitted to other brokerages. Those reasons are also added to broker records on BrokerCheck, a website meant to help investors avoid bad actors.

But some brokers and lawyers who represent them say that banks may also use the public comments to wrongly undercut the brokers — often in an effort to hobble their chances of taking business with them on the way out the door.

That makes it another front in a long-running war between investment firms that aim to keep departing advisers from taking clients with them, and the brokers who say their hard-won client relationships should be portable.

“Marking up a U-5 is the latest weapon in their arsenal,” says Sharron Ash, who represents advisers at the Hamburger Law Firm.

Because many advisers choose not to challenge their black marks, there’s no telling how broad any defamation problem may be. There’s also no way to assess the validity of individual claims by ex-brokers that don’t make it to arbitration. But for the advisers who do choose to make formal complaints, the deck appears stacked in favor of the employers.

Penalties for firms that improperly stain a broker record are low — under $100,000 — and are hardly ever levied.

Brokers who want to protest have to begin with the arbitration process overseen by the industry’s self-regulator, the Financial Industry Regulatory Authority, known as Finra. There, they go up against a deep bench of lawyers representing their old firms.

Because those penalties and big damage awards like Cebert’s are rare, firms could look at the overall costs and decide that filing inaccurate U-5s are a “cost-effective business decision,” said Alison Jimenez, the president of Dynamic Securities Analytics, a securities research firm that has studied recent Finra employment disputes.

Finra says its BrokerCheck site is reliable. “We work very hard to provide the most current and accurate information to investors looking to make decisions about brokers and firms,” Finra spokeswoman Michelle Ong said.

Finra, which had previously been criticized for not including some negative information about brokers on BrokerCheck, responded by agreeing to make its reports more complete.

The Securities Industry and Financial Markets Association, the brokerage industry trade group known as Sifma, “does not comment on litigation or other dispute resolution outcomes” as a matter of policy, according to spokeswoman Katrina Cavalli.

Get Ready for Health Insurers to Raise Prices Next Year

In the Cebert matter, the fired broker told Finra that a Morgan Stanley employee had likened him to Ponzi schemer Bernard Madoff in conversations with his former clients.

“Trashing the reputation of a productive broker and then lying to his clients in order to take them is a common practice for Morgan Stanley,” he claimed in a Finra filing. The arbitrators agreed that he had been defamed.

Even when advisers win their cases, they may end up with little to show for it. (See chart at the top of the page.)

Finra arbitrators ruled on at least 82 cases between 2016 and the first quarter of this year brought by brokers who claimed that their ex-employers had inaccurately reported the reasons for their dismissals, according to previously unreported research by Dynamic Securities Analytics.

That was out of about 300 claims over that period, the majority of which were later withdrawn or resolved through settlements, Finra data indicates.

Of those 82 cases, arbitrators ruled in favor of advisers 56 times, Dynamic Securities Analytics said. In half of those cases, the Finra panels concluded that the reasons brokerages gave on U-5s for firings were not only inaccurate but also defamatory. Arbitrators awarded monetary damages only eight times, the research firm said.

Unlike court cases, Finra arbitration proceedings are private, although parties can disclose filings at their discretion. Once arbitrators rule, Finra publishes a summary of the findings.

Deborah Greenlee-Keck bore the cost of pursuing an arbitration case and losing. A broker in Indiana, she was accused of defecting to Wells Fargo Advisors without properly disclosing a J.P. Morgan Securities disciplinary review.

On her BrokerCheck record, J.P. Morgan wrote that it was looking into whether she might have engaged in “financial transactions with firm customers and a co-worker in violation of bank policy and for using one client’s funds to pay down the credit card balance of another client.”

Greenlee-Keck spent two years trying to clear her name, alleging defamation. When her money ran low, her lawyers dropped her. She hired a local lawyer who had no Finra experience.

She was down about $200,000 in legal fees when she lost her challenge. She decided not to dispute a move by Finra regulators to bar her from the industry. Now she sells home-décor products.

The arbitration process was intimidating and “frightening,” she said. “It was my hometown attorney and me against two powerhouse firms with multiple attorneys each and their own people,” she said.

Brandon Mink decided he couldn’t afford not to try to clear his reputation. One day in late 2016, Mink was called abruptly into a meeting with his boss at UBS Group AG in Tysons Corner, Virginia, and was fired.

As soon as he was out the door, he says, bank employees started steering his clients to Mink’s marked-up BrokerCheck page and warning them against keeping their money with him.

The consequences for Mink have been dire. He stopped hearing from a major firm that had been discussing a lucrative sign-on package, he said. Clients yanked almost $100 million of the $260 million they’d invested with him, he said.

Left on his own, Mink says he’s had to fight “Jerry Maguire-style” to keep his practice afloat while battling a strong sense of failure and caring for two kids he’s raising on his own.

“Getting fired, or even investigated, is a deal-killer for finding another job or keeping some clients,” Mink says. “Nobody knows who to believe. I get it.”

Mink says he’s spent about $62,000 so far to make the case that the bank’s actions defamed him. He’s asking arbitrators who will soon hear his case to compel UBS to wipe his record clean and pay him roughly $3.8 million in damages. The bank says Mink’s firing was justified and it did nothing wrong.

“A lot of people who go on BrokerCheck and see that I’ve been fired are going to shy away,” Mink said. “The continuum of damage is huge.”