Cannabis stocks jumped considerably after Canada approved legalization of cannabis for sale and distribution in June. In fact, after it went legal on Oct. 17, marijuana was in short supply in Canada and many shops almost ran out. And though this may be a reason to keep an eye on marijuana for investment, prices can be turbulent.

As it stands, the only countries in the world where marijuana is legally sold and distributed both recreationally and medicinally are Canada and Uruguay. The Netherlands, infamous for its decriminalization of cannabis years ago, has limited laws where sales are allowed only at licensed establishments.

That ambiguity hasn’t stopped cannabis firms from listing on U.S. exchanges as well as launching ETFs. The addition of the firm Aurora Cannabis (ACB) to be launched on the New York Stock Exchange on Tuesday adds to the array of ways U.S. investors can jump into the pot fray without going north. 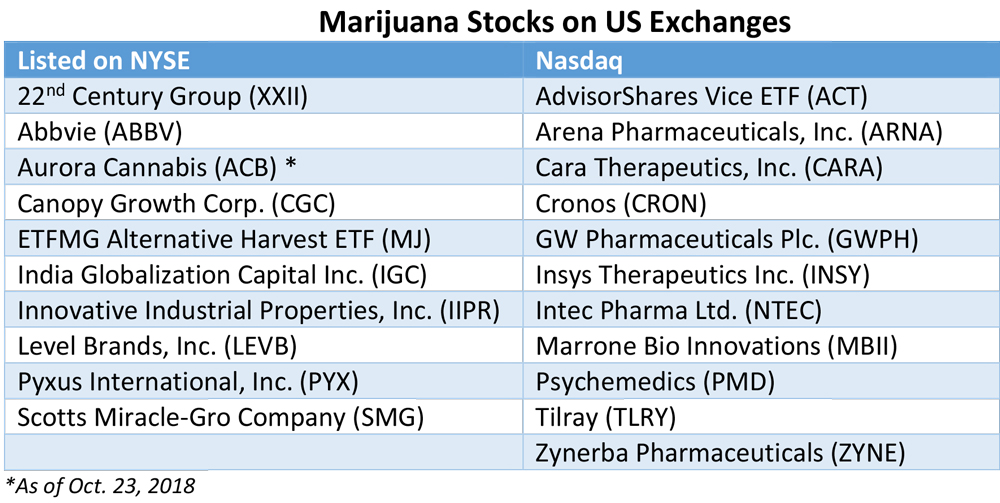 But investors must do their homework on this volatile product, and they should stick with individual stocks, says Patrick Wood, president of Tormont Group, a Toronto-based firm that finds quality firms to take public. Although the price of marijuana rose toward the launch of legality in Canada, there was nearly a 27% drop beginning Oct. 16, according to the North American Marijuana Index. The U.S. index had about a 10% drop before recovering, then dropping again.

Individual stocks also took a hit: Tilray dropped more than 6%, while Canopy Growth lost 3.5%. Even the most popular ETF, the ETFMG Alternative Harvest ETF (MJ), fell 3%. However, many of these stocks had incredible growth over the past year. Tilray has jumped 750% since its initial public offering in July, while Canopy is up 100% since July. Wood said a key reason for the drop in prices was “valuation in the sector had been buoyant, and unjustly so.” He pointed out that Canada’s population (36 million) was smaller than California’s (39 million), so valuation of companies that rose on the way to Canadian legalization was “out of whack” as the market wasn’t that large.

He pointed out that most of the cannabis firms were producers, that is large growers of the product, and like any commodity, the price reflects that value. He added that in what they call Cannabis 2.0, producers are looking south to grow much cheaper product than “someone who has a greenhouse in Manitoba.”

He sees the business value rotating away from producers to “pick and shovel” companies, those who service the business. For example, one firm, POSaBIT, has developed a point-of-sale product in which buyers of cannabis in the U.S. can use their credit and debit card, as the firm uses a crypto currency work-around that makes it legal.

Another firm, which he says has the “Holy Grail” of cannabis, is GW Pharmaceuticals Plc. (GWPH), which has gotten two FDA approvals using CBD — a cannabis compound said to provide medical benefits without psychoactive effects — in drugs that help reduce inflammation. “GW is like Microsoft was in the tech boom,” he said. (GWPH fell about 8% on Monday, then recovered to be down from its open only 3.5%.)

Wood does warn that ETFs are too general to be a good investment choice, and says being “company specific,” especially looking at the 2.0 firms, is the way to go with cannabis investing.