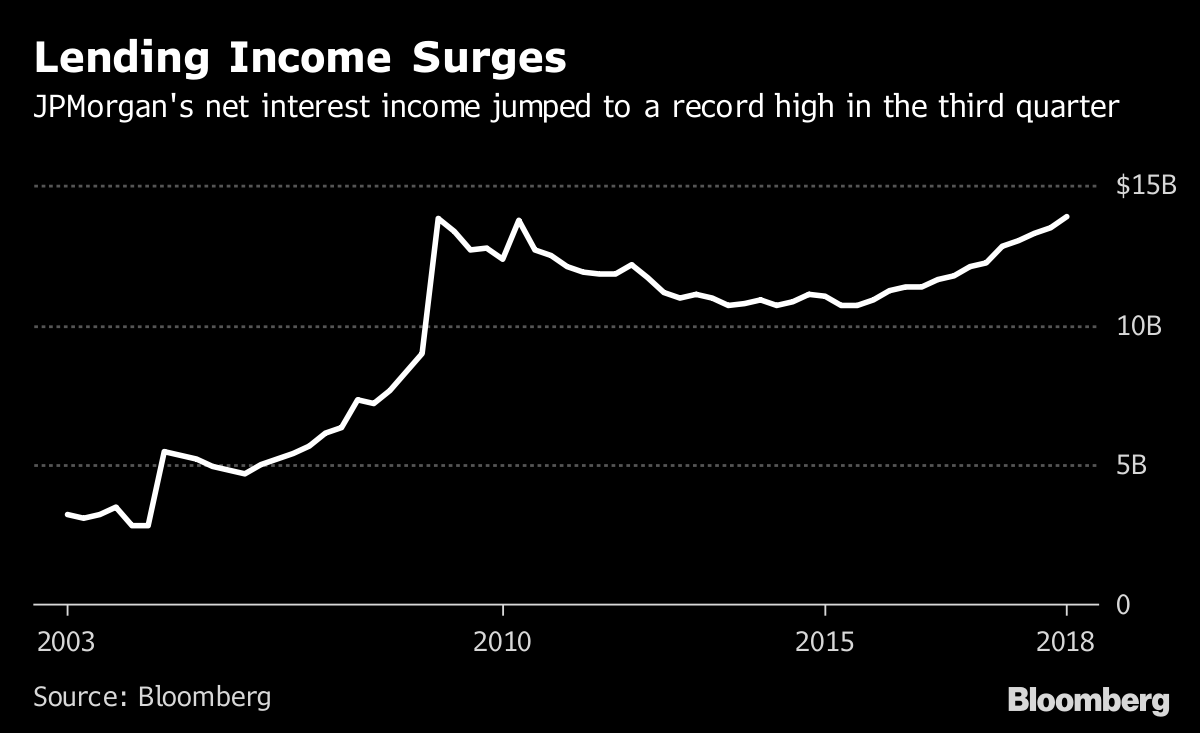 JPMorgan’s core-loan book expanded 6 percent, excluding the investment bank, even as it faced stiffer competition from non-traditional lenders and as rising interest rates sapped demand for some types of borrowing, including mortgages.

Some companies borrowed to fund growth plans in the wake of President Donald Trump’s tax cuts. Before the report, analysts had predicted loans would only increase 2 percent for the four biggest U.S. money-center banks.

The increase in NII put the New York-based lender on pace to meet more optimistic guidance set by Chief Financial Officer Marianne Lake at an investor conference in September, when she said the bank could generate $55.5 billion of net interest income in 2018. That was a boost from the $55 billion she forecast in February.

Analysts have warned that bank profits could be nearing their peaks as the benefits of lower taxes, declining legal bills and rising interest rates start to fade.

Charles Peabody at Portales Partners cut his recommendation on JPMorgan to sell from neutral Wednesday, citing the possibility of falling revenue, higher credit costs and weaker shareholder returns in 2019.

Chief Executive Officer Jamie Dimon said the expanding list of geopolitical and economic uncertainties raises the risk that one of them will hurt the economy.

He pointed to escalating trade skirmishes, rates rising faster than expected, Brexit, Italian sovereign-debt problems, rising tensions with Saudi Arabia and higher mortgage rates, among other events that could take a toll on global and U.S. growth.

“There’s eight or nine things out there,” Dimon said on a call with journalists, adding that he’s seeing a bit of deterioration in the outlook. “In general those things don’t necessarily derail the U.S. economy, but they are all out there. No one should be surprised if it happens down the road.”

The bank’s net interest income beat a previous record of $13.8 billion set in the fourth quarter of 2008. On an adjusted basis, it was $14.1 billion, surpassing the $14.03 billion average estimate of six analysts surveyed by Bloomberg. The amount the bank set aside for bad loans was $948 million, less than the $1.46 billion analysts expected.

While Dimon said the next downturn could be triggered by borrowing costs increasing faster than expected, he said higher interest rates would probably benefit the bank’s trading business.

“Trading is usually enhanced by more volatile markets and rising rates probably causes a little more volatility,” Dimon said. “Obviously you have to be good trader to benefit from that.”

Happiness Really Can Be Found in a Steady Paycheck

Client activity around the Federal Reserve’s hike in late September helped the bank post a surprise 9 percent jump in revenue from fixed-income trading in the third quarter.

It marked the first increase since the start of 2017, offsetting weaker results from U.S. consumer banking. Cost cuts inched the bank closer to a key efficiency target.

Chief Financial Officer John Gerspach wasn’t so optimistic just four weeks ago, when he told investors that total trading would be flat to “slightly higher.”

But a growing pile of evidence, such as stronger U.S. payrolls, encouraged customers to prepare for higher interest rates — despite Trump’s repeated laments. Citigroup said Friday that trading was boosted by rates and currencies, as well as spread products.

“Our results this quarter showed solid year-over-year revenue growth across many of our businesses, including fixed income,” Chief Executive Officer Michael Corbat said in a statement, pointing to that business before others.

Citigroup’s fixed-income traders had been on a losing streak. Revenue from handling bonds, currencies and commodities had dropped for five straight quarters, when compared with year-earlier periods. This time those desks generated $3.2 billion, beating analysts’ predictions for revenue to be little changed at $2.95 billion.

Revenue from rates and currencies gained 7 percent to $2.2 billion, while trading of spread and other fixed-income products climbed 14 percent to $747 million.

An opposite picture emerged in the North American consumer business, which suffered a rare drop, with revenue down 1 percent to $5.1 billion. The bank blamed trends including a decline in mortgage business, as well as the sale of its Hilton Worldwide Holdings Inc. credit-card portfolio.

Here are other key numbers from the third quarter: Revenue was flat compared with a year ago at $18.4 billion, shy of the $18.5 billion average of analyst estimates.

Happiness Really Can Be Found in a Steady Paycheck