Guess Who’s Getting Richer From Higher Rates? (Probably Not You) 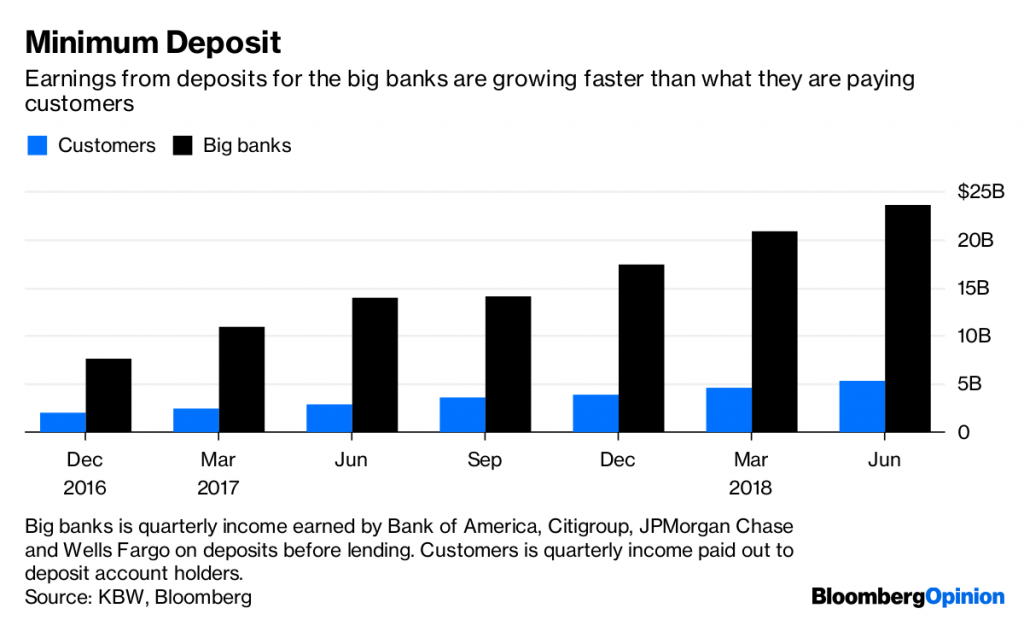 One of the chief criticisms of the Federal Reserve’s strategy of prolonged low interest rates was that it punished savers. But now that the Fed is generally raising rates, the rewards don’t appear to be going to them. Instead, I calculate that as much as 83 percent of the gains are going to the banks, with the largest ones sucking up the biggest benefit.

Here’s my math: The nation’s four biggest banks — Bank of America Corp., Citigroup Inc., JPMorgan Chase & Co. and Wells Fargo & Co. — have just more than $5 trillion in deposits among them. Those deposits, based on the Fed’s overnight lending rate, are generating about $94.5 billion a year for the banks, up from $6.3 billion three years ago, before the Fed started raising rates. And that’s before the money they make lending out those deposits. Interest rate disclosures and recent calculations from analysts at KBW, an investment bank that specializes in the financial sector, indicate that those four banks are capturing as much as $73 billion of that $88 billion increase. Depositors’ income has risen just $1.25 billion a month, or $15 billion annually at current rates.

JPMorgan CEO Jamie Dimon alluded to the split in an interview this week with CNBC. Bank investors have been worried that the flattening of the yield curve, which measures the difference between short-term and long-term rates, would squeeze bank profits. And as the Fed raises interest rates, the curve will most likely get even flatter. Dimon said not to worry. His bank, he said, absent a recession, would make a lot more money from higher interest rates regardless of the yield curve. Indeed, JPMorgan’s deposit income is $17.4 billion more than it was making annually in late 2016. The extra income that it is paying depositors has increased only $3.8 billion over the same period.

A few years ago, some analysts and even bank executives argued that depositors would quickly be rewarded with higher income when the Fed raised interest rates. The argument was that fintechs and other startups, like Goldman Sachs’s consumer internet bank, Marcus, as well as the easy of shopping for the best deposit rates online would force the big banks to increase their payouts more quickly than in the past. But that hasn’t happened. According to KBW, deposit betas, which track how fast deposit costs for the banks are rising compared with interest rates, are about half what they were the last time the Fed raised interest rates.

And the biggest banks have been able to maintain the lowest deposit rates. KBW calculates that the average rate paid on deposits in the second quarter by what it calls the universal banks, which include the big four as well as State Street Corp. and Bank of New York Mellon Corp., was 0.58 percent, compared with 0.79 percent average paid by the nation’s small and midsized banks.

The result is that the spread that the banks pocket between what they pay to depositors and what they receive in interest from the Fed’s guaranteed overnight interest rate has more than tripled over the past year and a half to 1.43 percent from just 0.44 in the last three months of 2016.

One reason could be technology. Once a customer learns a bank’s mobile app, it may be difficult to switch to another just for a slightly higher return. Or it could be could be the perceived safety of the big banks, which were bailed out by the government in financial crisis. And deposit betas, while still lower than in the past, have started to rise. But the biggest reason is mostly likely simple: size. The nation’s four biggest banks were allowed to get bigger in the financial crisis and have grown, albeit slowly, ever since. That’s most likely given them even more pricing power than before.

Part of President Donald Trump’s plan to boost the economy is to lower regulations on the banks to make them more profitable so they will lend more. And helping the banks tends to trickle down some to borrowers and savers. But the banks help themselves first.