Congress sent a message to financial regulators in 2010: no more pay that encourages Wall Street to take extra-large risks.

Since 2011, the average bonus at New York securities firms has climbed 31 percent.

The debate over reining in financial-industry compensation has now dragged on two years longer than it took Michelangelo to paint the Sistine Chapel. Big-bank lobbyists have even stopped talking about it. The work on implementing the rule, part of the Dodd-Frank Act, is shouldered by six government agencies with sometimes competing agendas. It stalled over a key concept: how to identify which employees expose a firm to enough danger that their pay ought to be capped.

“They’ve been dragging their feet for six years while we’re continuing to see pay levels go up,” said Sarah Anderson at the Institute for Policy Studies, a Washington-based advocacy group. “I think they want people to have the impression that, ‘Oh, Dodd-Frank passed and that’s done now.’”

Even as the industry braces for possible lower bonuses due to business conditions, Wall Street pay has become an issue in the U.S. presidential campaign, with candidates addressing the issue in the context of income inequality and the danger recklessness poses to the economy.

Skewed incentives helped push the global financial system to the brink eight years ago. Lenders wrote too many unreasonable mortgages, traders sold too many offbeat financial instruments like collateralized debt obligations and credit-default swaps, and compensation ballooned. Citigroup Inc., which received emergency loans of $45 billion from taxpayers and much more from the Federal Reserve, paid a single energy trader a bonus of nearly $100 million. American International Group Inc. awarded $165 million in bonuses in 2009 after a $182 billion taxpayer bailout.

Americans’ anger over such behavior led to the 2010 passage of the Dodd-Frank law, which aims to decrease the odds of a sequel by limiting any bonus incentive that “encourages inappropriate risks.” Details were left up to government agencies.

The three bank regulators – the Fed, the Federal Deposit Insurance Corp. and the Office of the Comptroller of the Currency — have only recently settled on how to label the key risk-takers whose compensation they need to constrain, and officials say they hope their proposal could be ready as soon as next month, according to a person with knowledge of the discussions. Still, that’s only the banking regulators. Others need to be convinced.

Additional sections of Dodd-Frank concerning executive pay have also taken the slow lane. In August, the Securities and Exchange Commission finished a long-awaited rule requiring public companies to compare the wages of a typical employee with chief executive officer pay. Also last year, the agency put together a provision that allows an executive’s pay to be clawed back if a company misreports earnings.

From the early days of Dodd-Frank it was clear that one of the hurdles would be getting the SEC to play nice with the banking agencies. The three bank regulators tried to come up with a unified plan they could present to the SEC, said a person with knowledge of the discussions. The Federal Housing Finance Agency and the National Credit Union Administration are the other government bodies involved.

Spokesmen for the Fed, the FDIC, the OCC and the SEC declined to comment. 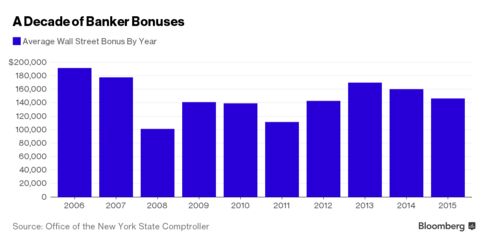 To be sure, it’s a tough job. The challenge is to work out a universal way to outlaw hazardous behavior among a diverse range of firms — from asset managers such as BlackRock Inc. to investment banks like Goldman Sachs Group Inc. to deposit-taking institutions like Wells Fargo & Co. — in a business that thrives on, and relies on, taking risks.

The agencies made a first stab at proposing a rule in 2011, but critics assailed it as granting the industry too much wiggle room and it was scrapped.

Meanwhile, a JPMorgan Chase & Co. trader named Bruno Iksil — better known as the London Whale — and his colleagues lost more than $6 billion in derivatives trading in 2012. His kind of high-level pay — about $14 million in the two years before the trading losses — encouraged high-level risks, according to a U.S. Senate investigation. Ohio Democratic Senator Sherrod Brown argued the incident was an illustration of the need for limits.

Last month, President Obama told the leading financial regulators that they needed to outlaw the bonuses that encourage “big, reckless risks” that can harm the financial system. “We still have work to do,” he said.

U.S. regulators’ European counterparts have been capping financial-services bonuses at twice an employee’s base pay. That constraint has been criticized as rigid and the European Union is now reconsidering the idea.

Daniel Tarullo, the Fed governor who takes the lead on bank supervision, told Bloomberg TV in November that banks’ pay systems are “night and day” compared to what they were before the crisis. He said he doubted the industry would need dramatic compensation shifts after this rule comes out.

On March 23, Credit Suisse Group AG said the bank’s traders had amassed holdings of hard-to-sell assets without many senior executives’ knowledge, contributing to a first-quarter loss in the markets business.

Employees of New York securities firms have enjoyed a 45 percent climb in average bonuses since a post-crisis trough, according to estimates from the New York State Comptroller, which noted a decline to $146,200 for 2015. And at the top of banking’s executive flowchart, JPMorgan’s CEO, Jamie Dimon, received a 35 percent pay bump to $27 million for last year.

Anderson of the Institute for Policy Studies called the pay-rule delay “absolutely outrageous” and said the changes the industry has made in the meantime haven’t amounted to much. She said advocates of the rule had been worried that post-crisis resentment of Wall Street would subside and the bonus constraints would be forgotten, but she said this year’s presidential race has shown that “anger is still very much there.”

“If these regulators think they can get away with just quietly burying this, I think they should realize otherwise,” Anderson said.

More investors to agitate for change at life insurers in 2016