For Retirees, Giving Back Is a High Priority

When we look at American retirees, what do we see? People in need of help or people prepared to help? asked Ken Dychtwald. Its both.

Retirees are too busy worrying about how to stay afloat financially to have time for anything else, right? Wrong, according to Age Wave CEO Ken Dychtwald. Not only are 45% of volunteer hours manned by retirees, but retirees also out-give their younger, employed counterparts.

Those are just a couple statistics that Dychtwald shared Monday during the American Society on Aging’s Aging in America conference in Washington. While the financial challenge for retirees “is a bear” and will continue to be so, Dychtwald told reporters during a luncheon after his presentation, a “couple ticks below” stressing about finances is the desire to give back.

Dychtwald tackled during his talk at the conference what he said has been an overlooked issue: “When we look at American retirees, what do we see? People in need of help or people prepared to help?” he asked. “It’s both.”

Cyndi Hutchins, director of financial gerontology at Bank of America Merrill Lynch, added while onstage with Dychtwald that “a whole new definition of success” emerges for retirees, with those in their golden years being “six times more likely to define success by generosity than wealth,” Hutchins said.

The next joint study, on leisure, is due out in May.

The study found that through their combined donating and volunteering contributions to nonprofits and causes, the boomer generation is poised to create a “longevity bonus” estimated at a cumulative $8 trillion over the next two decades in the United States.

The report cites three forces that will drive this surge in giving:

Based on giving rates among retirees today, the study says that charitable giving from retirees will increase to an estimated $6.6 trillion over the next two decades, while within the same timeframe, the retirement of the boomer generation is projected to generate 58 billion volunteer hours. Using an industry standard for valuing volunteer time, retirees will contribute almost $1.4 trillion worth of service.

Dychtwald noted that while corporations are responsible for about 5% of charitable donations, 15% come from nonprofit organizations, and 80% of such donations are from individuals. “Poor people do give,” he said; “people of all income and asset levels are charitable, with the lowest income people [being] the biggest givers of all.”

Retirees “make up 31% of the adult population and they gave 42% of all the financial [charitable] contributions in this country” last year, he added.

Dychtwald also noted during the lunch with reporters the importance of “science” as well as policymakers in tackling the scourge of Alzheimer’s disease. There are “5 million Americans with Alzheimer’s,” he said. “I’d love to hear candidates talk about that. That’s the plague that’s going to take our country down.” 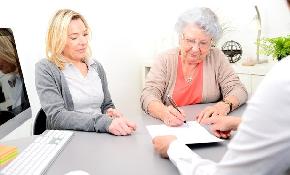