Dave Ramsey deserves everything Brian Stoffel gave him — and then some

Nope. Not at all.

Last year, the financial giant Dave Ramsey was bested on his own show. Amazingly, this got very little press coverage and yet this one single interview has huge implications for both Ramsey and many of his followers (not to mention the financial planning industry). The guest? The Motley Fool’s Brian Stoffel.

Let’s set aside, for a moment, all of Stoffel’s lesser qualities. No, he hasn’t been a finance writer for very long. He doesn’t have a finance degree. He doesn’t have the “clinical” experience of working with clients. He doesn’t even have experience being interviewed by giants like Ramsey. That actually makes the interview even more stunning. Stoffel has beaten the giant of faith-based financial planning, and he wasn’t given the recognition he deserves. In case you missed it, here is the interview where Stoffel confronts Ramsey about his infamous 12 percent math.

The fundamental issue is math honesty

Ramsey tries to make the issue about saving money and motivating people to do the right thing. However, the issue is, and always was, about the math involved — specifically, honesty in math. And if you’re in the financial planning business, you had better be concerned with honesty, especially when it comes to averages.

This is one of the most under-appreciated and under-analyzed aspects of financial planning. It’s rare that you see anyone talking or writing about this at all. Yet, it’s one of the most important things to get right when you’re offering financial advice, especially investment advice. The arithmetic mean is just the simple averaging of numbers. So, for example, if you have the following investment returns:

The arithmetic mean is 3.167 percent. This is the average rate of return, and it’s what many financial professionals still use when discussing investment returns. Oddly enough, you can even find this kind of math being used in life insurance (and other) illustrations.

It gives you a simple way to calculate the investment return of a particular financial product, but it’s not terribly accurate. Why not? Because it does not correspond to reality.

Why Wealth Taxes Have Always Been a Terrible Idea

Tavakoli Turns Her Fire From Crony Capitalists to Muslim Fundamentalists

Rates of return are representative of actual dollars and cents. They are a sort of “pre-knowledge” in that sense. When you average the growth rates in, say, the S&P 500 and calculate it as a simple average return over a specified number of years, you’re only getting information about the percentage rate involved, not the underlying monetary value that that percentage rate represents.

Look at it this way: If you applied the average (3.167 percent) to a sum of $10,000 for the six years illustrated above, you would end up with a total dollar amount of $12,057.15. Yet, if you follow each year’s actual gains and losses (what you would actually experience each year through the six years of investing illustrated here), you would end up with a different number: $11,496.04. And, if you introduce variability in return (the order and manner in which you receive returns), that further skews the end result — sometimes in a strongly negative direction.

This is a critical concept in finance, because it’s the only way to know, objectively, how much money you have (or will have) when you’re dealing with compound interest products. To willfully advocate the arithmetic mean over the geometric mean is unconscionable.

Nope. Not a chance. He freely admits on the show that he understands the difference between geometric mean and arithmetic mean, but that he chooses one calculation over another because it’s his show. Honestly, math doesn’t care whether or not it’s your show. The arithmetic mean does not correspond to real rates of return and that’s that. No amount of browbeating or foot-stomping is going to change that.

Of course, it’s impossible to know why Ramsey really favors one over the other. But there is an interesting explanation that fits: The arithmetic mean is always equal to or higher than the geometric mean. It makes future financial assumptions look a lot more optimistic, and it also makes for better ratings. If you can show numbers that support a 12 percent average rate of return for your clients or customers, that’s a lot better than what the rest of us have to offer.

But, while using simple averages might be cool enough for pontificating, it won’t help you make an objective financial plan — not when reality is being obfuscated.

What many Ramsey fans, and even casual admirers, might have to face is that Dave ought to know better. He holds himself out as a financial planner, as an expert. He gives advice to people. He should hold himself to a higher standard, but he doesn’t. He should be held, by others, to a higher standard. Oddly, he isn’t.

Stoffel’s headline is very accurate. Dave Ramsey’s advice is harmful — objectively. Ramsey is misleading people by giving them a false sense of hope. It was painfully obvious that Ramsey was more concerned about being right than he was about the truth. That’s ironic given what he preaches about day in and day out across his brand. 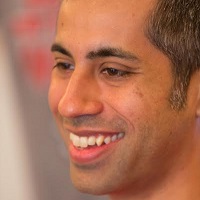 Tavakoli Turns Her Fire From Crony Capitalists to Muslim Fundamentalists